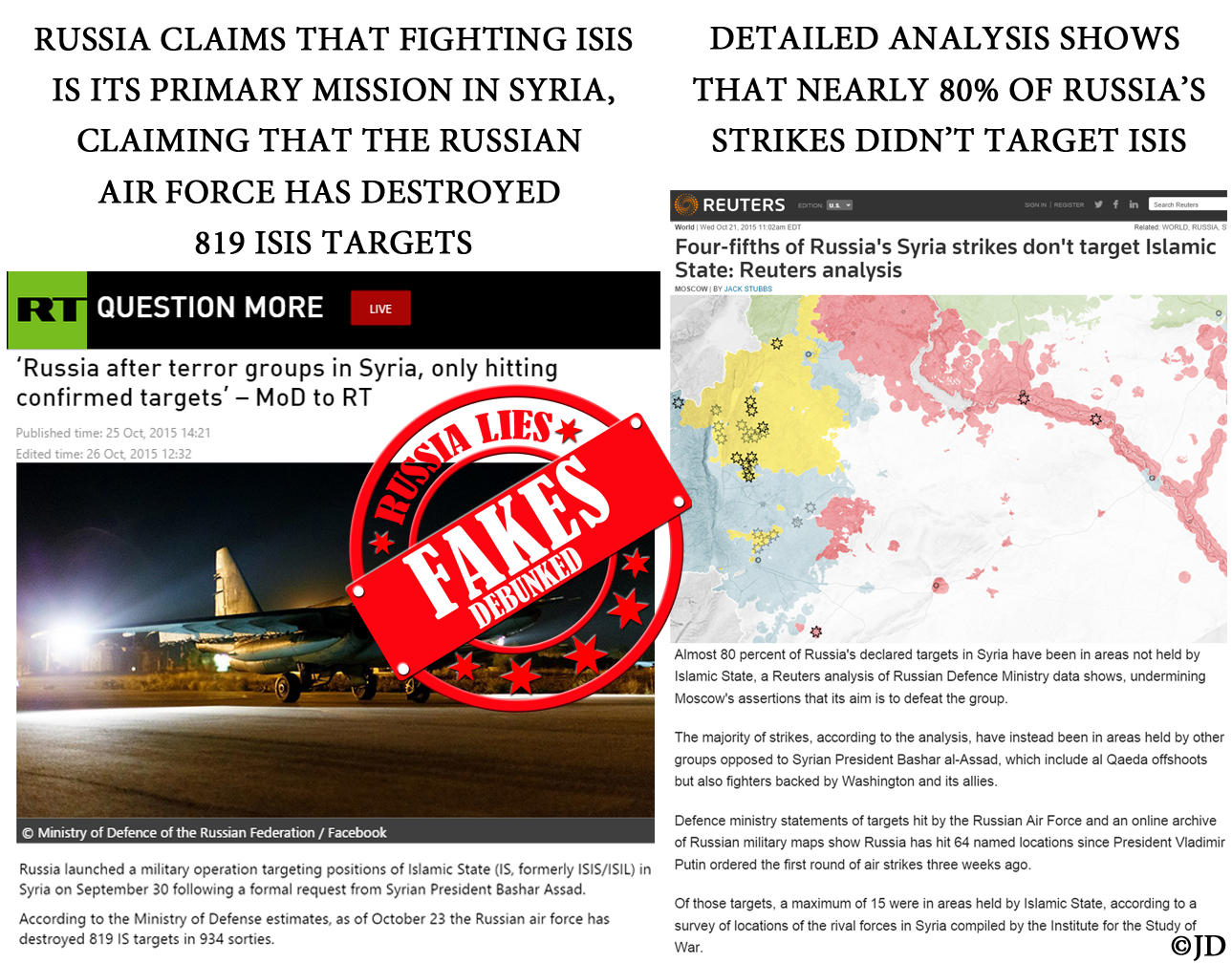 Russia repeatedly claimed that fighting ISIS is its primary goal in Syria. In fact, detailed analysis of the airstrike maps, based on the data provided by the Russian Defense Ministry, demonstrated that almost 80 % of Russia’s declared targets in Syria have been in areas not held by the Islamic State. 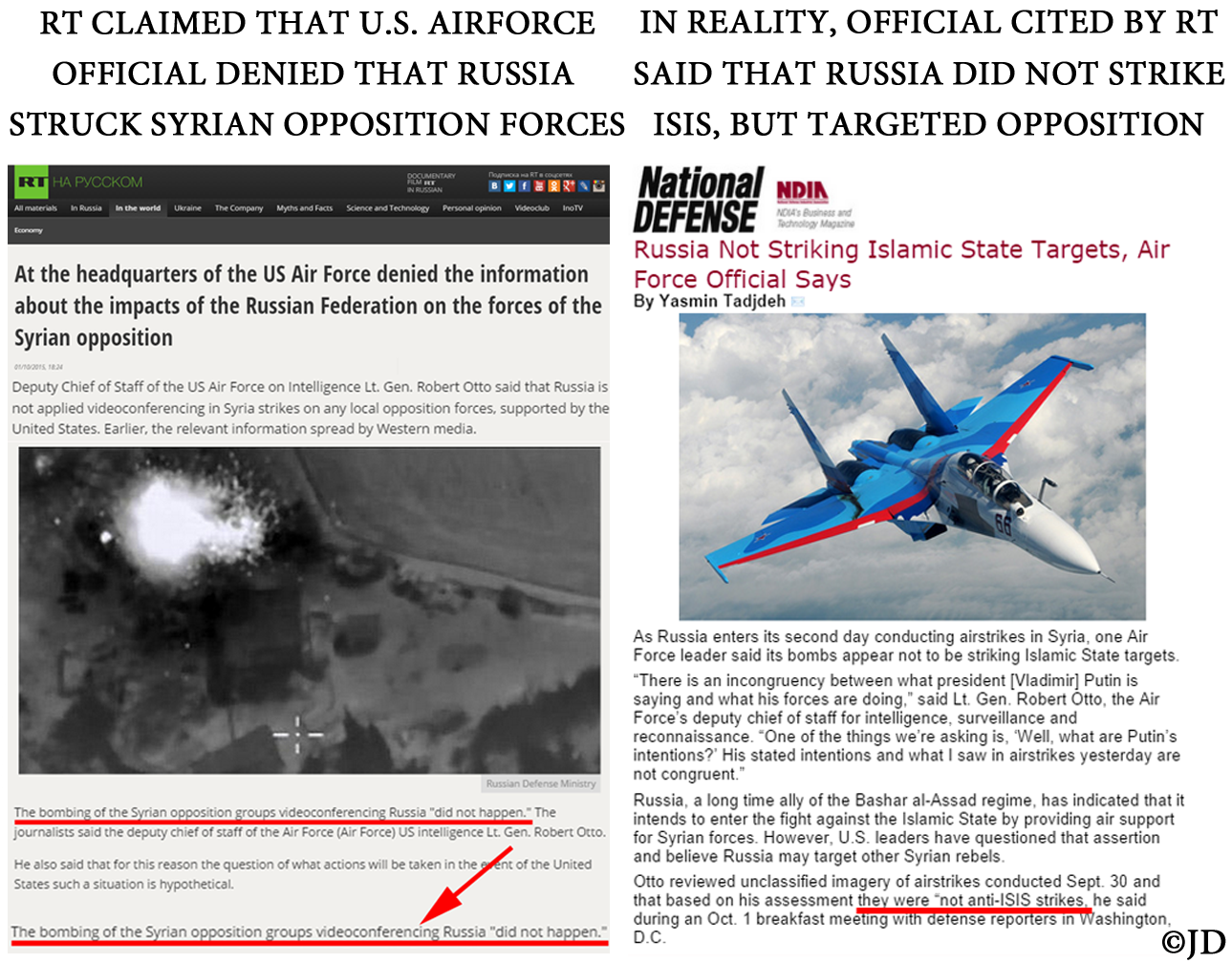 Compare RT’s version https://russian.rt.com/article/120558 with what was actually said: http://www.nationaldefensemagazine.org/blog/Lists/Posts/Post.aspx?ID=1974 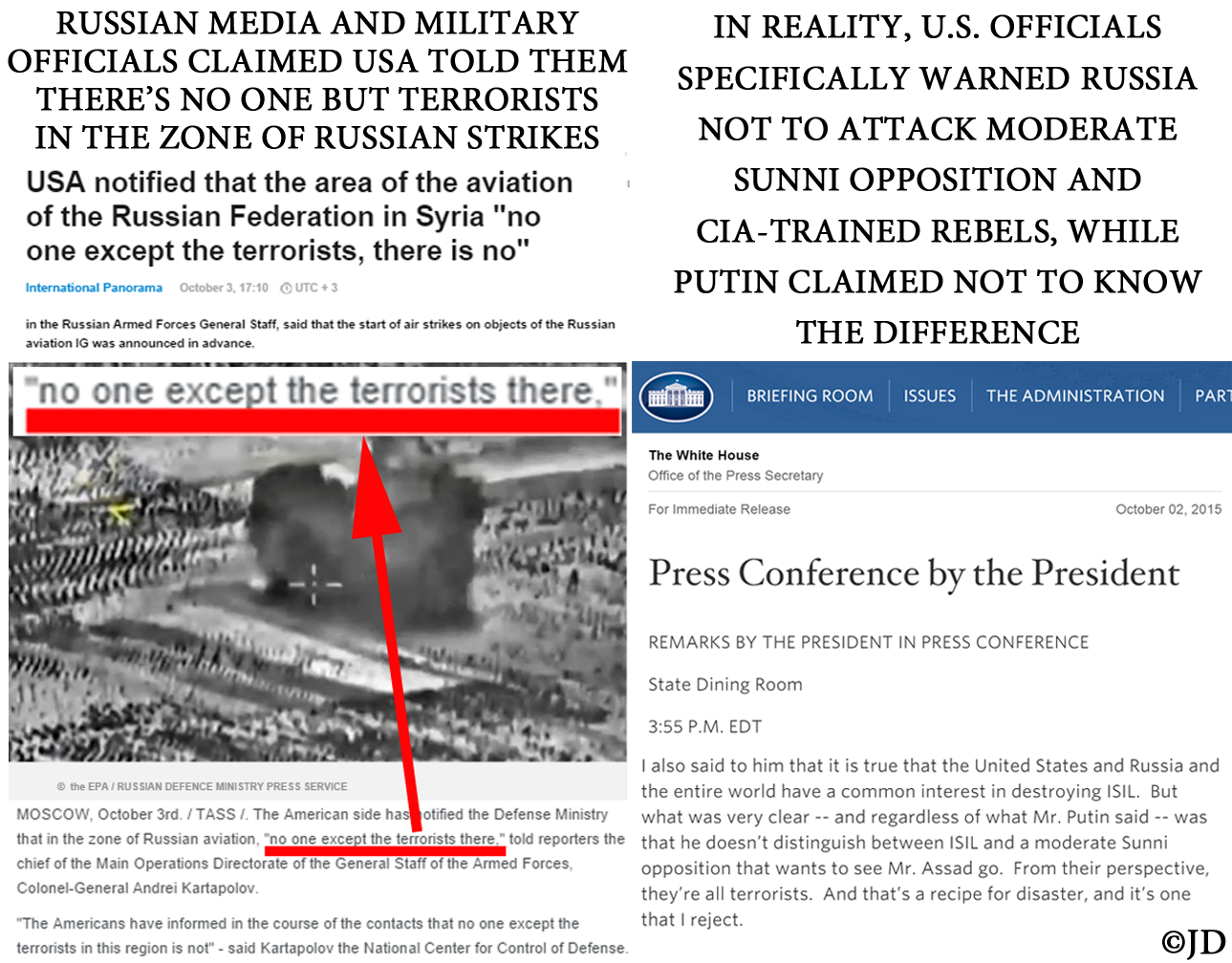 Did the U.S. tell Russia there’s “no one but terrorists” in the zone of their planned airstrikes? Quite the opposite!
What Russian media reported: http://tass.ru/mezhdunarodnaya-panorama/2316187
What Obama actually discussed with Putin: https://www.whitehouse.gov/the-press-office/2015/10/02/press-conference-president 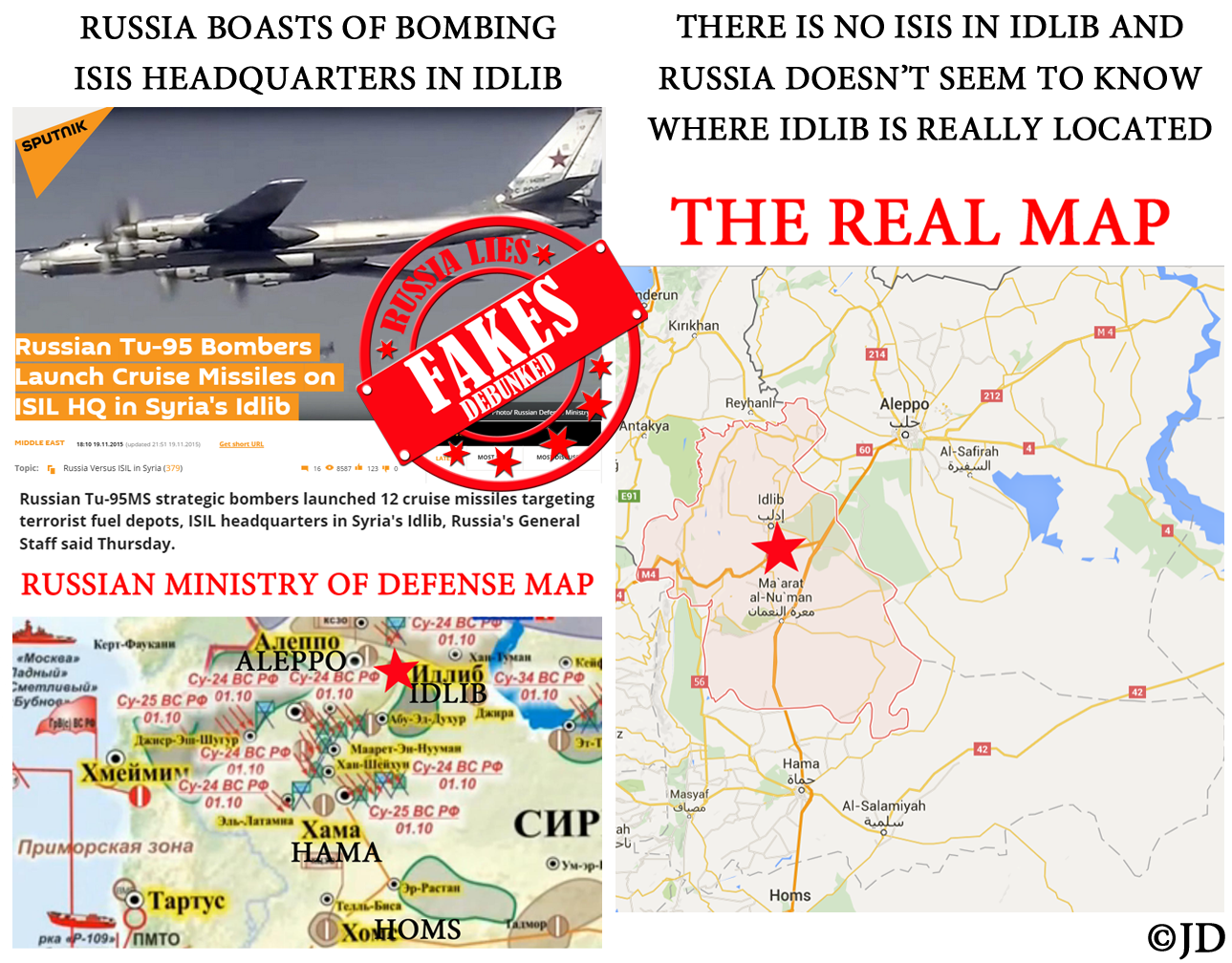 Russia boasts of bombing ISIS HQ in Idlib, Syria – except there is no ISIS in Idlib and Russia can’t even find it on a map.

Once this misuse of an unrelated photo was pointed out, RT removed it: 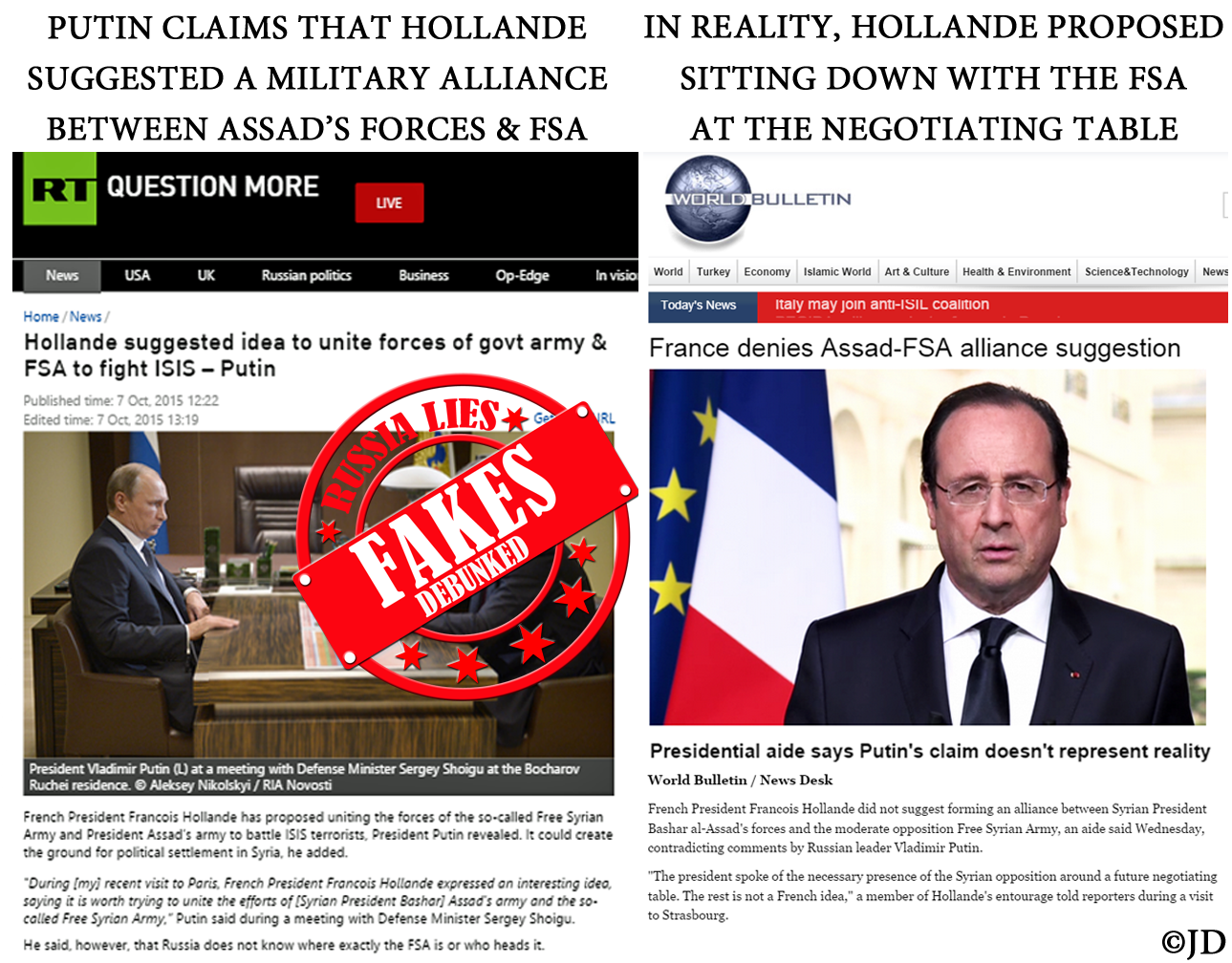 Did the French President suggest that Russia and Assad’s army join forces with the FSA, as Putin claims?

No, he didn’t. Hollande proposed sitting down with the FSA to negotiate, not joining together on the battlefield.

This appears to be a ploy by Russia to flush out the heads of the FSA and determine precise locations of its forces, in order to target them for Assad. Putin’s “call for cooperation” states that Russia does not know who heads the FSA and where its forces are located.

Did Pentagon really ask Russia to jointly coordinate strikes against ISIS, as Pravda claimed in this article?

Not even close! In fact, Russians proposed such cooperation and the Pentagon refused. Read more here: 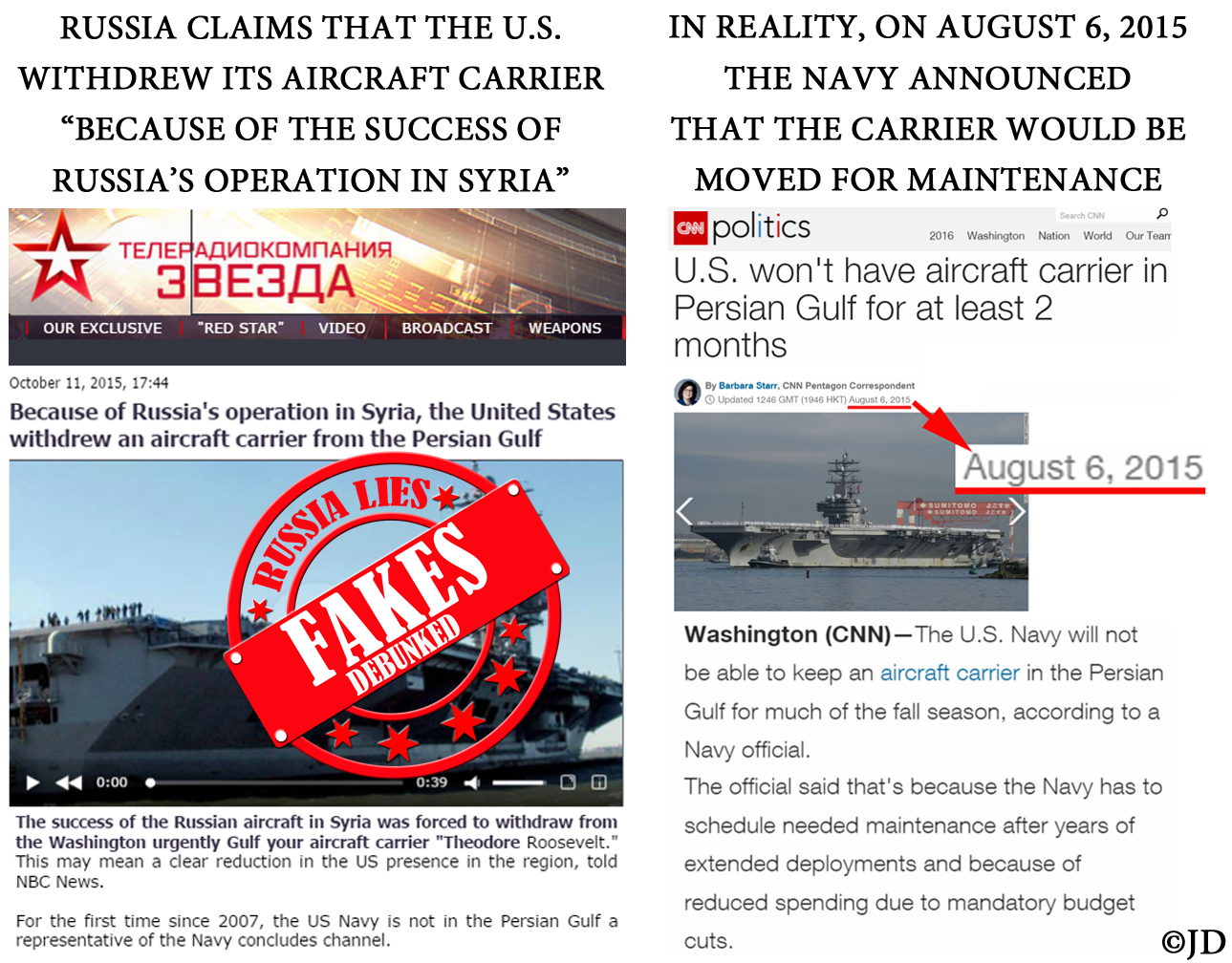 TV Zvezda and other Russian media outlets have claimed that the U.S. moved its aircraft carrier, the USS Theodore Roosevelt, because of “the success of the Russian aircraft in Syria.”

In reality, the carrier’s planned departure for maintenance was announced as early as August, 2015.

Russia claimed that the Free Syrian Army (FSA) envoys visited Moscow for negotiations. The FSA denied that any such meetings in Moscow ever took place. They further asserted that the person quoted in Russian media, Fahad Al-Masri, is “just some guy they found in Europe.” 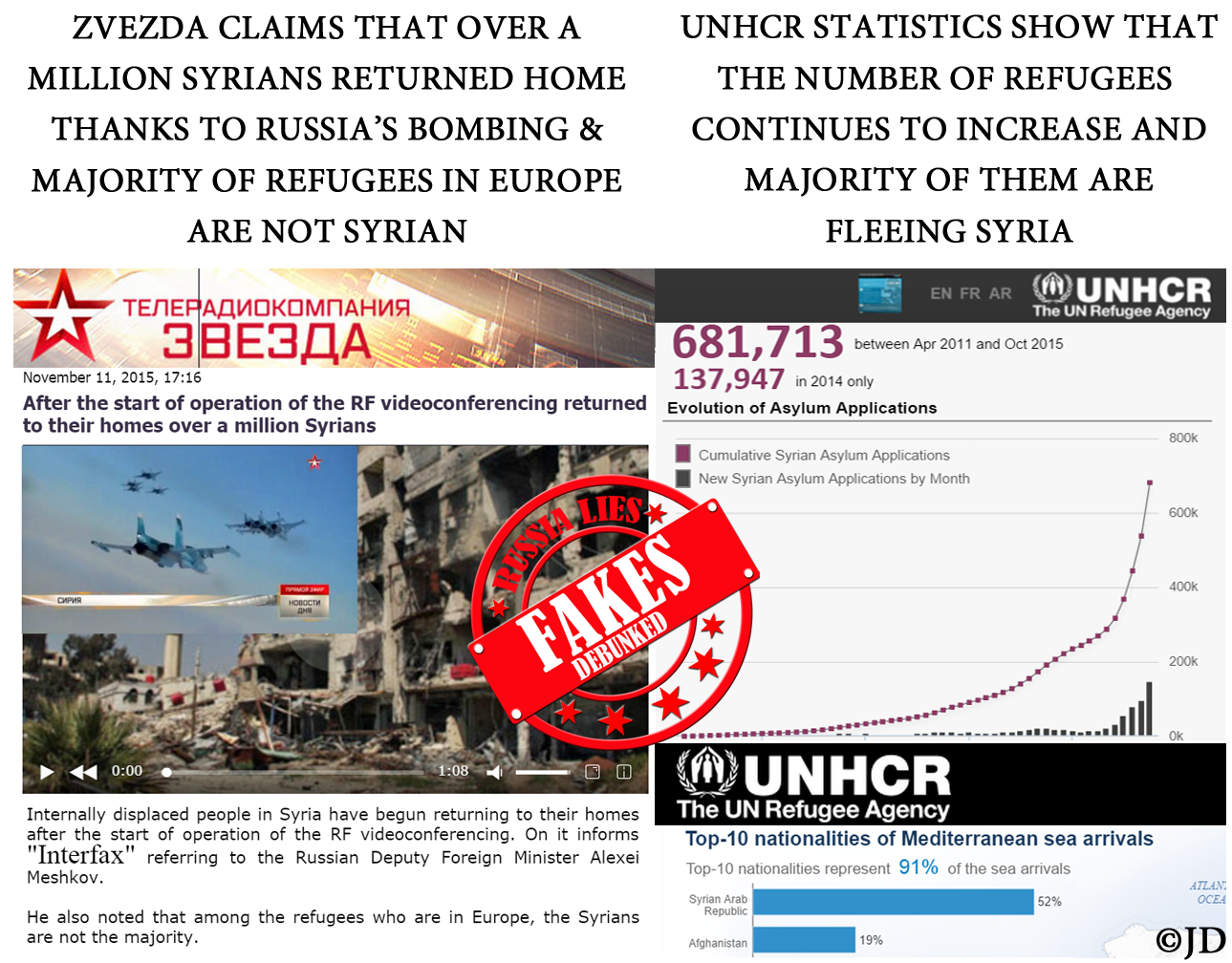 Russia claims that Syrians are so happy to be bombed, over 1 million of them returned to their homes in Syria.

UNHCR statistics clearly show that the number of refugees from Syria continues to increase:

UNHCR statistics also show that most refugees arriving to Europe are in fact fleeing Syria: 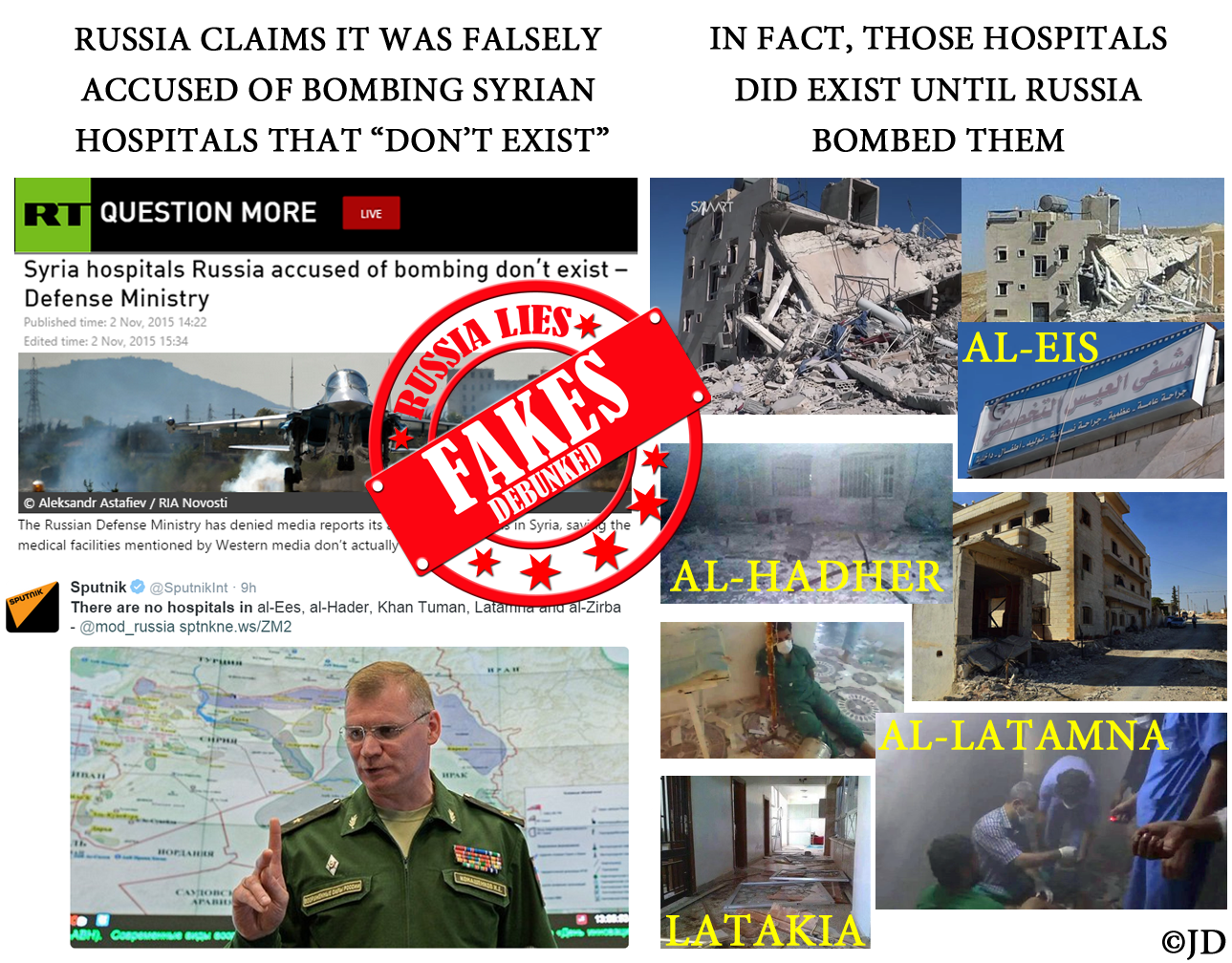 Russian media (including RT and Sputnik) claimed that Russia was falsely accused of bombing Syrian hospitals that “did not exist.” This brazen claim was clearly untrue, as the hospitals did exist, until Russia bombed them.

Statement – ER of #Douma forced to turn out of service due & after Airstrikes #Rif_Dimashq #Syria Oct29 pic.twitter.com/iX7lkZaTRd

In Oct 2 I think was friday, Russia carried out airstrikes targeting a ER in Alimdah @JuliaDavisNews https://t.co/bPgJsSBdWh

One thought on “Syria”