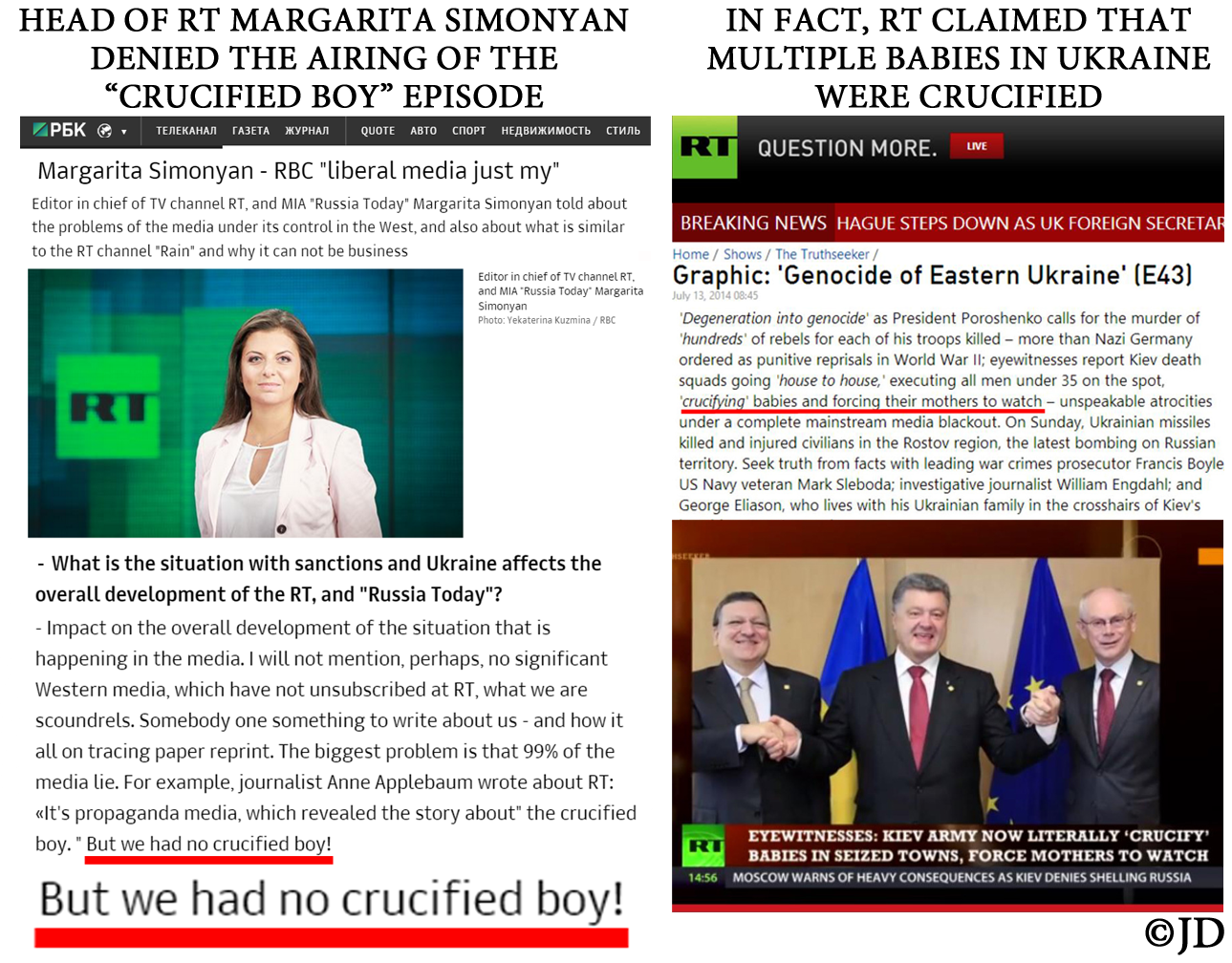 In fact, RT went beyond the crucified boy fabrication, falsely exclaiming that multiple babies were being crucified in Ukraine, with their mothers being forced to watch. RT later removed the video in question from their YouTube channel and deleted the article, admitting that the information in question was “uncorroborated.” 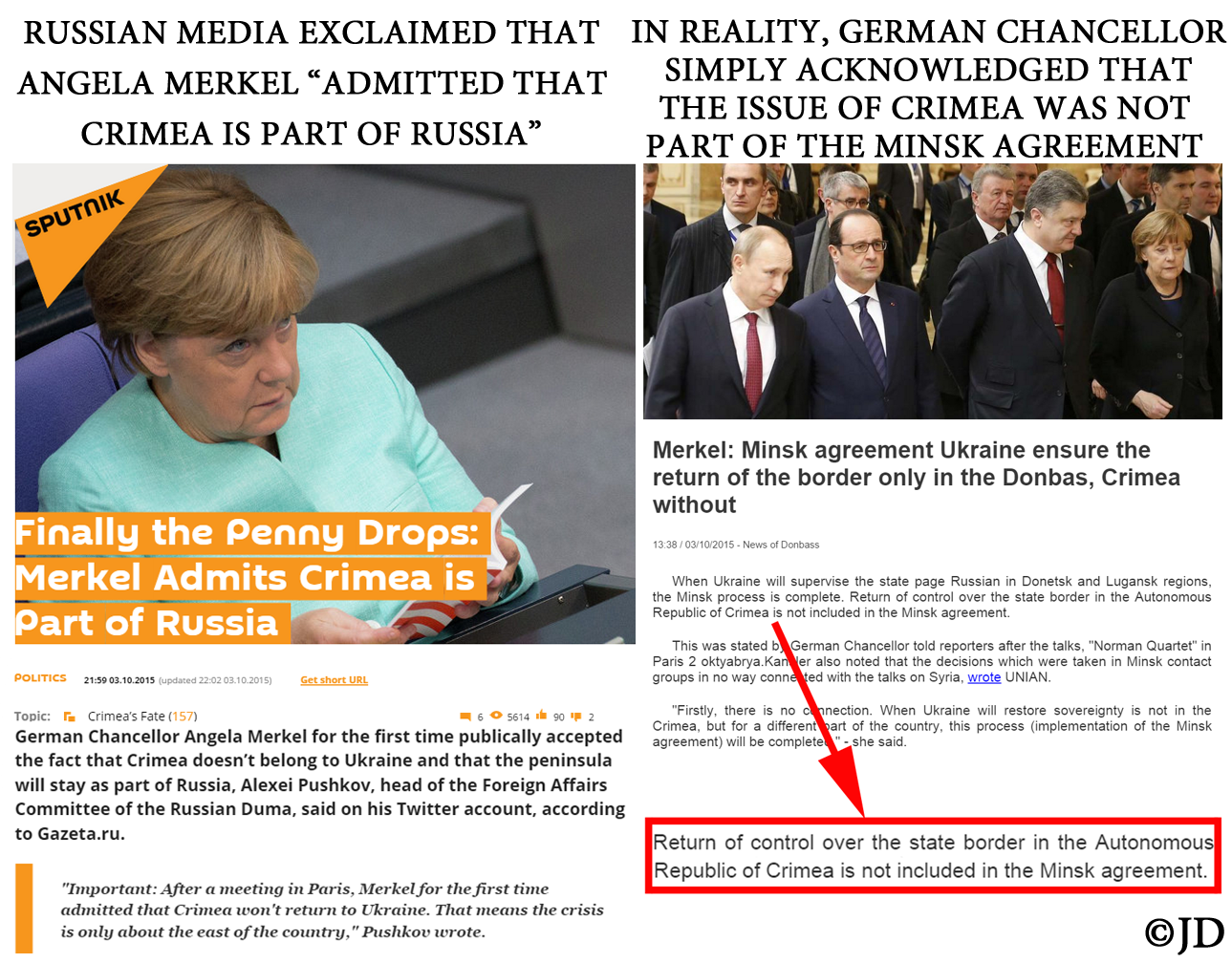 Russian media falsely exclaimed that German Chancellor Angela Merkel “publically accepted” that “Crimea doesn’t belong to Ukraine and that the peninsula will stay as part of Russia.” In reality, Chancellor Merkel made no such statement. She merely pointed out that the issue of Crimea’s illegal annexation was not part of the Minsk agreement and therefore wasn’t discussed at the time of the latest Normandy format meeting. The restoration of Crimea to Ukraine firmly remains on Germany’s agenda. 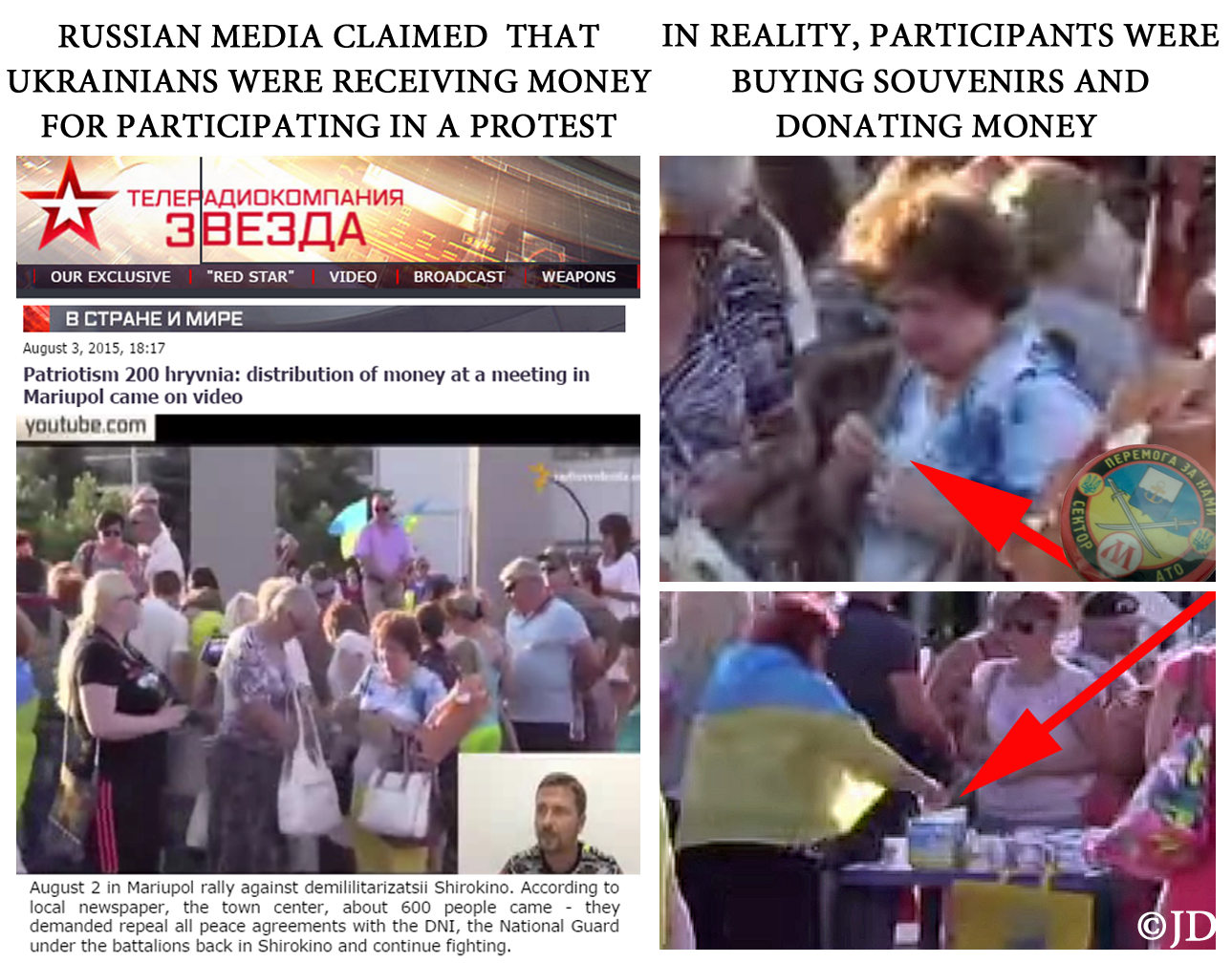 Russian media falsely accused Ukrainians of being paid to attend a protest. TV Zvezda claimed that protesters were paid on-camera for attending this protest. To the contrary, people had their wallets out because they were donating money and buying souvenirs. The video, used by TV Zvezda, was purposely cut to create the wrong impression. The uncut video clearly demonstrates that protesters were not being paid, but instead were donating funds and purchasing souvenirs (including pins) which were then pinned to their clothes (note 12:24, 1:48:01 and 1:47:57). 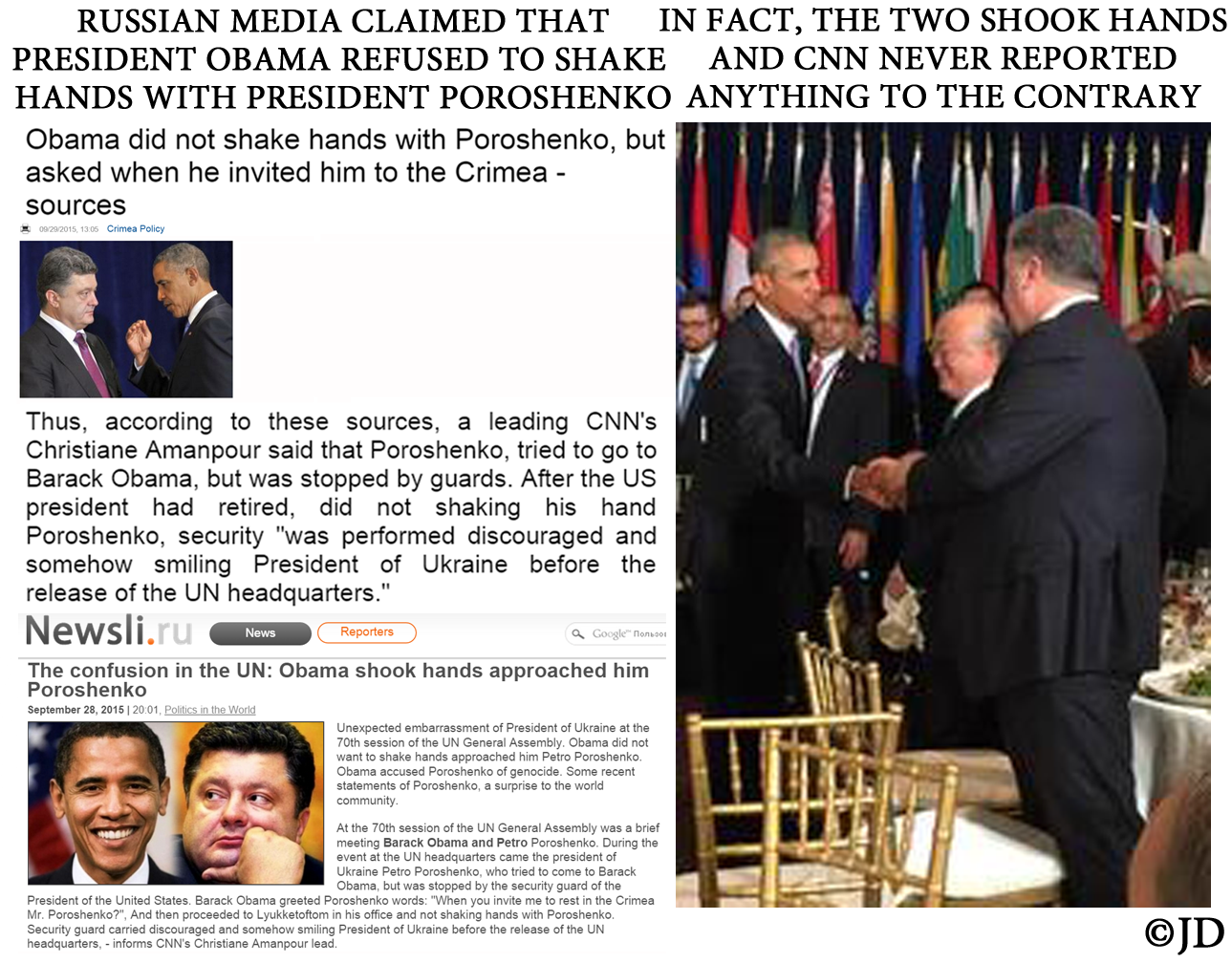 In reality, these reports were completely fabricated and never aired on CNN. President Obama and President Poroshenko shook hands and gladly conversed at the U.N. Their exchange did not include any requests to visit occupied Crimea. 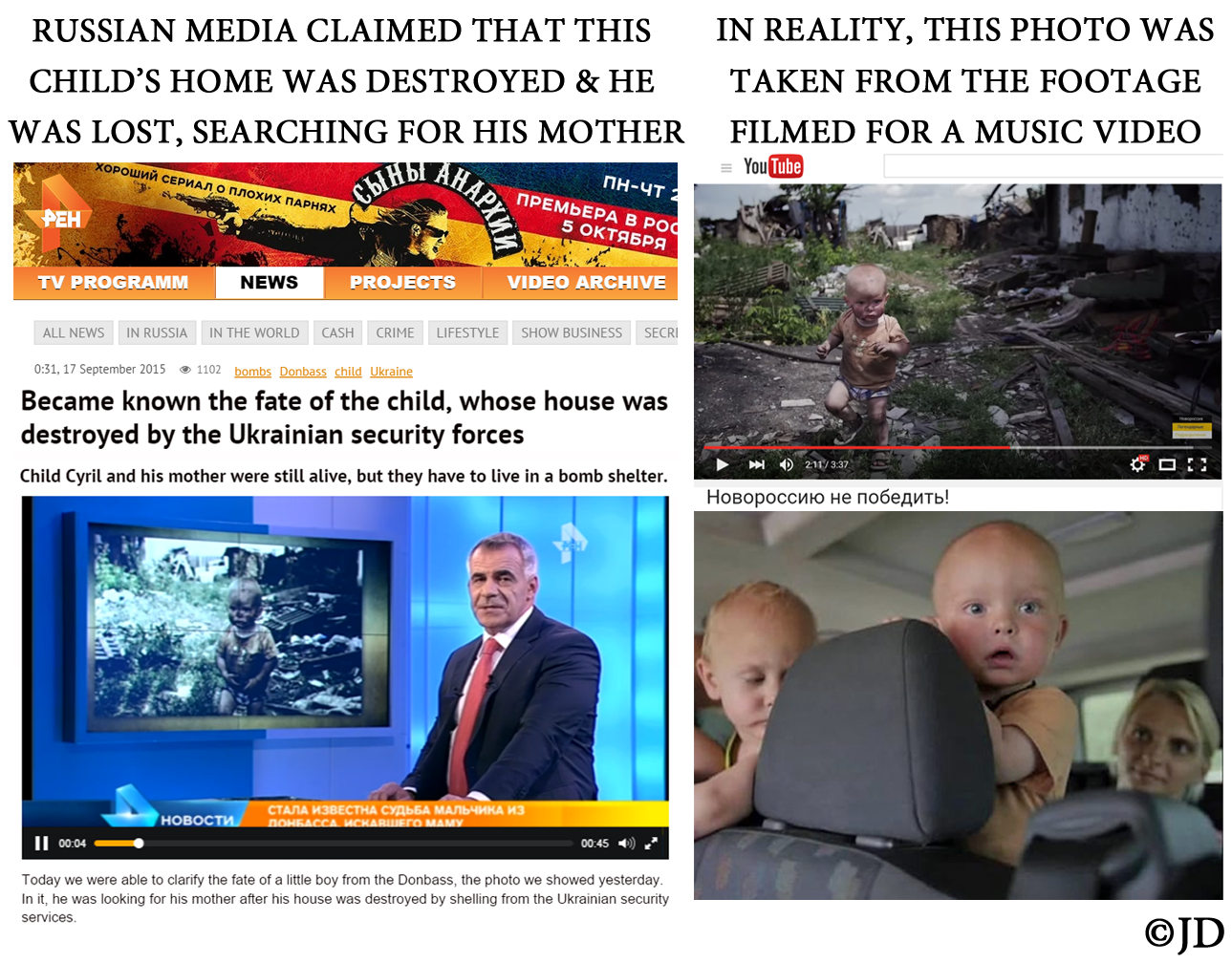 Russian propaganda is still fond of using children in order to evoke emotions, while disseminating disinformation. In this instance, REN TV aired the photo of a dirty baby boy, claiming that the child’s home was destroyed by Ukrainian security forces and he was wandering around, looking for his mother. In reality, the photo was taken from the fictitious footage, filmed for a music video. The child was brought to the filming by his mother. He was purposely dirtied and placed amongst the ruins and dilapidated buildings for shock value. 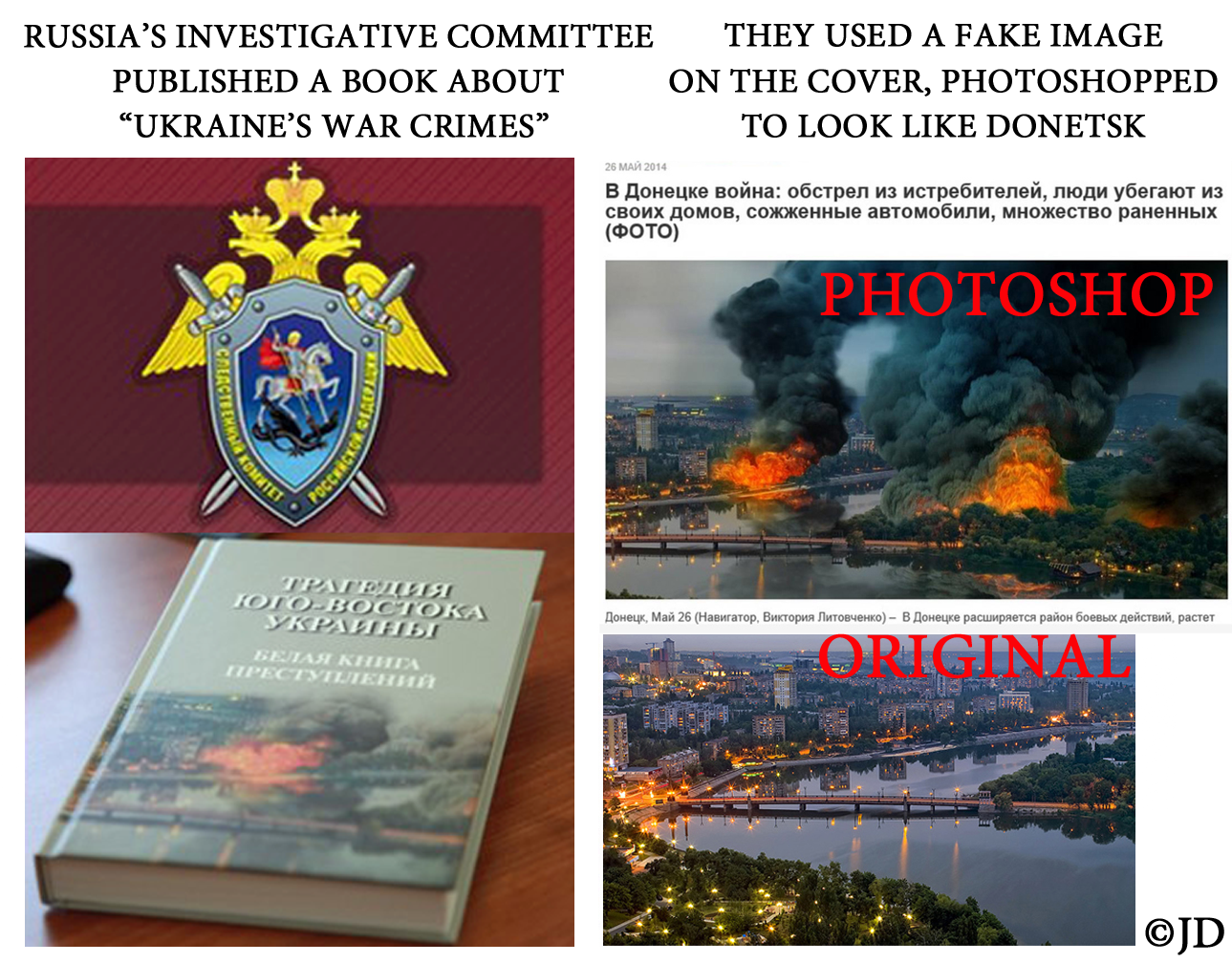 Russia’s Investigative Committee published a book entitled “The tragedy of Ukraine’s South-East: The White Book of Crimes,” using a Photoshopped image on the cover. This fabricated photograph was exposed in the very first installment of “Russia’s Top Lies About Ukraine.” The falsified cover is a strong indicator that the veracity of the book’s contents is highly questionable. 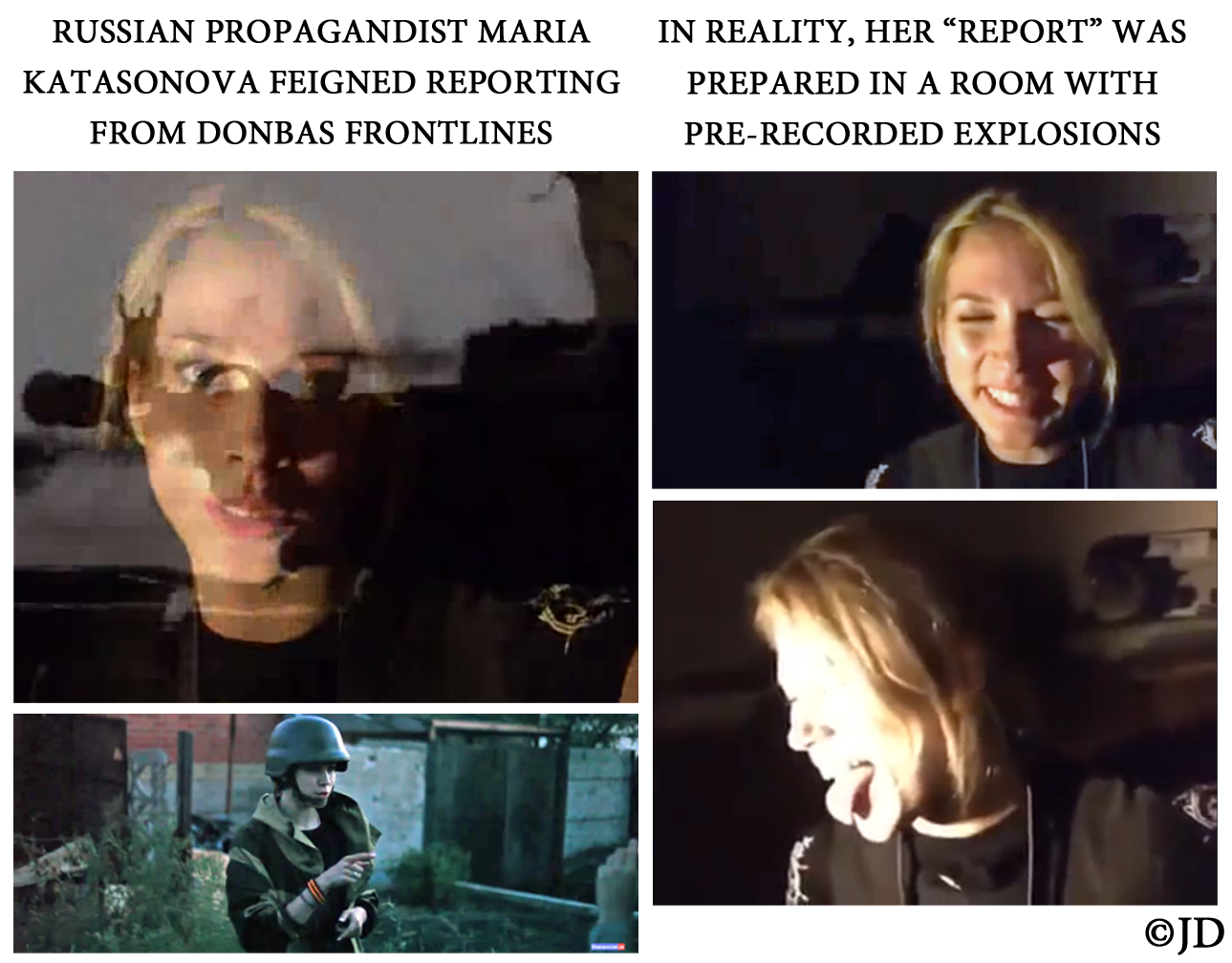 Notorious Kremlin propagandist Maria Katasonova, who works for a Russian MP Yevgeny Fedorov, was caught in the act of manufacturing anti-Ukrainian propaganda. Katasonova was pretending to be filming on the frontlines of Donetsk in Eastern Ukraine. She said: “We are now only 1,000 feet away from the front line, the Ukrainian army started shelling at 5 o’clock.” Suddenly, a light is switched on, revealing that the scandalous propagandist was recording the clip while standing in the room, with pre-recorded sounds of explosions playing in the background.

Russia’s mainstream media disseminated an outrageous tale, claiming that the downing of Malaysia’s Boeing (flight MH17) over Eastern Ukraine was “a special operation of the CIA.” This ridiculous claim was brought forth by Sergei Sokolov – the former bodyguard of Boris Berezovsky, the Russian oligarch who was found dead at his palatial Berkshire home in 2013. According to Sokolov, the CIA plan was to blow up the airliner from within, while simultaneously striking it with a missile from a Ukrainian “Buk”.

In an attempt to corroborate his outlandish claims, Sokolov produced audio recordings, purporting to contain the conversation between David Hamilton, an American consultant who worked in Ukraine last year for the National Democratic Institute, and David Loyd Stern, a broadcast journalist from Kansas who lives in Ukraine and has reported for the BBC from Kyiv. Sokolov baselessly accused both men of being “CIA spies.”

The man identified as Mr. Stern speaks with British accent, while the real Mr. Stern speaks American-accented English. Both men in the recordings don’t talk like native English speakers and use awkward dialogue and uncommon expressions. Bellingcat, the New York Times and Foreign Policy have reached the only plausible conclusion, declaring that the recordings were obviously fake. 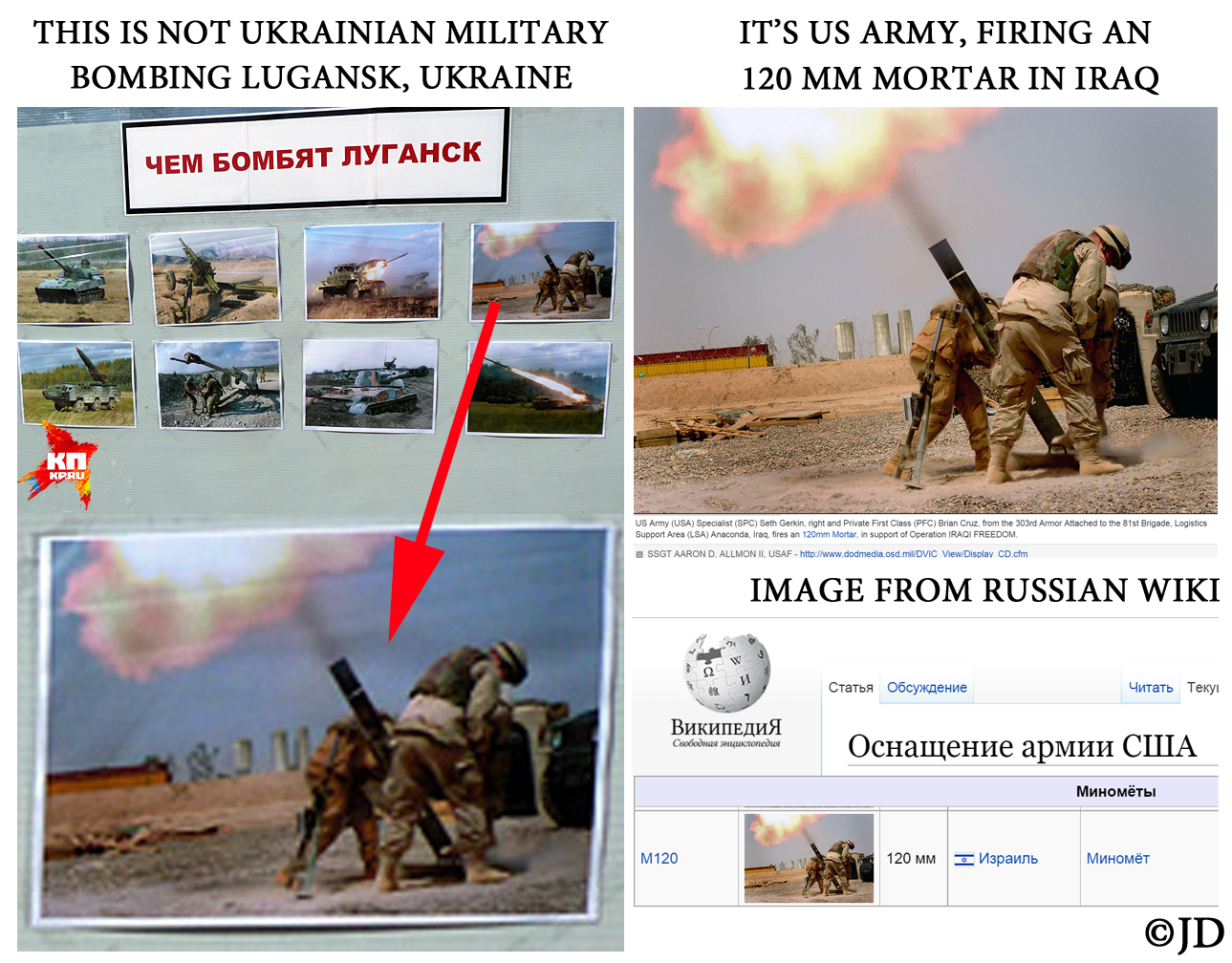 Komsomolskaya Pravda showcased an exhibit of the weaponry allegedly used by the Ukrainian military in Eastern Ukraine. In reality, at least one of the photos was lifted from Russian Wikipedia and shows the U.S. Army in Iraq, firing an 120mm Mortar during the Operation “Iraqi Freedom.” 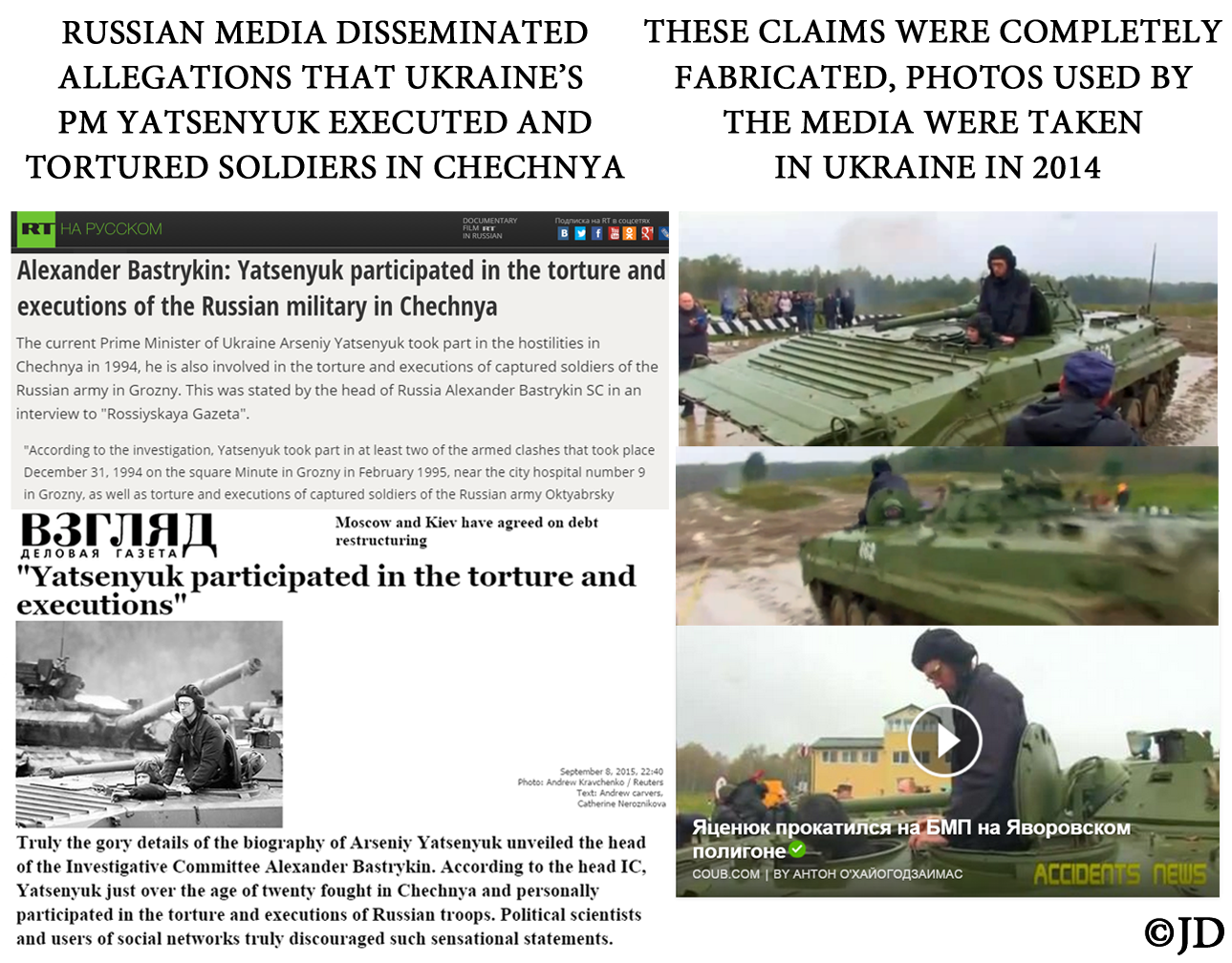 Russia’s mainstream media, including RT and Vzglyad, disseminated wild allegations against Ukraine’s Prime Minister Arseniy Yatsenyuk, made by Aleksandr Bastrykin, head of Russia’s Investigative Committee. According to Bastrykin, Yatsenyuk took part in armed confrontations, personally tortured and executed Russian soldiers in Chechnya in 1995. In reality, during the time period in question, Arseniy Yatsenyuk was a law student at the University of Chernivtsi in Ukraine. Yatsenyuk dismissed the claim as being completely untrue. The Prime Minister’s press secretary Olga Lappo wrote: “We advise the Russian regime to carry out a psychiatric assessment of the Investigative Committee Chief Bastrykin.”

Photos of Yatsenyuk riding in a tank, used by the Russian media to illustrate articles related to Chechnya, were taken from a 2014 video that was filmed in Ukraine. 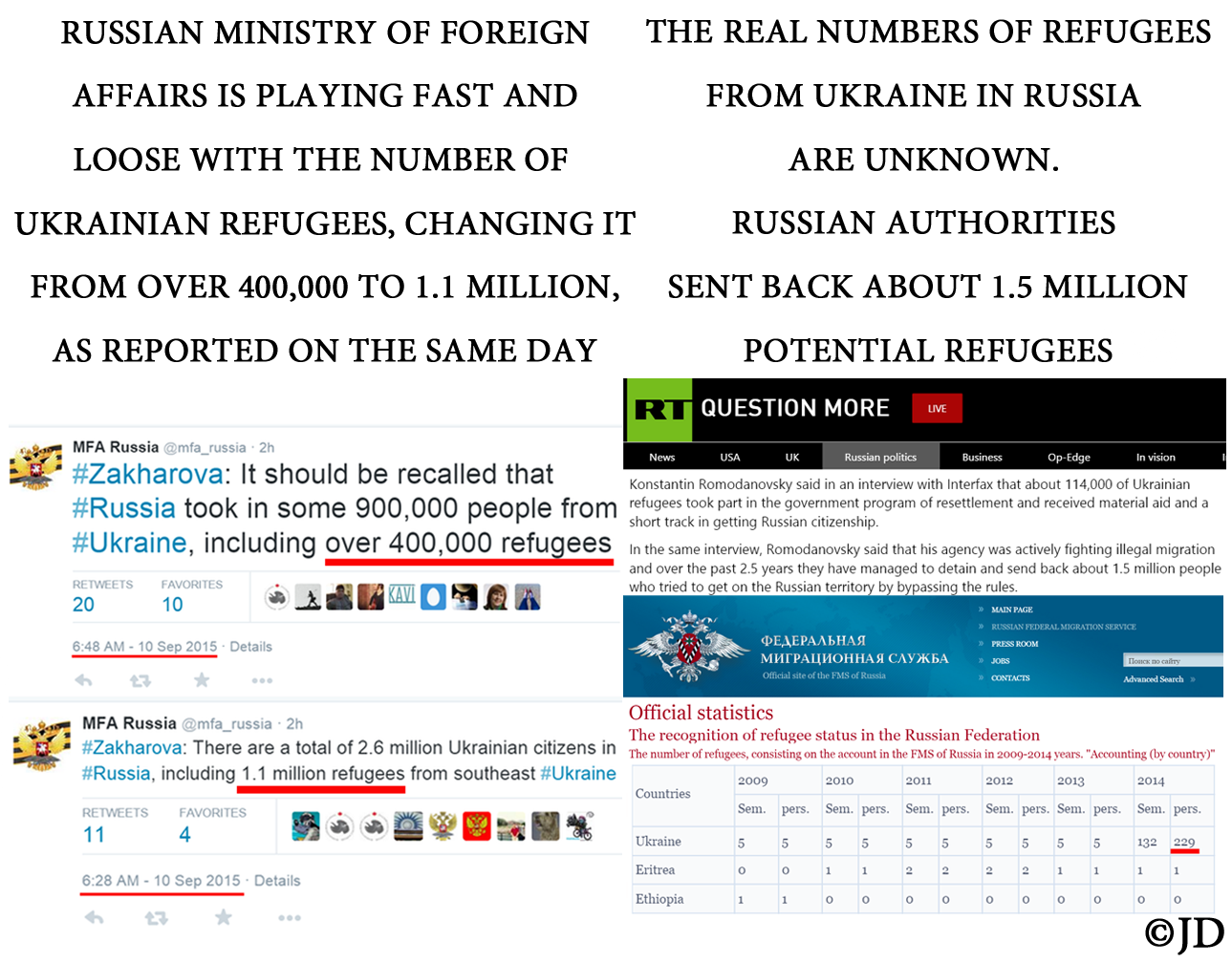 Russia’s Ministry of Foreign Affairs is playing fast and loose with the number of Ukrainian refugees for the sake of public opinion. On September 10, 2015 at 6:48 AM (PST), the MFA stated that “Russia took in over 400,000 refugees” from Ukraine. Only 20 minutes earlier, the MFA claimed that there are 1.1 million refugees from Ukraine, living in Russia. The actual number of refugees is unknown, since it is not up-to-date in Russia’s official database. During the past 2.5 years, Russia detained and sent back about 1.5 million people. 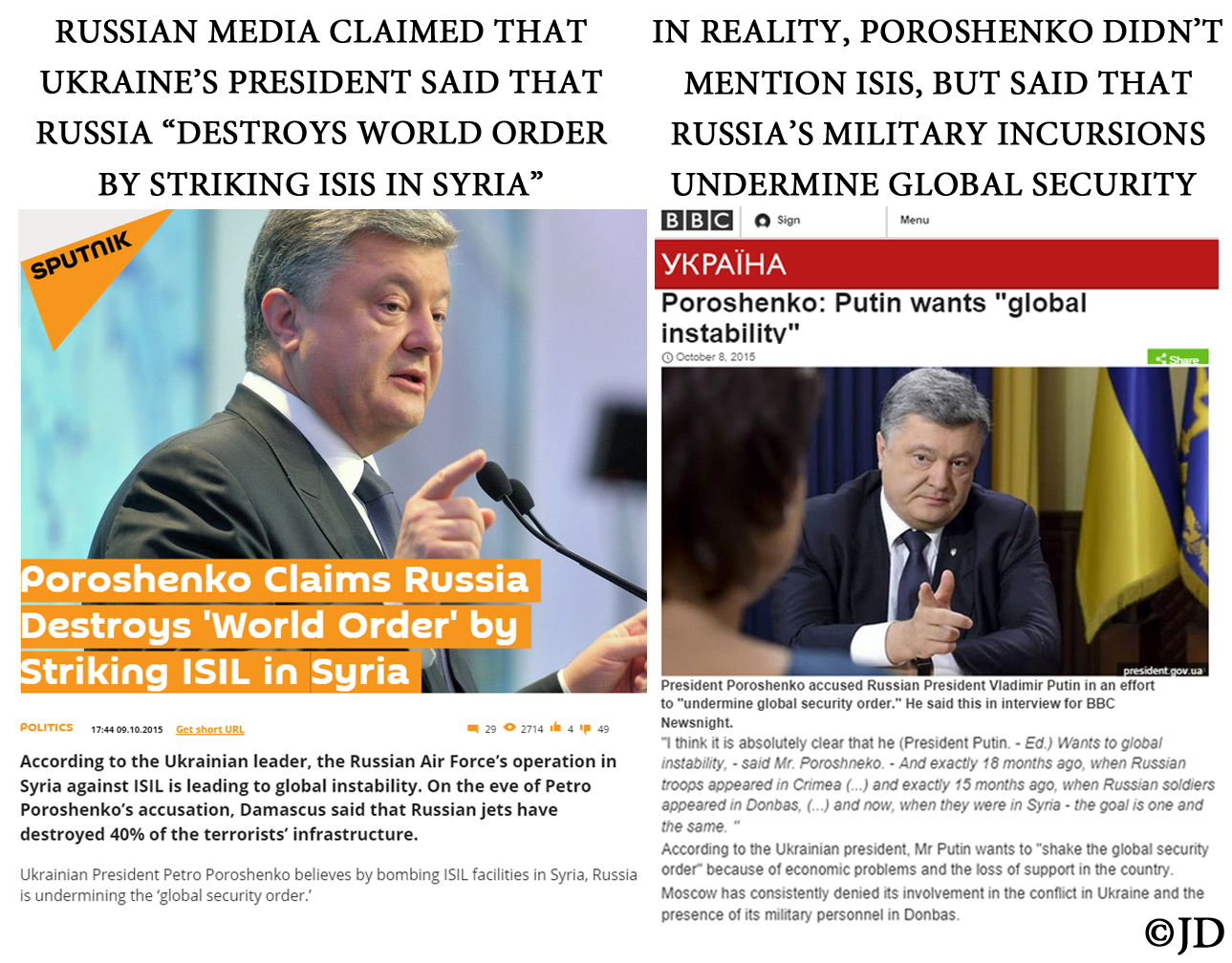 In reality, the Ukrainian President didn’t mention ISIS during the interview in question. He said that Russia’s military incursions undermine global security. 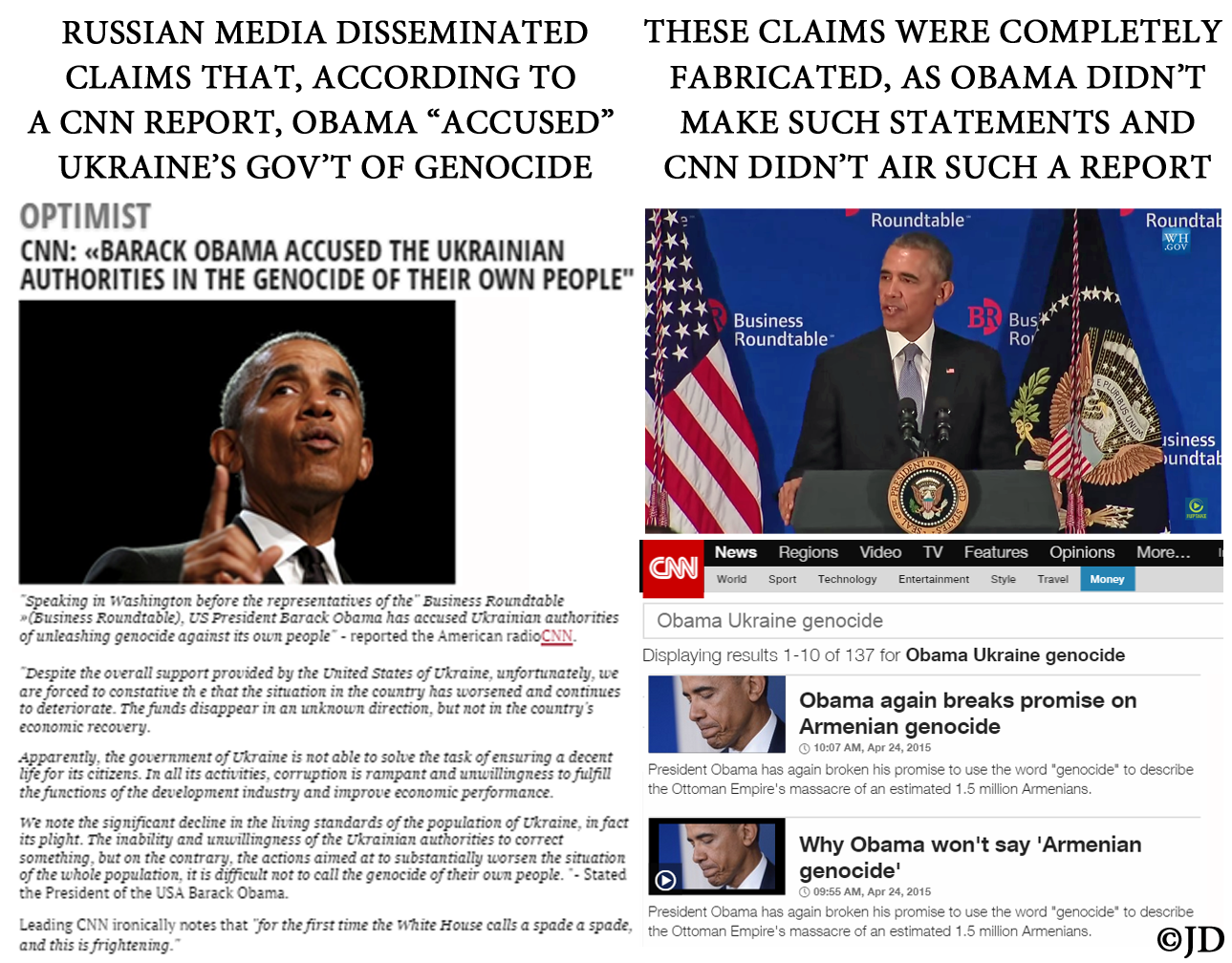 Russian media falsely claimed that President Obama accused the Ukrainian authorities of committing “genocide” against their own people.

They were referring to the President’s speech at the Business Roundtable, in which he did not make any such claims or accusations. 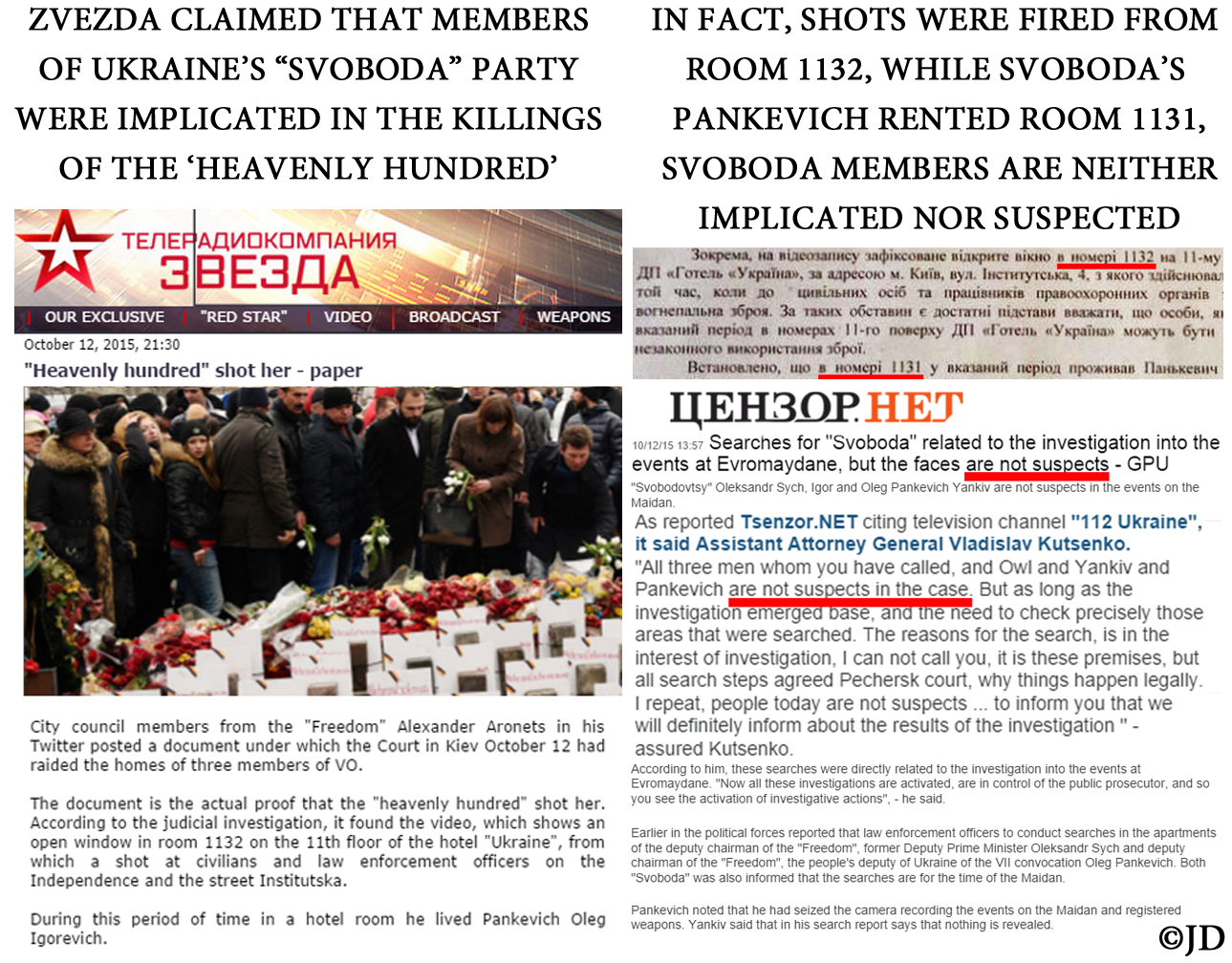 TV Zvezda claimed that recently issued search warrants prove that members of the ‘Heavenly Hundred’ were killed by their own, namely members of Ukraine’s “Svoboda” party.

In reality, documents show that members of “Svoboda” rented room 1131 – not 1132, from where the shots were reportedly fired.

Furthermore, the prosecutors confirmed that members of “Svoboda” are not suspects in the case at issue. 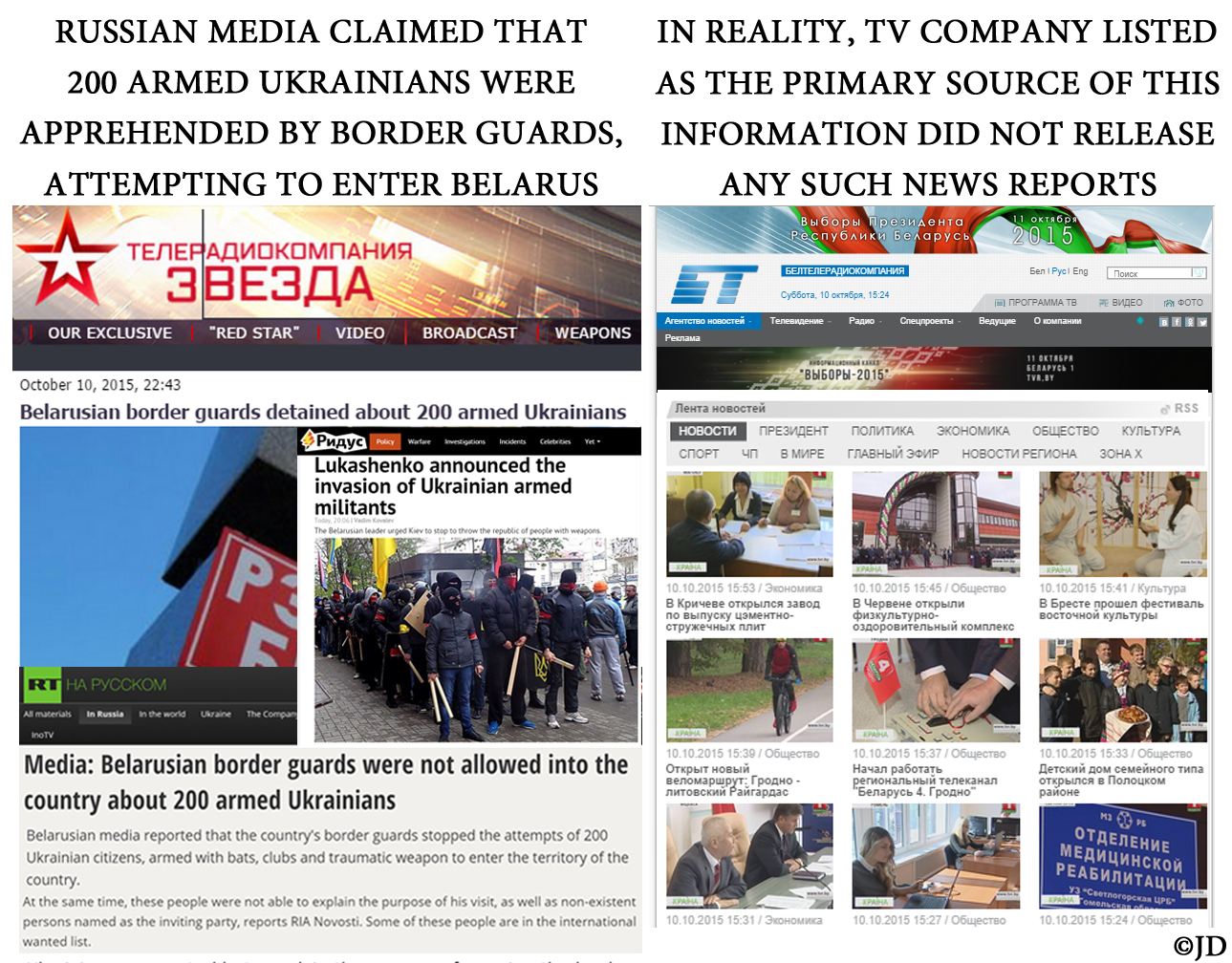 Just in time for presidential elections in Belarus, Russian media came up with an interesting fake to whip up the anti-Ukrainian hysteria. RT, RIA Novosti, TV Zvezda and others claimed that 200 armed Ukrainians tried to cross the border to Belarus and were detained by Belarussian border guards. Russian media outlets claimed that the information was originally reported by TV channel “Belarus 1.” In reality, this news channel never aired such a report.

The government border guard service of Belarus does not mention any “bands of armed Ukrainians” in their reports. In fact, the only cases of Ukrainians apprehended by Belarussian border guards were several berry-pickers and fishermen, who wandered across the border by mistake.

Russian media claimed that Russia’s GRU soldiers apprehended in Ukraine (Alexander Alexandrov and Eugeny Yerofeev), were exchanged for members of Ukrainian law enforcement held in Russia. The same claim was published by numerous outlets, including Echo of Moscow and notorious Lifenews.

In reality, there was no such exchange and both prisoners are still in Ukraine. Russian media outlets who reported the news never bothered to retract or correct their blatantly false stories. 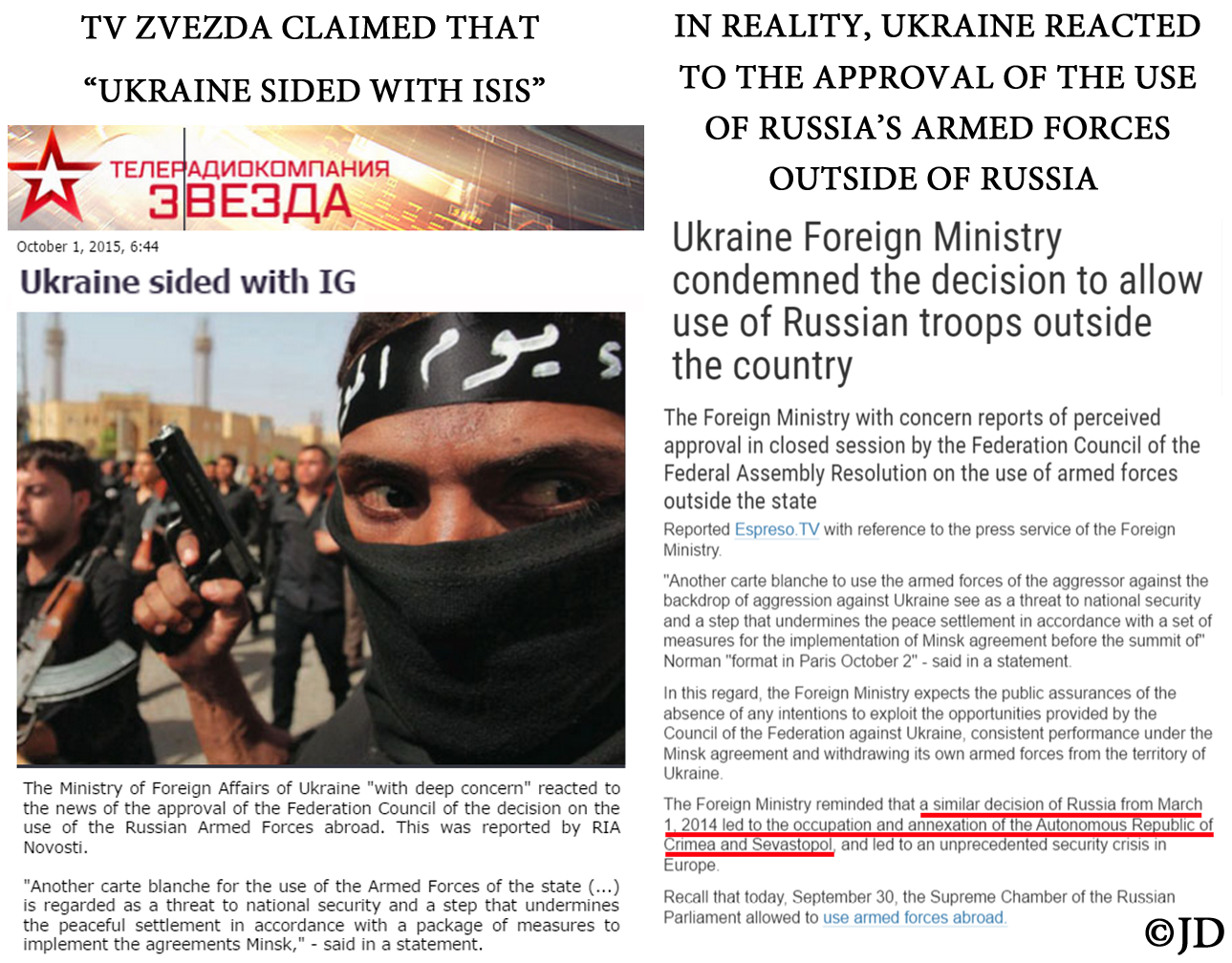 TV Zvezda proclaimed that “Ukraine took the side of ISIS,” because the Ukrainian government expressed concern about the resolution adopted in a closed session of Russia’s Federation Council, allowing the country’s armed forces to be used abroad. Ukraine had plenty of reasons to be concerned – however, none of those reasons had anything to do with ISIS. The last time Putin requested and obtained a resolution, permitting the use of Russia’s armed forces abroad, Russia covertly invaded and unlawfully annexed Ukraine’s Crimea.

RT aired an interview with Tony Gosling of Bilderberg.org, generosly identifying him as a “journalist.” Gosling alleged that the investigation into the downing of MH17 was “not conducted properly,” because it included only Netherlands. Gosling opined that a real investigation would have involved other countries, especially Russia. RT concurred with his representations, stating that “for unknown reasons” Russia’s position was not taken into account.

In reality, the MH17 inquiry involved investigators from seven (7) countries, including Russia. Every assertion made by Russian participants was considered in depth. Russia submitted numerous requests for corrections and amendments, all of which were addressed with great specificity. 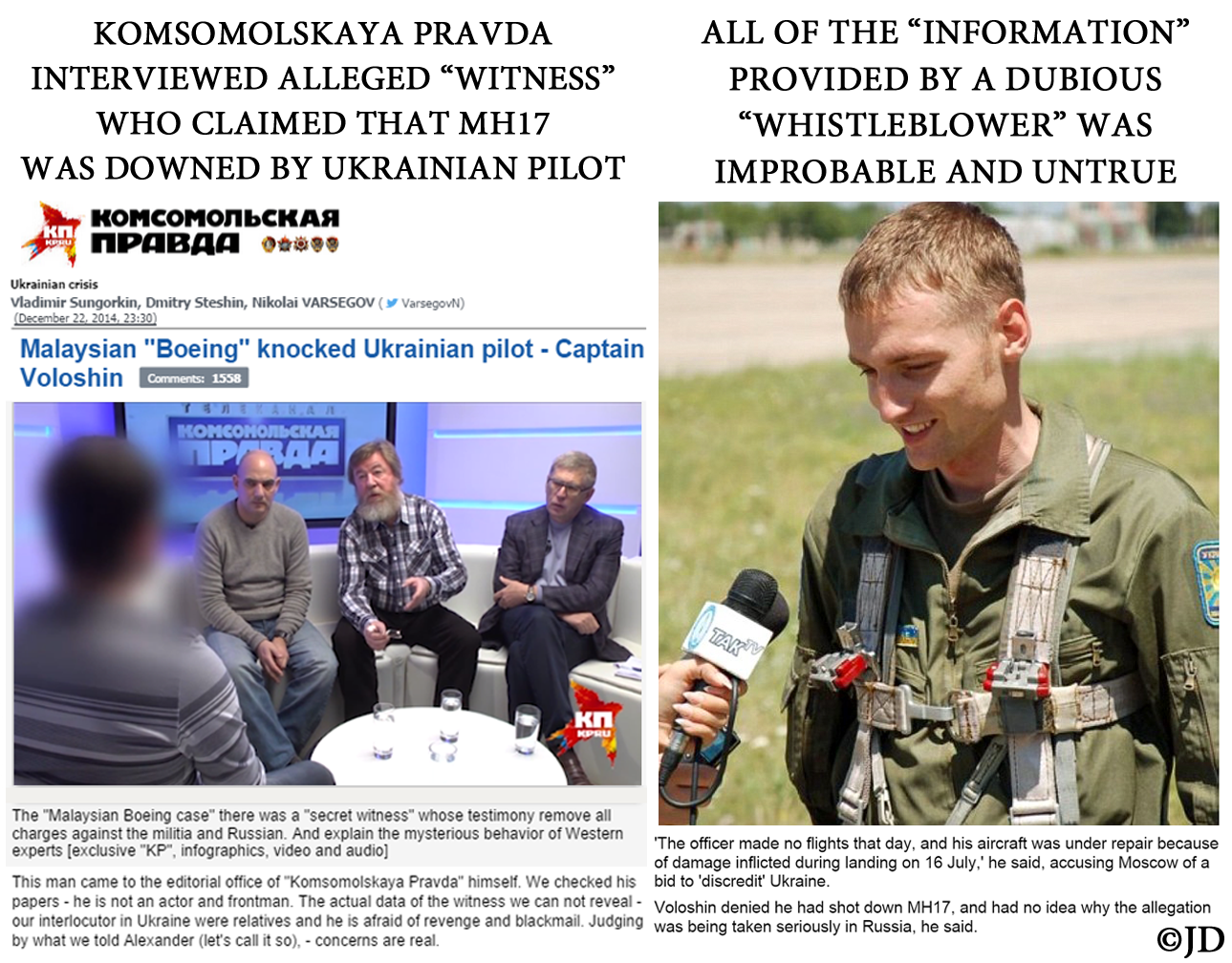 In the days following the downing of MH17, the Russian media went into overdrive, manufacturing numerous outlandish theories. One of such tales involved an unnamed character, who gave an interview to notorious Russian propaganda outlet, Komsomolskaya Pravda, claiming that MH17 was shot down by Ukrainian pilot, 30-year old “Captain Voloshin.” His story is not even remotely believable, since this alleged “witness” falsely claimed that Ukrainian planes, SU-25, were continually bombing Lugansk and Donetsk “on a regular basis.” In fact, the Ukrainian military never used their aircraft to bomb any of the terrorist-controlled territories. Ukrainian planes and helicopters were used only for transporting cargo and personnel. For added benefit, this “witness” alleged that the Ukrainian military regularly uses thermobaric weapons and cluster bombs. The fake “whistleblower” alleged that two Ukrainian planes were shot down by Russian fighter jets and Captain Voloshin fired back, accidentally hitting the Malaysian Boeing instead.

Vladislav Voloshin and his commanders vigorously denied every aspect of this crudely manufactured stunt of Russian propaganda. The Ukrainian military did not engage in any aerial combat throughout this conflict, quite simply because Russian terrorists in Ukraine have no airforce of any kind. This makes any allegations of the Ukrainian military targeting nonexistent planes of enemy combatants especially absurd. Russian warplanes are not known to ever engage in aerial combat with the Ukrainian airforce. Multiple Ukrainian airliners were shot down by terrorists from land, utilizing surface-to-air missile systems. 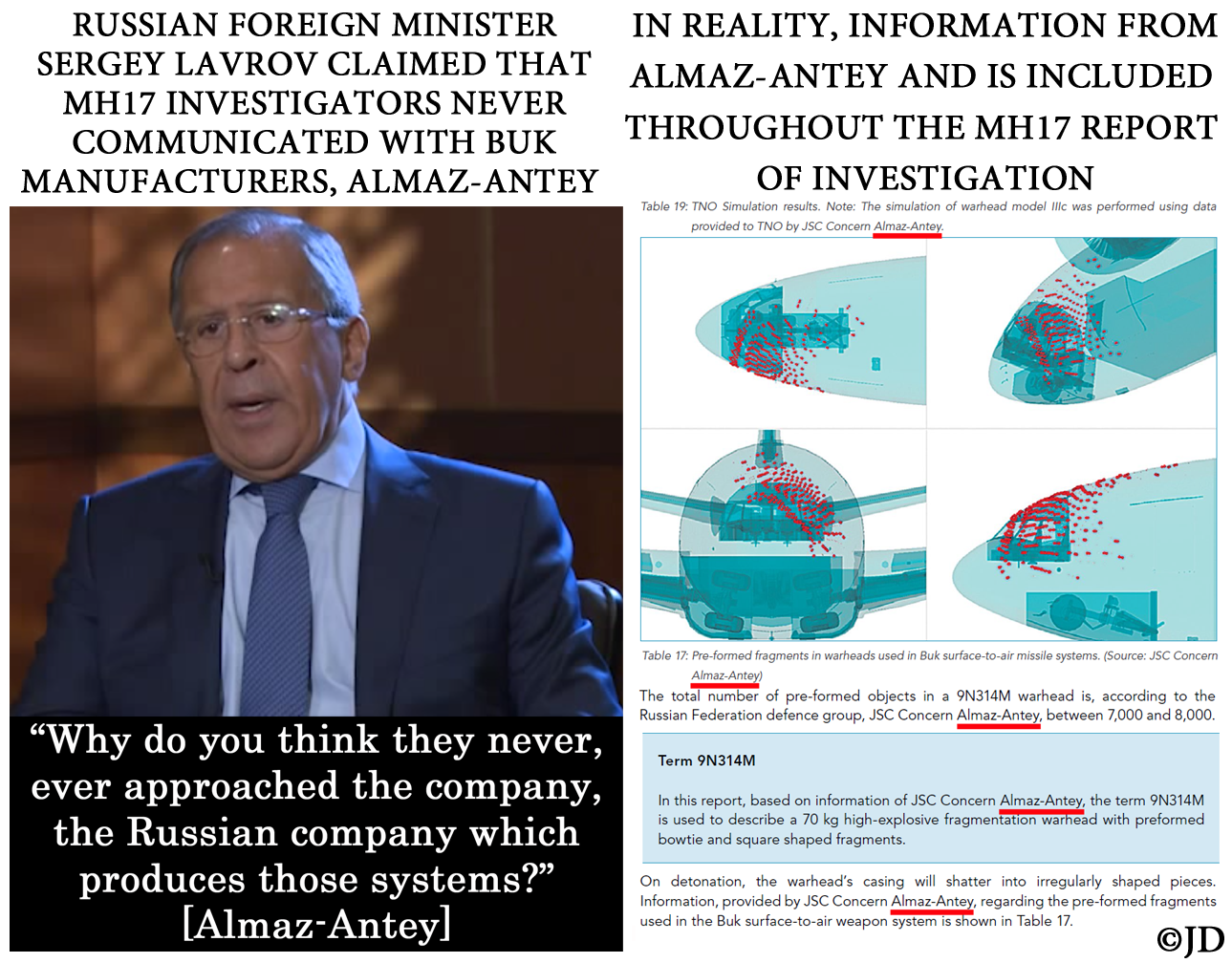 Russian foreign minister Sergey Lavrov claimed that the international MH17 investigative team ignored the Buk manufacturers, Russian company Almaz-Antey, not taking their information into account. In an interview, Lavrov said: “Why do you think they never, ever approached the company, the Russian company which produces those systems? [Almaz-Antey] The company itself conducted its own study and they presented the results in June this year, but the fact that the investigators didn’t ever approach the company which produced the system from which the investigators say the plane was hit is causing a lot of questions.”

This claim is completely false. The final report of MH17 investigation is replete with references to Almaz-Antey and the information they’ve provided, thoroughly analyzing and considering manufacturers’ data. Contrary to claims in the Russian media, the information offered by Almaz-Antey was neither “ignored” nor disregarded.

Read the next installment here: http://www.russialies.com/russias-top-200-lies-international-edition/