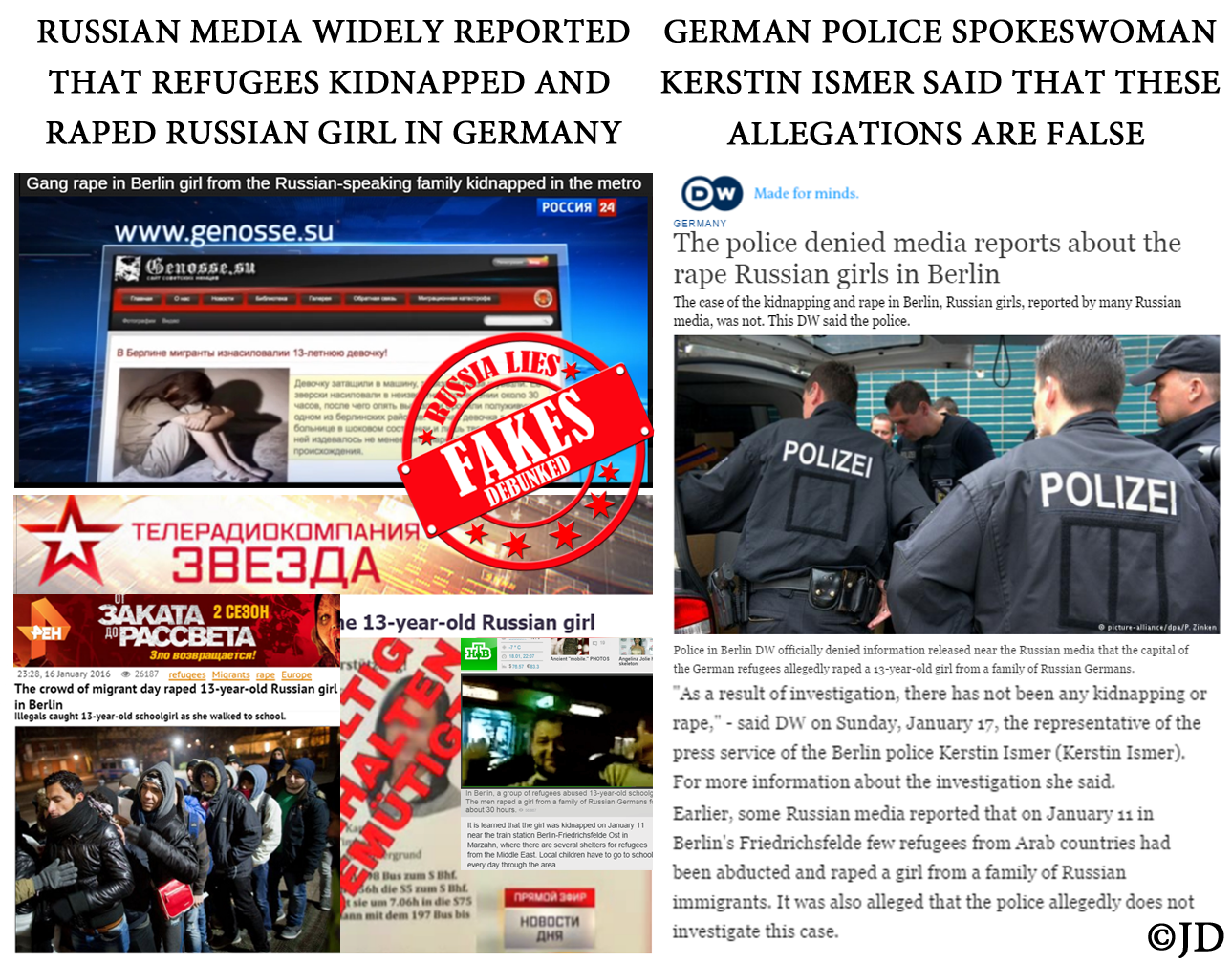 Russian media widely reported that refugees in Germany kidnapped and gang-raped a 13-year-old Russian girl. These claims were disseminated as irrefutable facts by numerous Russian mainstream media publications, including Vesti, TV Zvezda, NTV, REN TV, Channel 1 and others. Russian TV shows used the video, purportedly depicting the confession of a migrant, admitting to the gang rape in question.

Having investigated these allegations, German police officially refuted them. “Confession of a migrant,” used by Russian media outlets to substantiate their allegations, was taken from a 2009 video. 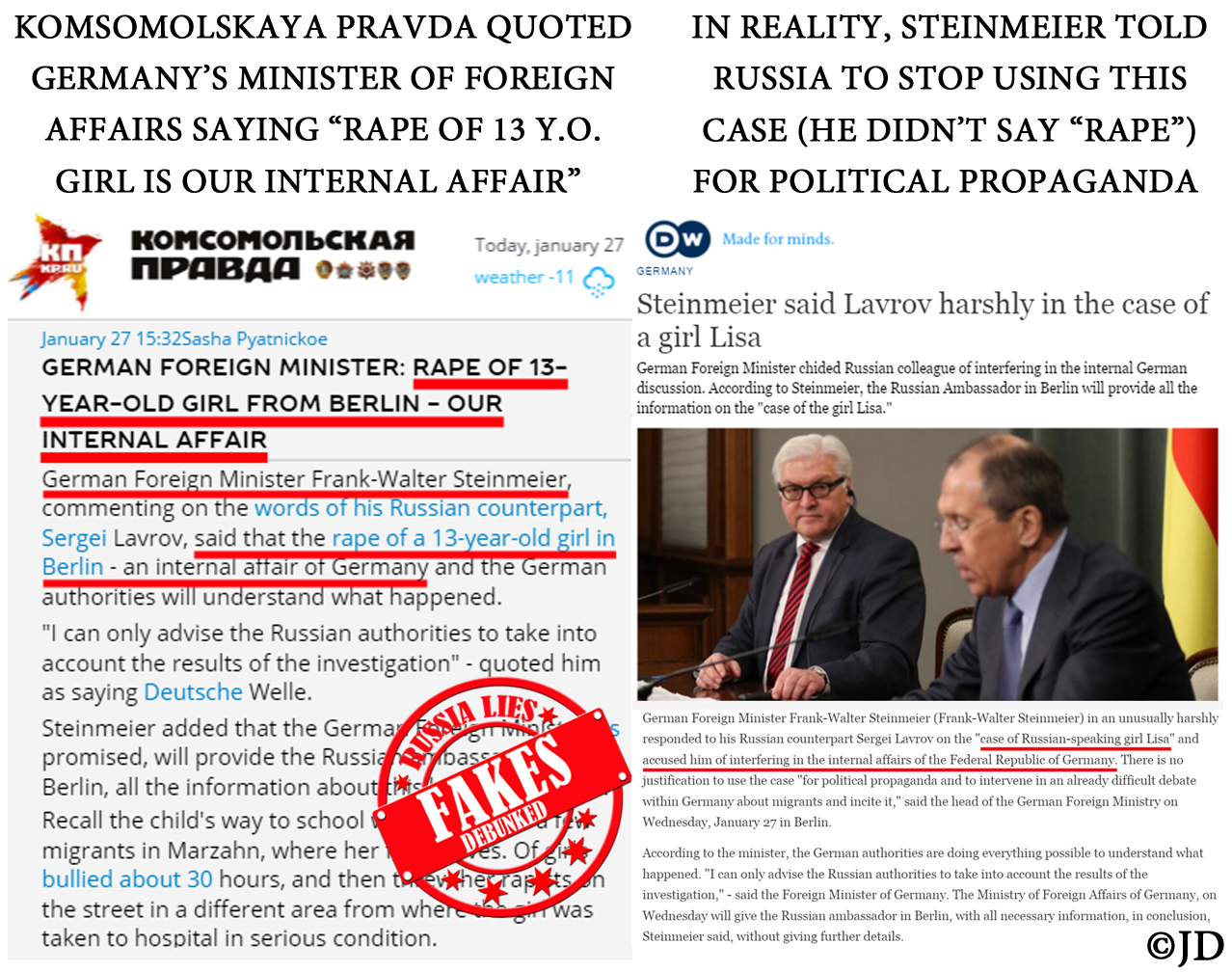 “Komsomolskaya Pravda” deliberately misquoted statements by Germany’s Foreign Minister, Frank-Walter Steinmeier, claiming that he said: “The rape of a 13-year-old girl from Berlin is our internal affair.”

In reality, Steinmeier said that this case (not “this rape”) is Germany’s internal matter that is being investigated and Russia should stop using it for political propaganda. Germany still insists there was no kidnapping or rape in this instance.

Investigation by German law enforcement officials determined that the girl (Lisa) deliberately hid from her parents at her friends’ house, because the school was about to notify Lisa’s parents about her learning issues. She was neither kidnapped nor raped. 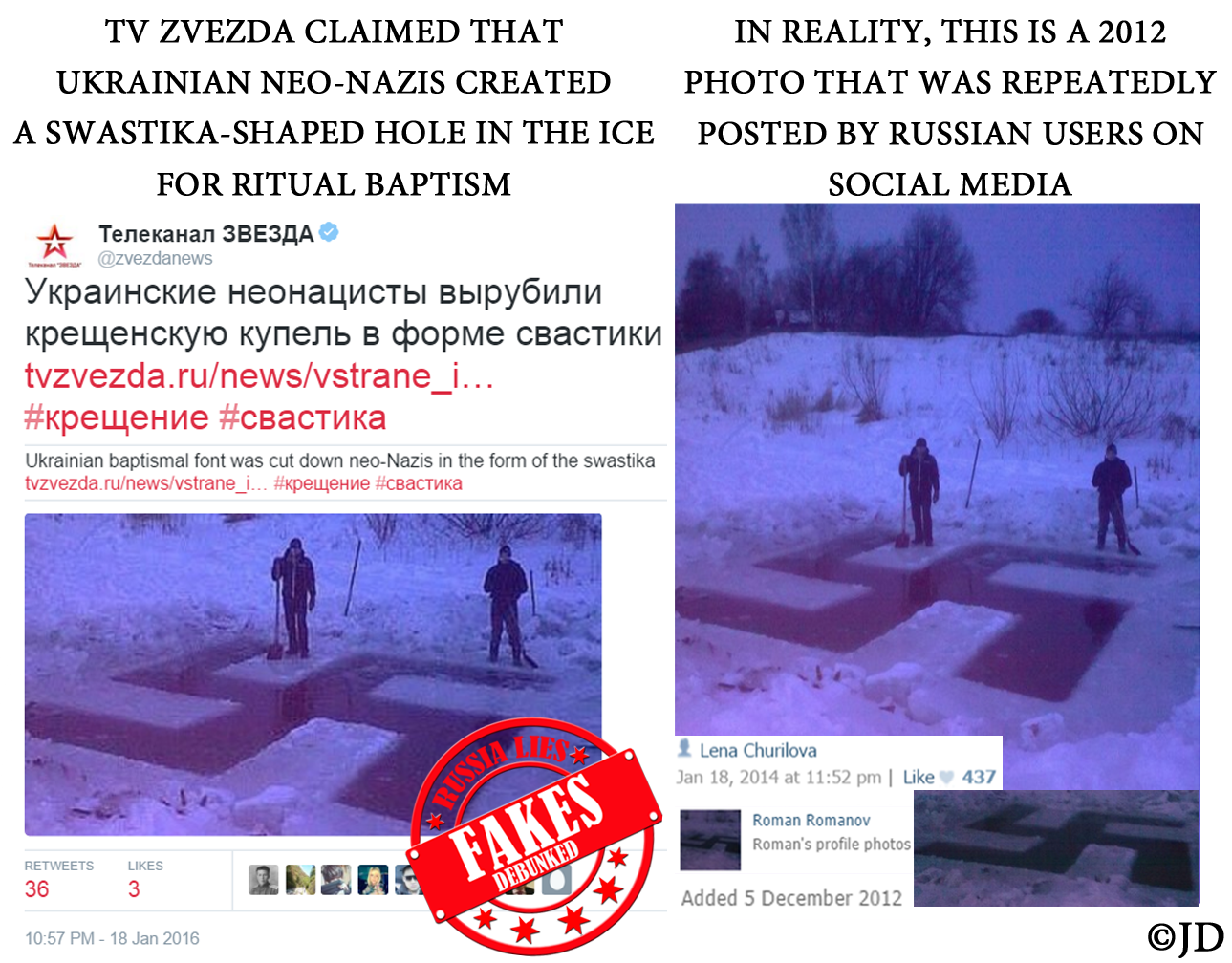 Zvezda claimed that “Ukrainian Neo-Nazis” created a swastika-shaped baptismal ice hole. To corroborate their claims, Zvezda used a 2012 photo from Russia in one of its many incarnations. After this fake was exposed, Zvezda deleted their Tweet and the article itself. 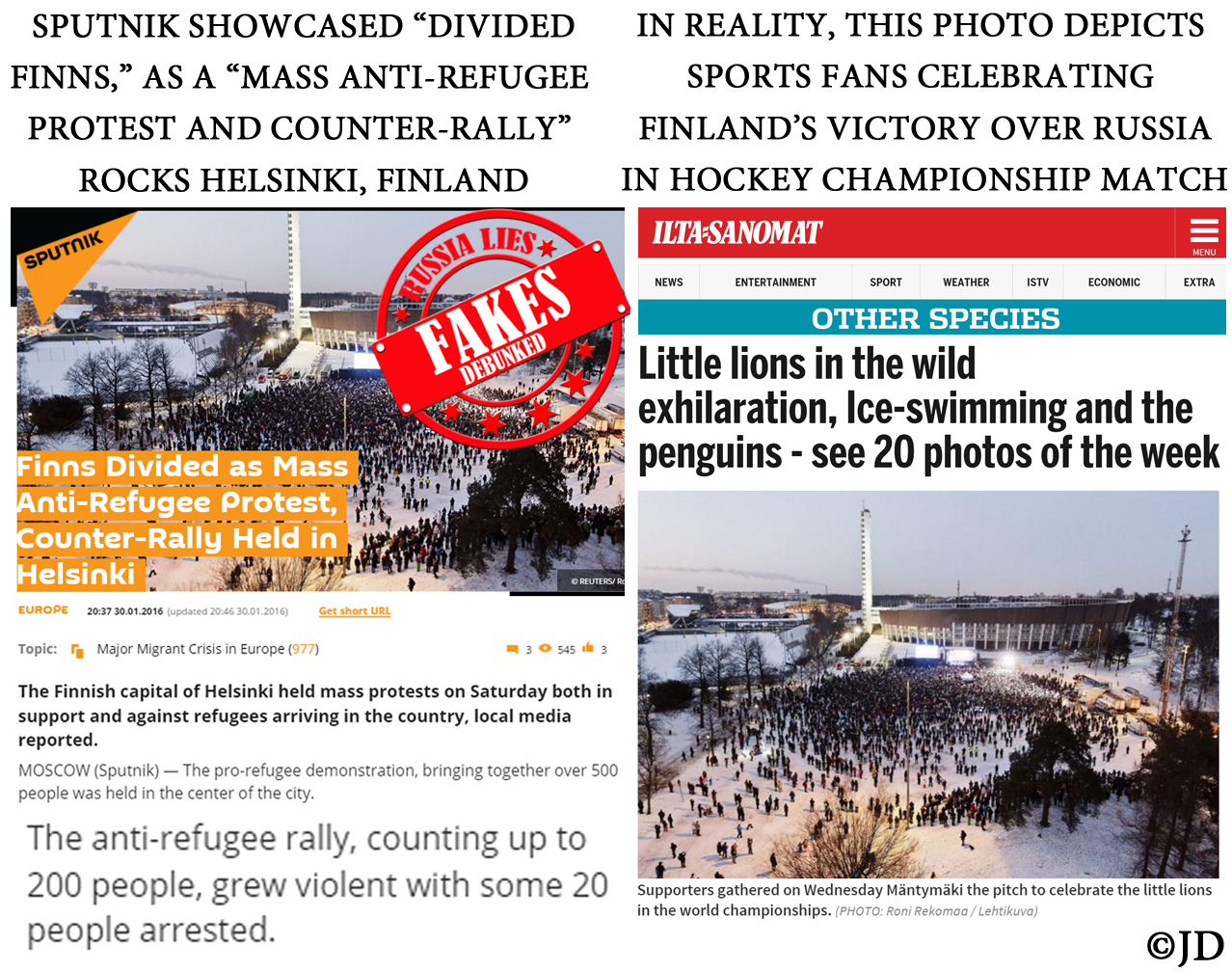 Russian media has been eagerly stoking anti-refugee sentiments in Europe. While reporting on a refugee-related protest in Finland, Sputnik was apparently not impressed by the small number of participants. Thus, Sputnik’s article featured an unrelated photo of a large crowd in Helsinki.

The photograph inappropriately used by Sputnik depicted fans arriving for the gold medal celebration of the junior ice hockey team, next to the Olympic Stadium in Helsinki. After this fake was exposed by Twitter user Verkkomeedio and RussiaLies.com, Sputnik replaced the photo associated with this article and deleted their original Tweet. 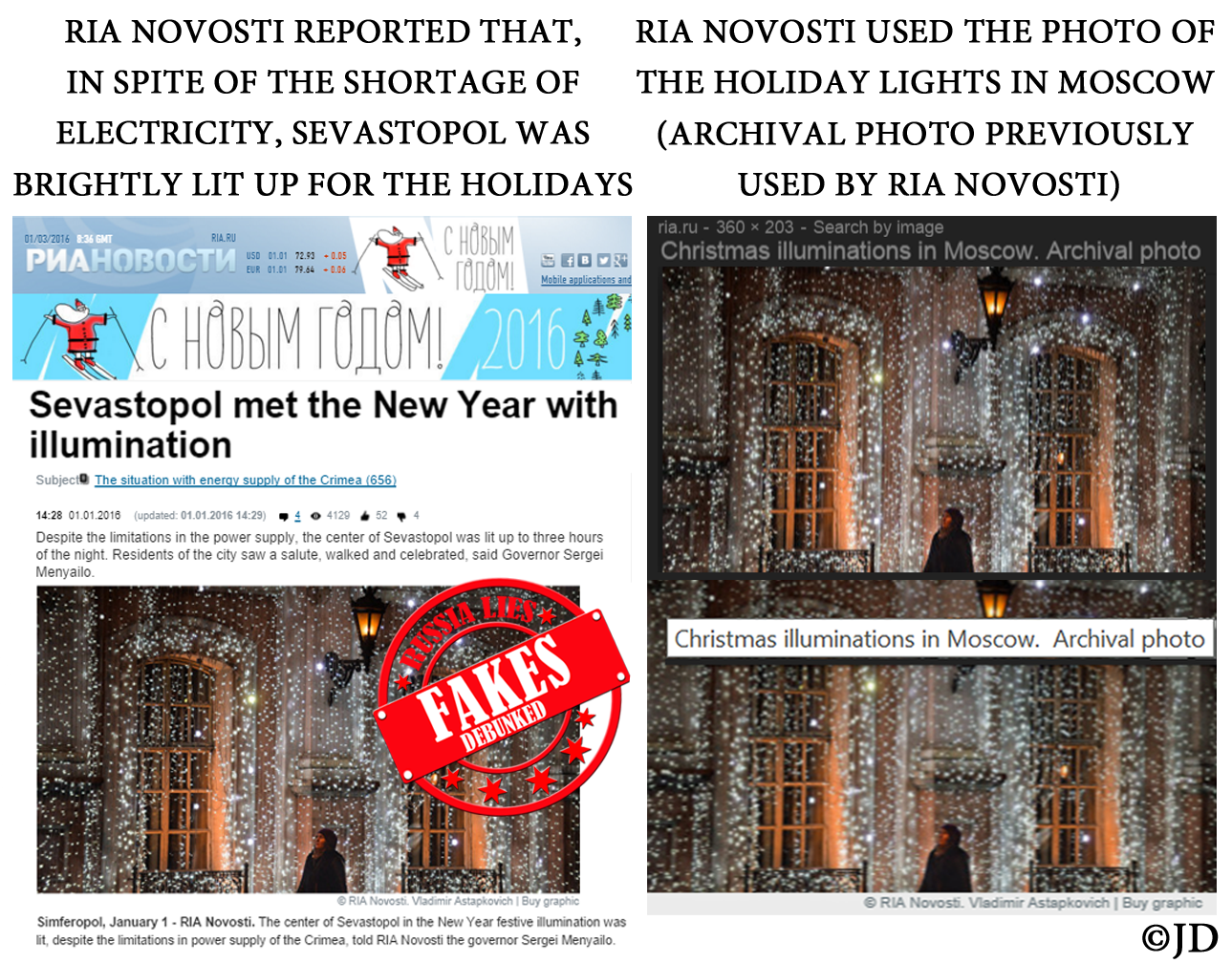 In reality, this photo depicted holiday lights in Moscow – not in the occupied Crimea. RIA Novosti was well aware of this fact, having previously used the same image with a correct description. 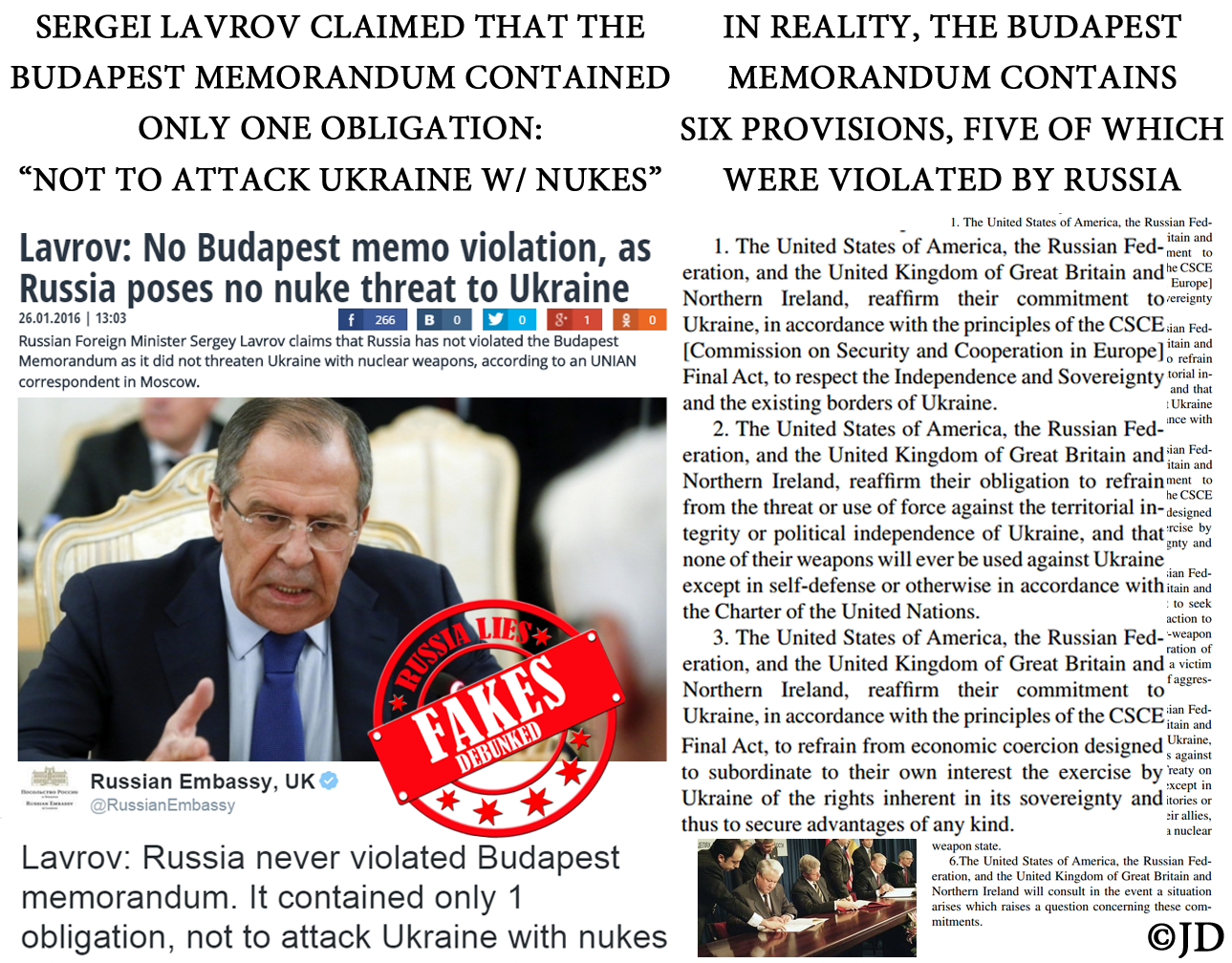 Russia’s Foreign Minister Sergei Lavrov falsely claimed that the Budapest Memorandum contained only one provision: not to use nuclear weapons against Ukraine.

In reality, the Budapest Memorandum contained six provisions and Russia already violated five of them. 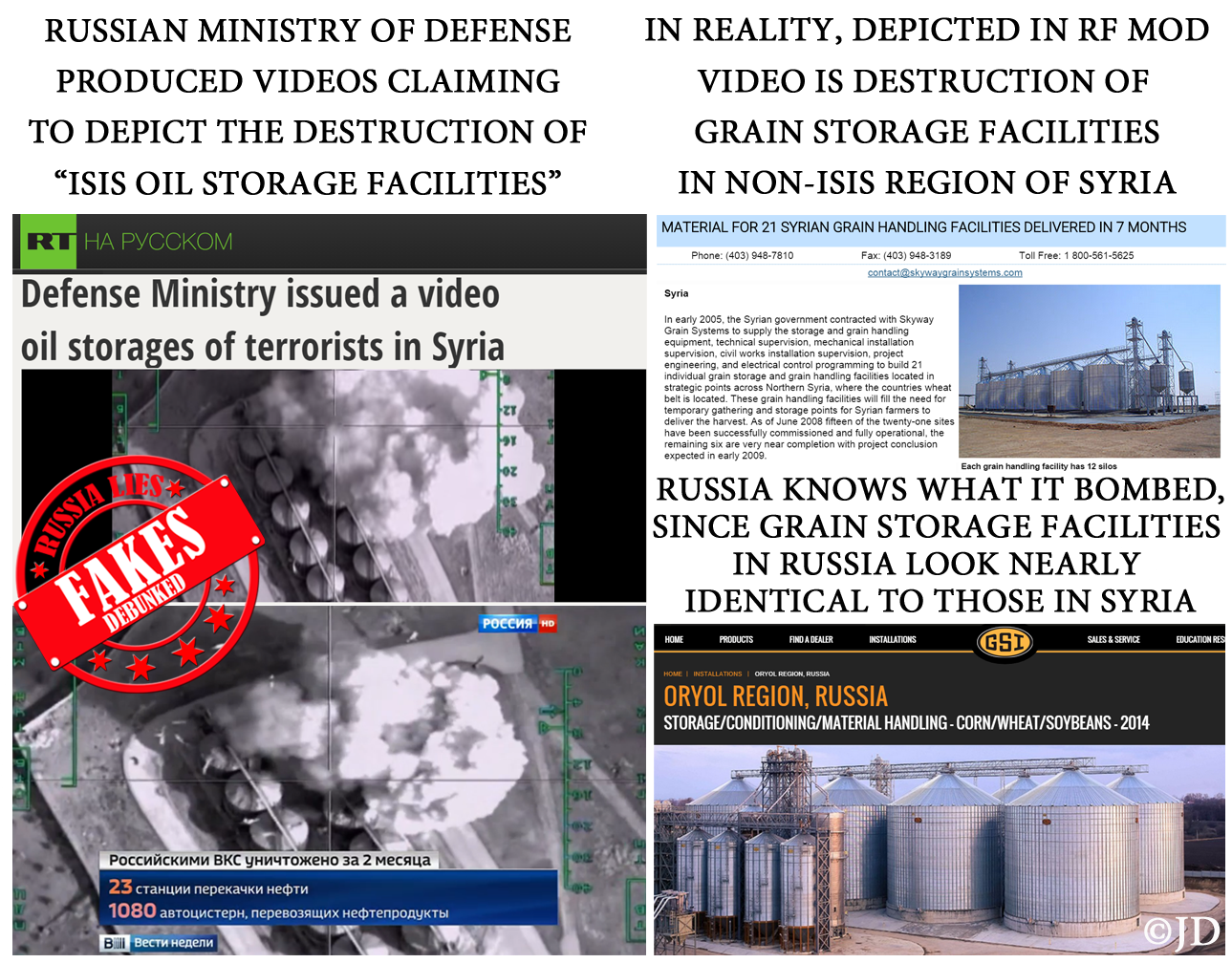 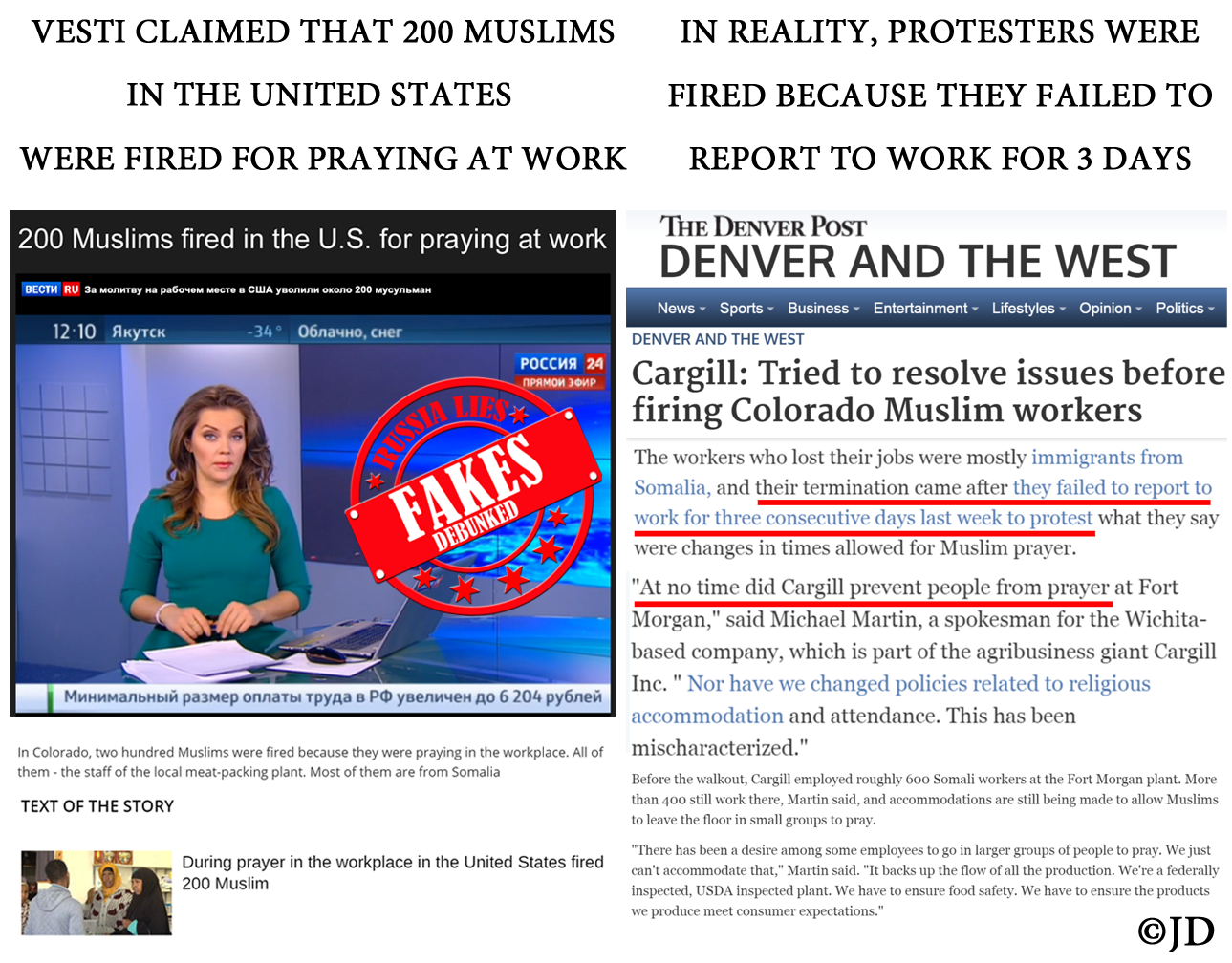 Doing its best to stoke religious tensions in the West, Vesti reported that 200 Muslims in the U.S. were fired solely for praying at work.

In reality, workers were never prevented from praying, but wanted to pray in larger groups (which could not be accommodated at the meatpacking plant due to production safety standards). They were fired not for praying, but for failing to show up to work for 3 consecutive days. 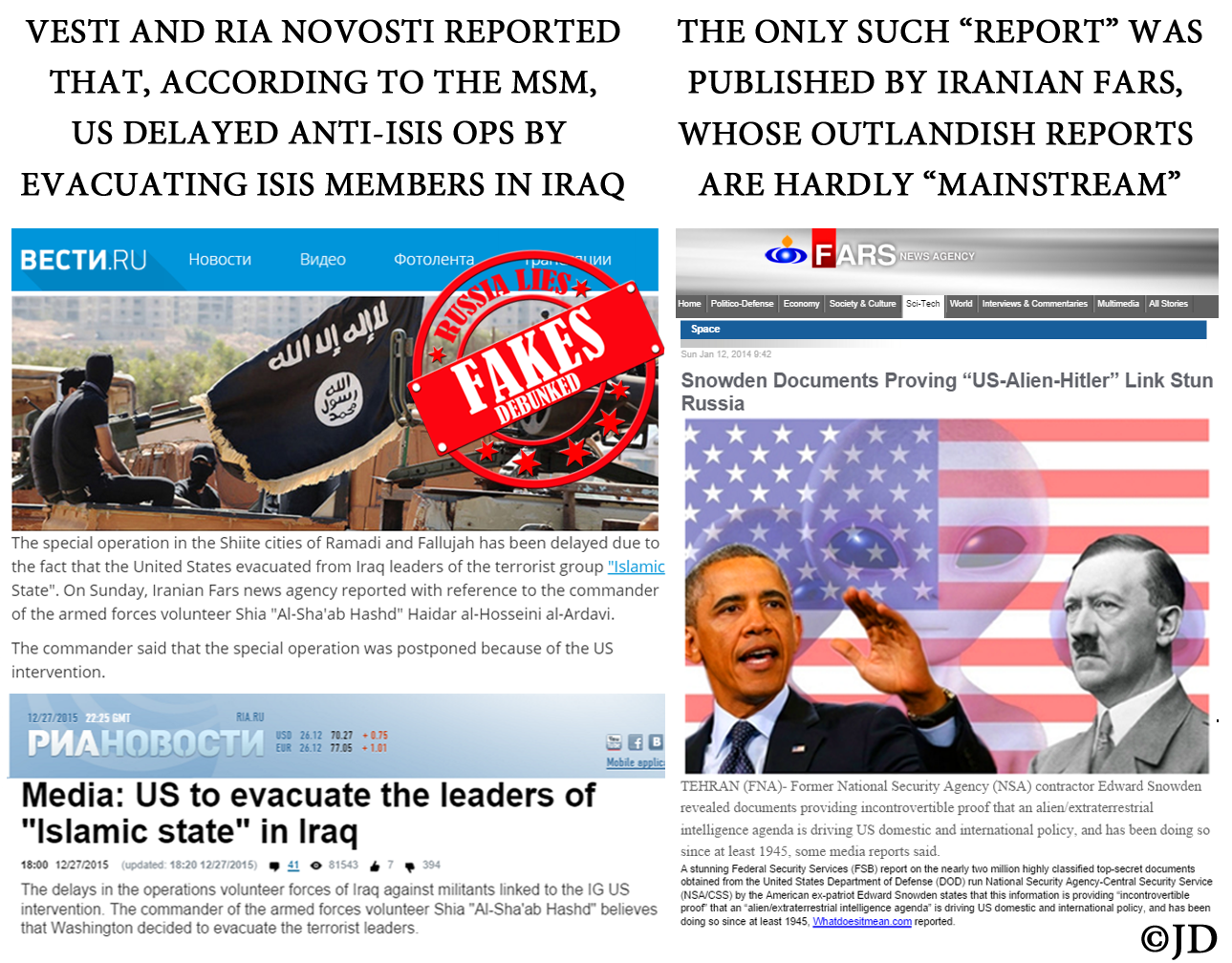 FARS is hardly mainstream and its “reports” simply cannot be taken seriously. 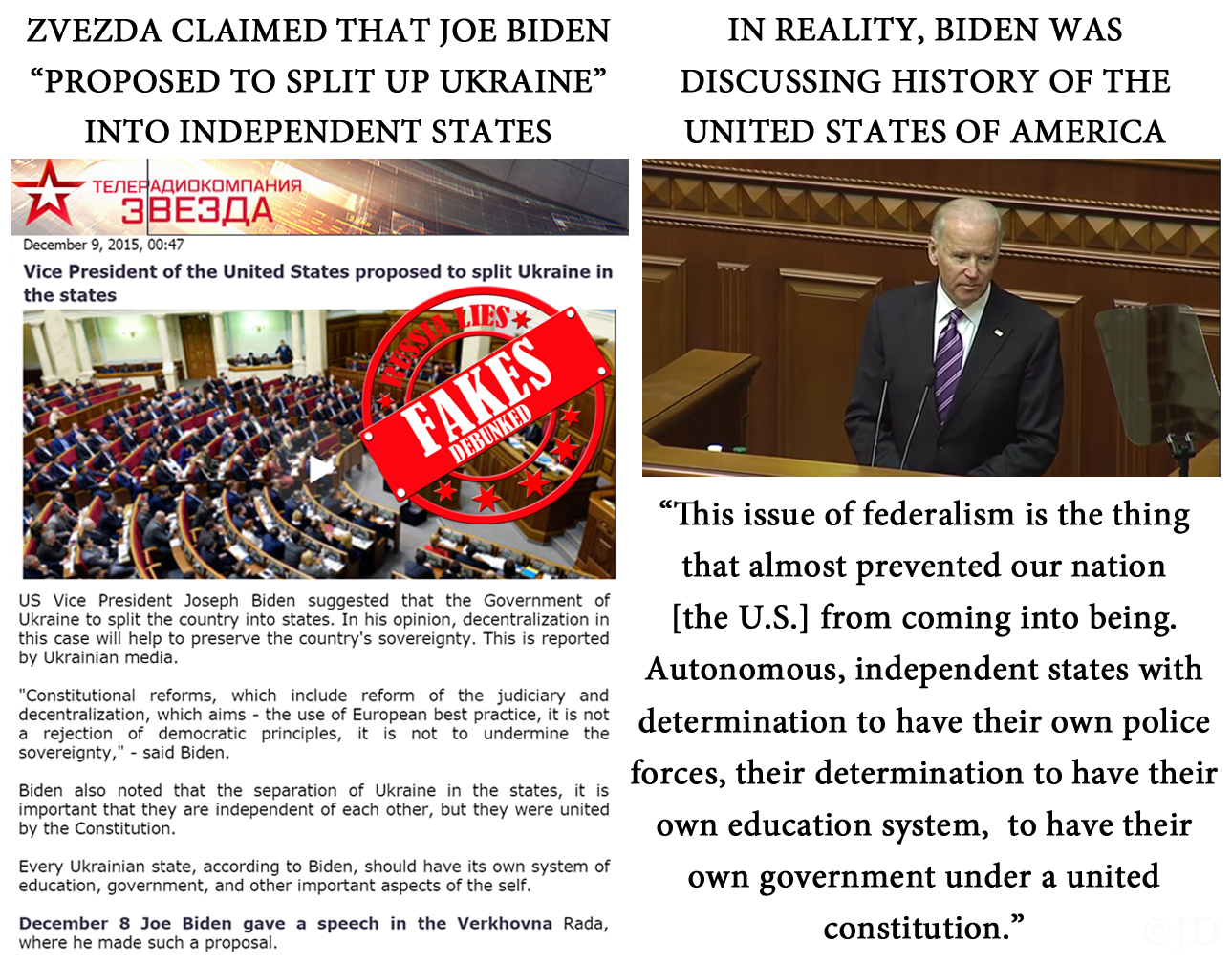 TV Zvezda claimed that Joe Biden proposed to break up Ukraine into a number of independent states. 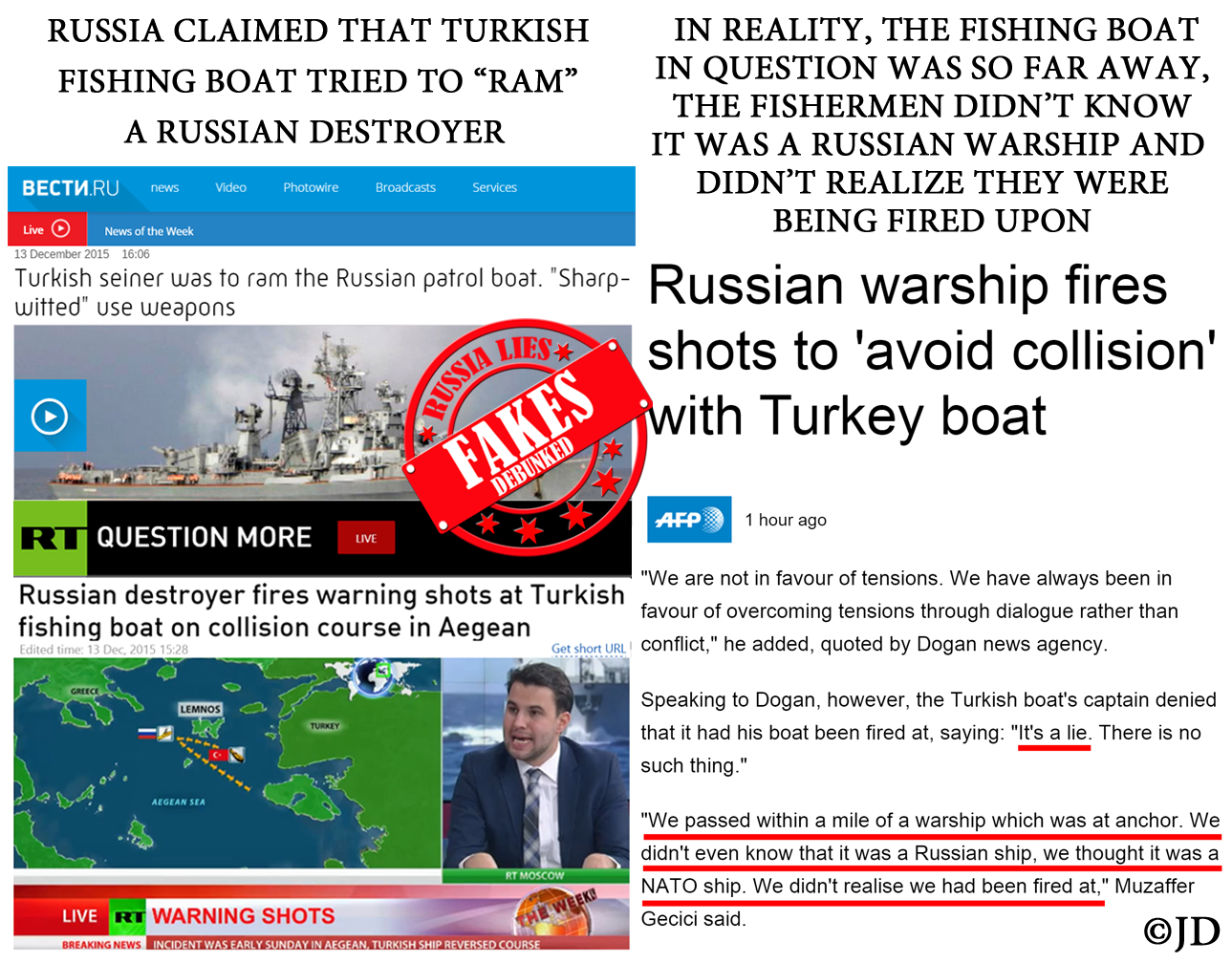 In reality, the fishermen didn’t even know it was a Russian warship and were so far away, they didn’t realize they were being fired upon. 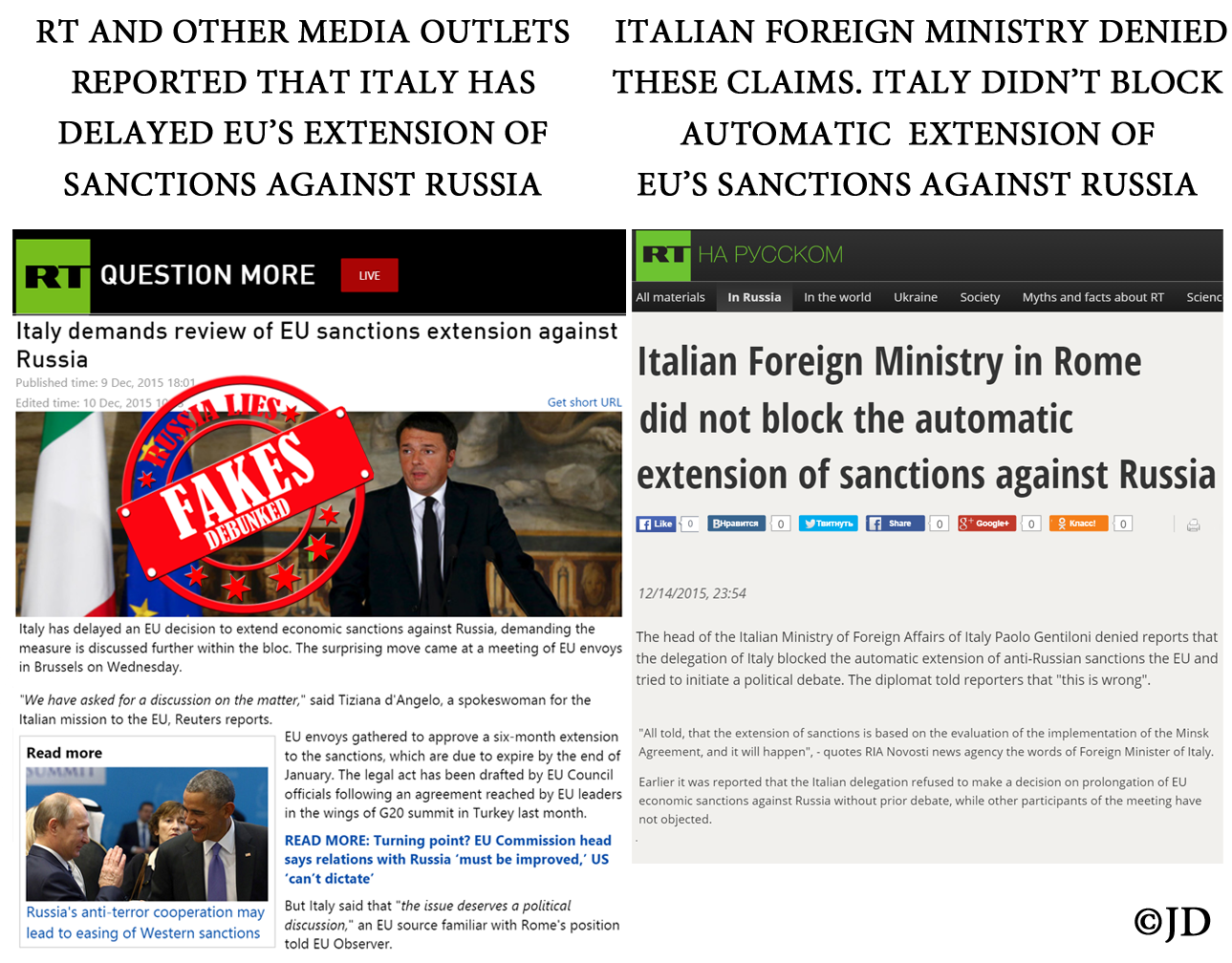 RT claimed that Italy blocked the extension of sanctions against Russia. In reality, this claim was baseless and was refuted by Italian officials.

RT later had to acknowledge that Italy did not attempt to block the extension of sanctions. 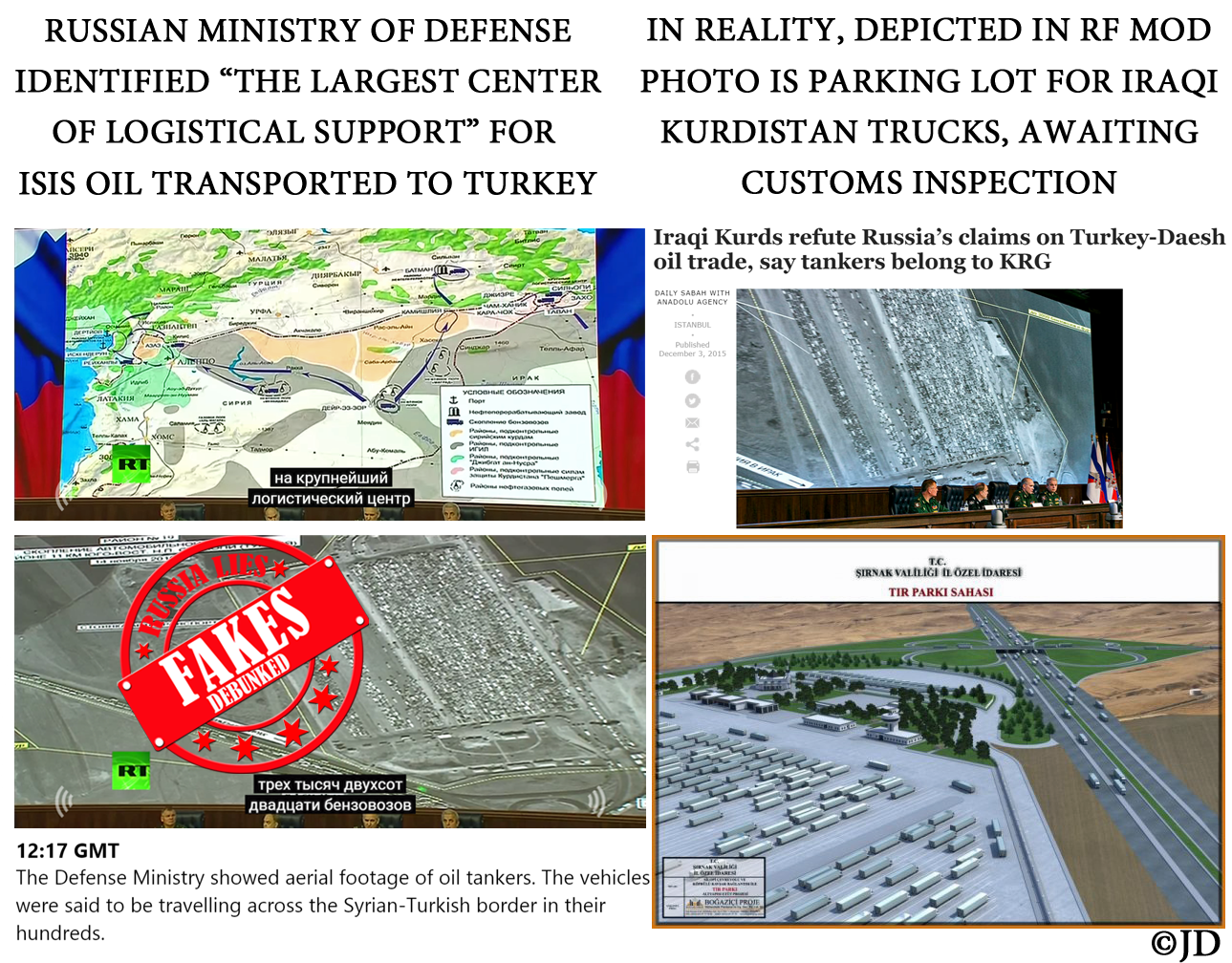 In reality, this is a parking lot for Iraqi Kurdistan trucks awaiting customs inspection. 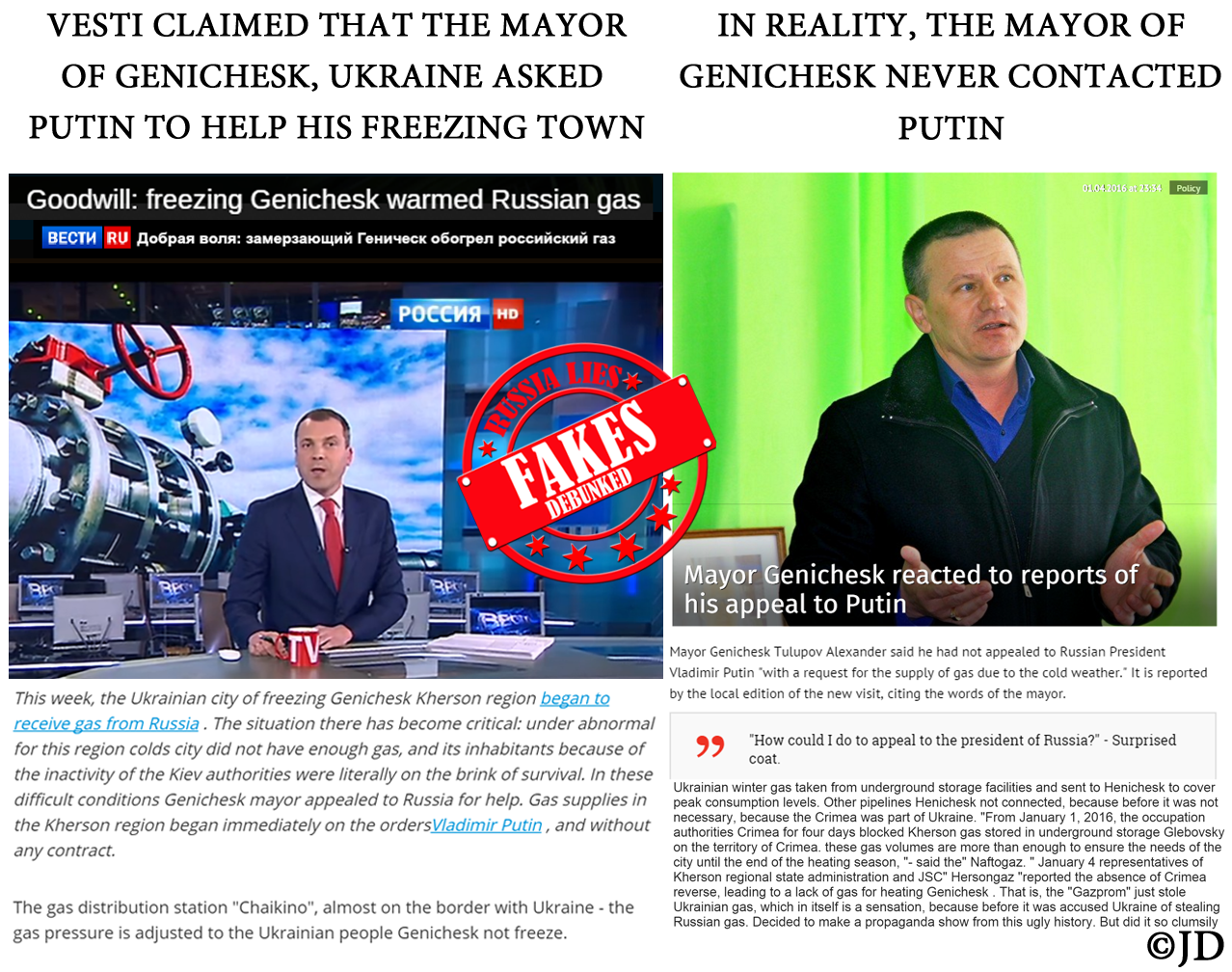 Little town of Genichesk, Ukraine recently experienced severe gas shortages. This was caused by the longstanding arrangement to store the excess gas (produced during summer months) in the occupied Crimea. In January 2016, the authorities in occupied Crimea blocked stored Ukrainian gas from being reverse-distributed to Genichesk. When Ukrainian authorities reported the absence of Crimea reverse gas supply, Russian media saw yet another opportunity for propaganda.

Russia’s state-owned Vesti and numerous other media outlets falsely claimed that the Mayor of Genichesk appealed directly to Vladimir Putin. They alleged that in response to this urgent plea, Russian gas was immediately provided to save freezing Genichesk. In reality, Ukrainian gas stored in occupied Crimea was finally reversed (as it should have been to begin with). The Mayor of Genichesk never reached out to Putin and communicated about this situation only with Ukrainian authorities. 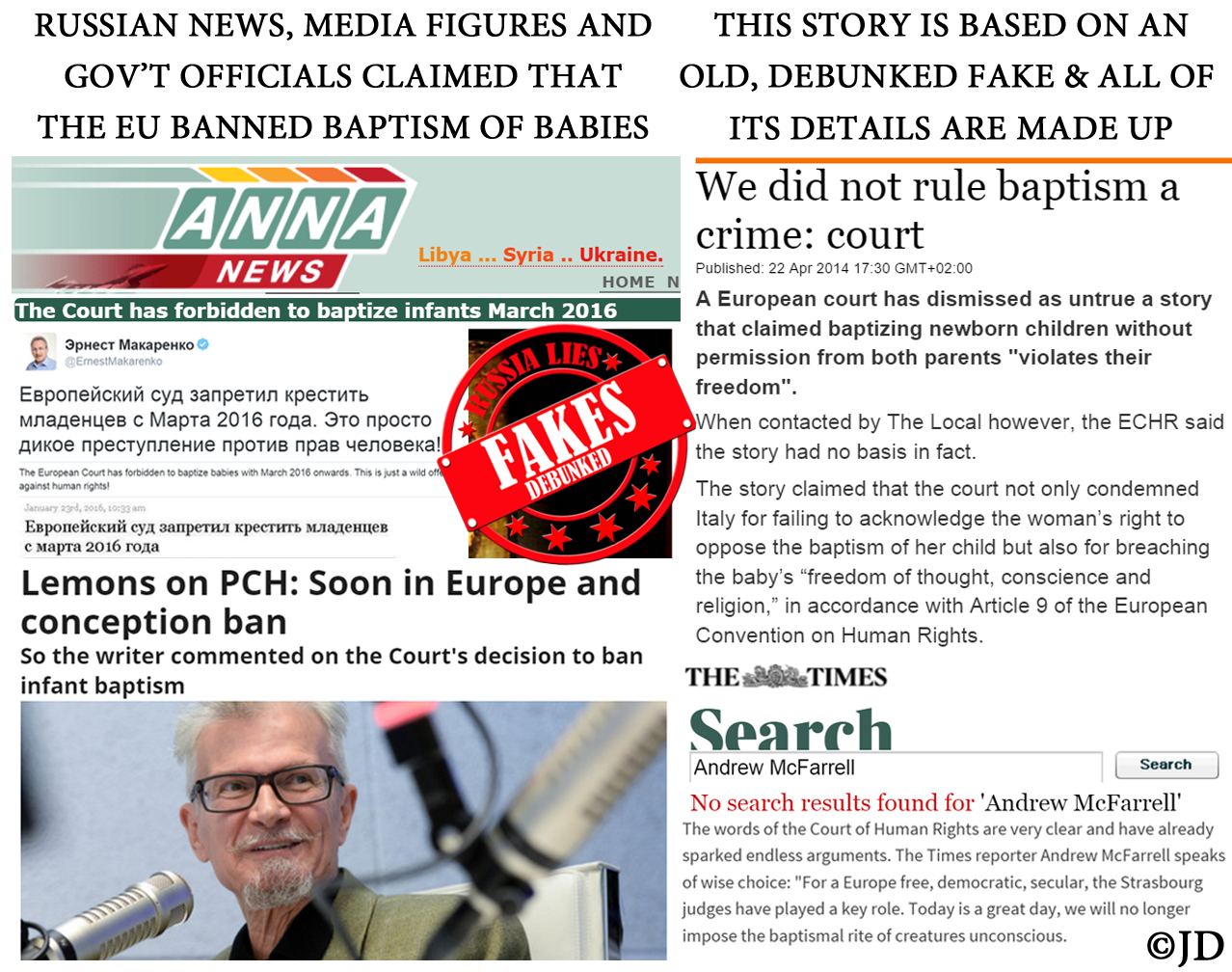 Russian media, public figures and government officials exploded with outrage over an alleged decision of a European court, prohibiting baptism of newborn babies.

In reality, this is a fabrication, based on a long-debunked false claim. European court did not enter any such ruling. The journalist named in false reports (Andrew McFarrell) does not write for The Times and quite possibly does not exist. 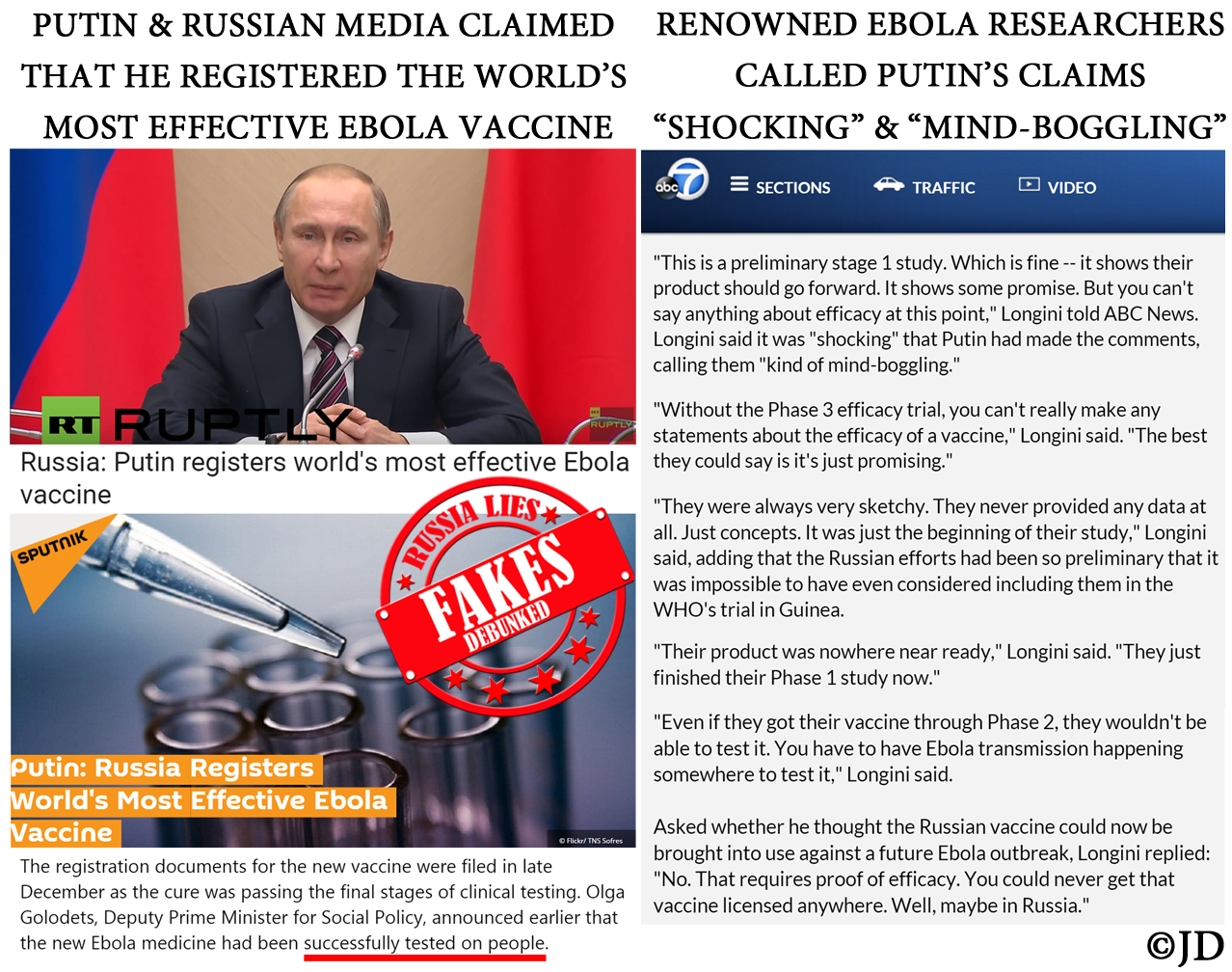 Experts immediately raised doubts about Putin’s assertions. Ira Longini, a professor of infectious diseases at Florida University’s Emerging Pathogens Institute, who helped develop an Ebola vaccine with very high success rate in clinical trials and which is the only vaccine to have passed the highest stage of testing, called the claims nonsensical. Longini found Putin’s statements “shocking” and “kind of mind-boggling.” He said: “Even if they got their vaccine through Phase 2, they wouldn’t be able to test it. You have to have Ebola transmission happening somewhere to test it… You could never get that vaccine licensed anywhere. Well, maybe in Russia.” 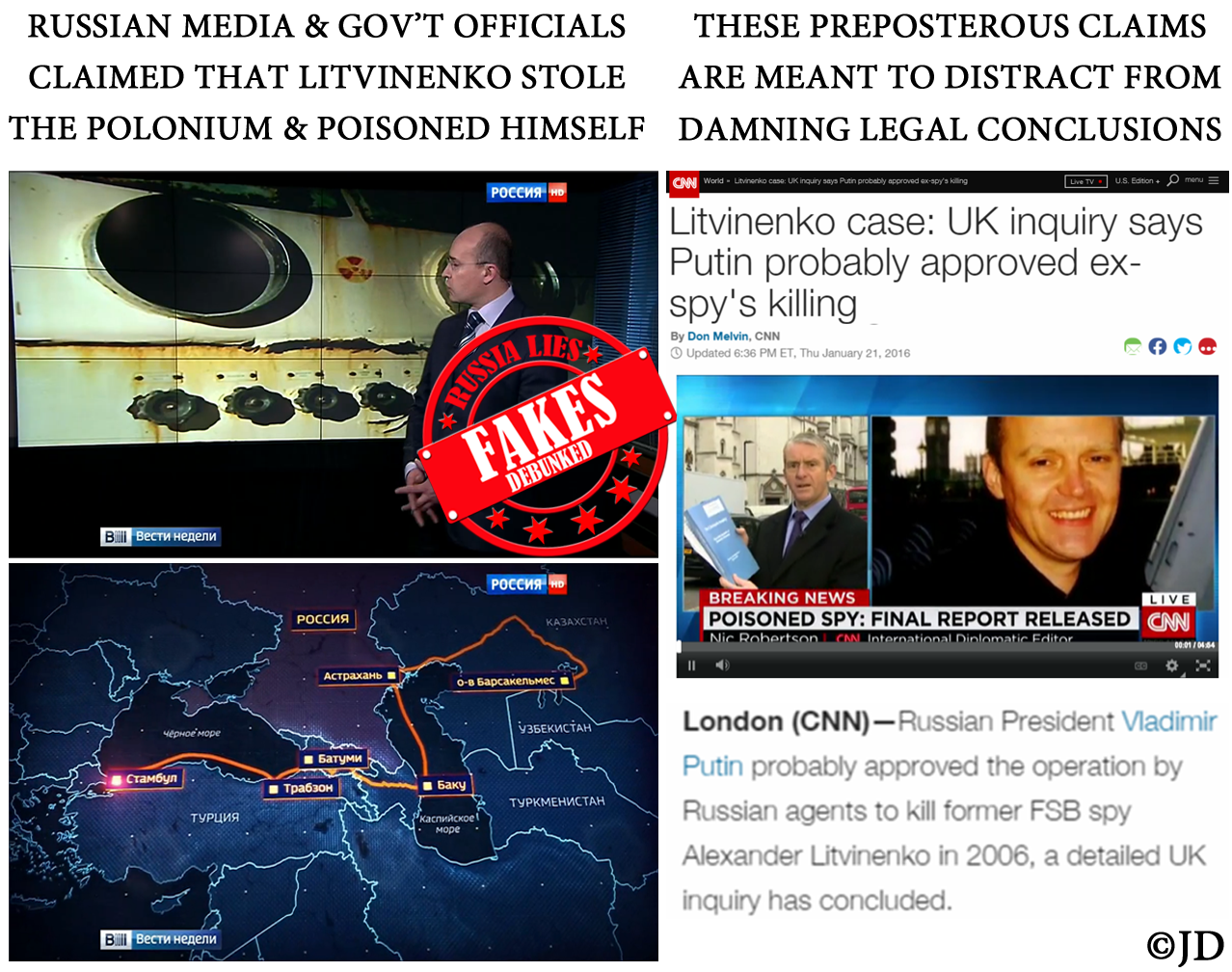 In response, Russian media exploded with a number of conspiracy theories: claiming that polonium was planted to frame Russia, alleging that polonium can be cheaply and easily produced anywhere in the world (and didn’t originate in Russia), accusing the MI6 of killing Litvinenko and, most outrageously, claiming that Litvinenko (along with the CIA and the MI6) stole the polonium from Russia, transported it through Turkey and then poisoned himself.

All of these preposterous conspiracy theories further expose Russia’s desperation to deflect attention from the Kremlin’s undeniable responsibility and Putin’s involvement in sanctioning the assassination of Alexander Litvinenko.

In reality, the Foreign Policy’s rating was hardly flattering. It mentioned Putin “playing peacemaker while dropping bombs” in order to force his way into a position of bigger influence in global affairs.

Russian media gleefully reported that Leonardo DiCaprio was confirmed as a lead actor set to play Putin in an upcoming feature film. These claims were echoed across multiple publications and Internet media outlets.

DiCaprio’s affiliates promptly debunked these claims, describing them to be “completely false.” The actor is not attached to the project in question. 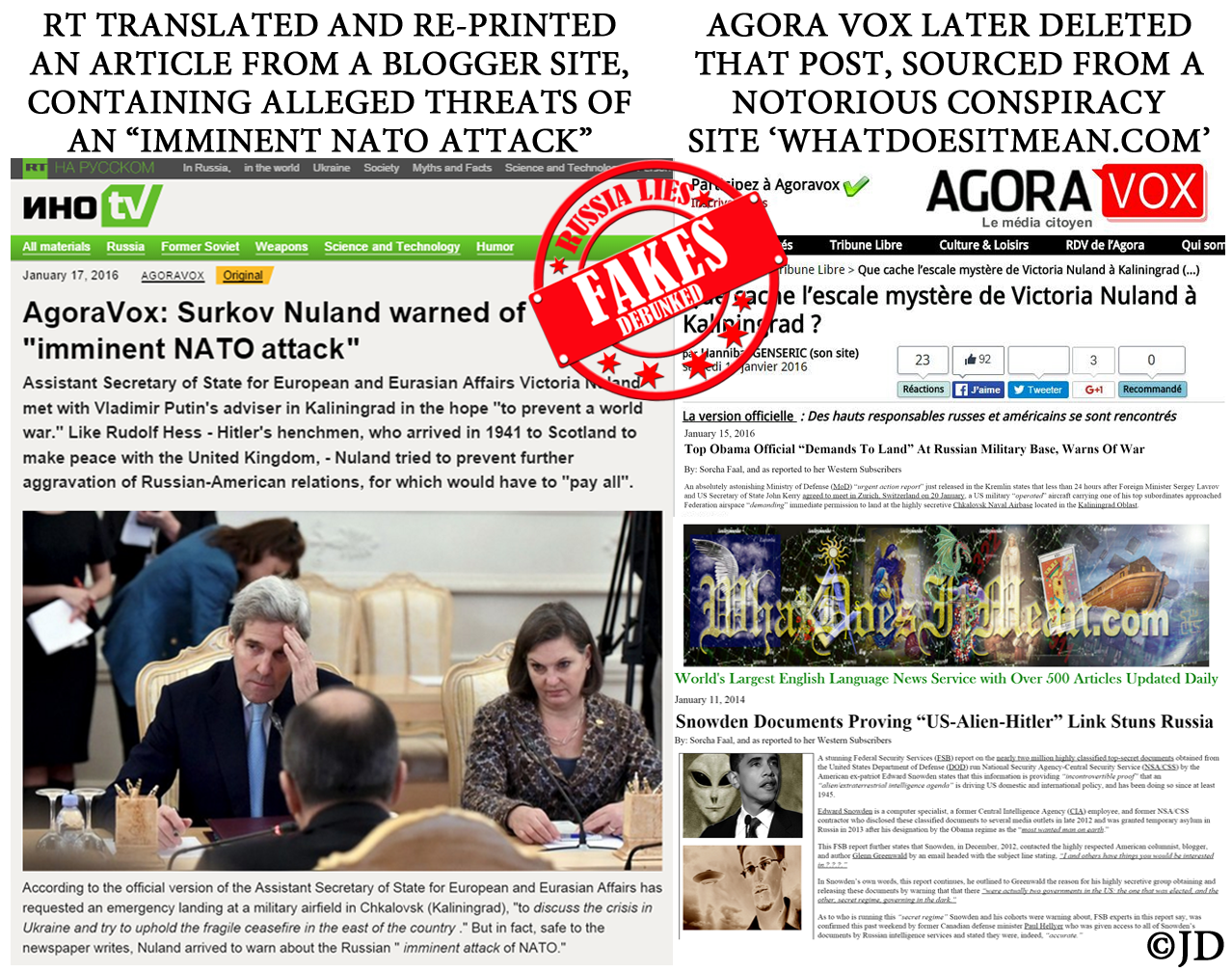 RT translated and reprinted asinine claims that Assistant U.S. Secretary of State Victoria Nuland hurried to Russia to warn Kremlin aide Vladislav Surkov that “NATO attack against Russia is imminent.” RT found these allegations on a blog website, Agora Vox, which later deleted the posting. The “article” in question originated on a notorious conspiracy website, WhatDoesItMean.com. It regularly publishes outlandish and ridiculous fabrications.

In reality, Nuland and Surkov met to discuss the situation in Eastern Ukraine and the implementation of Minsk agreements.

Read the next installment here: http://www.russialies.com/russias-top-240-lies-international-edition/