Every objective Russia-watcher knows that Russia lies – frequently, shamelessly, with abandon. Previous collections of debunked Russian fakes have documented numerous examples of willful, methodic manipulation of public opinion across the globe in a way that suits the Kremlin’s geopolitical agenda. Recent U.S. elections have demonstrated that many Americans are not yet familiar with the extent of Russian propaganda, or the lengths to which Putin’s mouthpieces will go to achieve their nefarious goals. At the same time, Russian media is very fond of propaganda tactics known as “whataboutism” and “gaslighting,” constantly blaming opponents for engaging in the very acts Russia is accused of.

Thus, the Kremlin eagerly hopped aboard the #fakenews train – disingenuously accusing Western media of disseminating untrue news stories. The “fake” stamp used by Russia’s Ministry of Foreign affairs for its compilation is curiously similar to the image used by RussiaLies.com, but the similarity ends there. Russian MFA’s “debunking” consists of a “fake” stamp and the following statement: “This article puts forward information that does not correspond to reality.” No effort is being made to prove why the articles in question are allegedly “fake.” 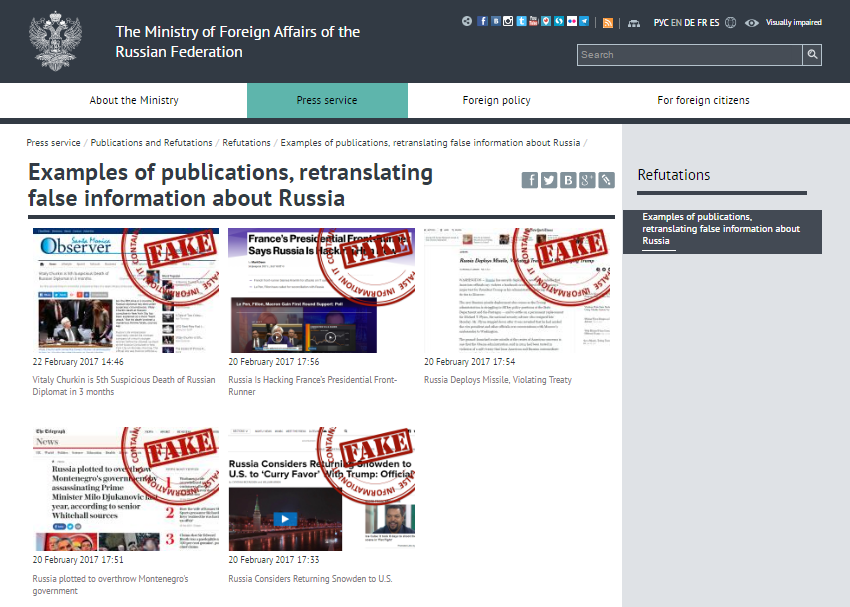 To the contrary, RussiaLies.com strives to demonstrate and corroborate why the highlighted pieces of Russian propaganda are false, manufactured or intentionally distorted. The current compilation explores the most significant, cynical and colorful examples of debunked Russian lies about the world. 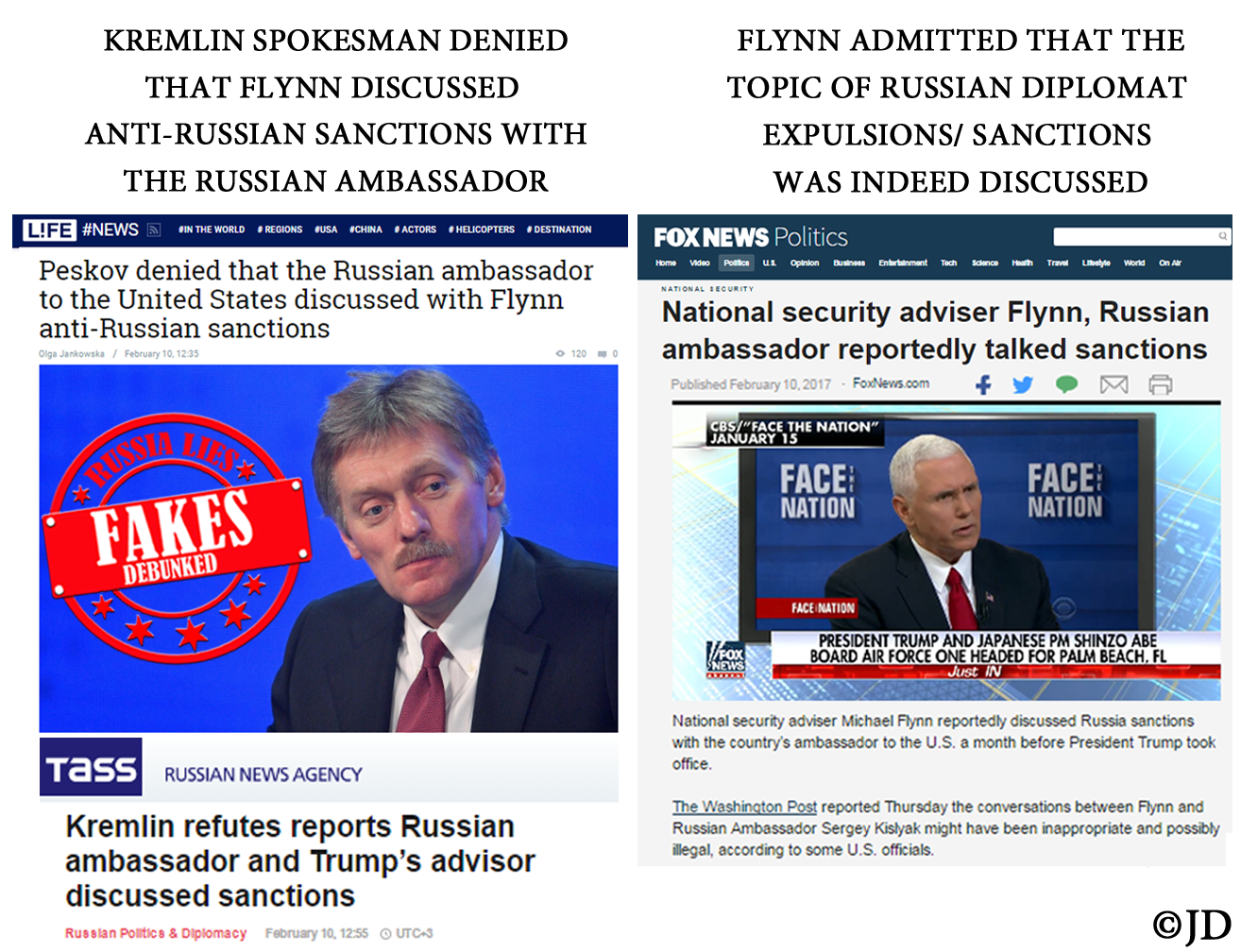 President Trump’s former national security adviser Michael Flynn discussed sanctions with Russian ambassador, urging Russian officials not to overreact. Flynn reportedly hinted that after the election, the Trump administration would revisit and possibly lift the sanctions and related measures put in place against Russia by the Obama administration.

The Kremlin apparently took these suggestions very seriously, as Putin announced his intent not to retaliate. Such a non-response was clearly uncharacteristic or Russia’s typical tit-for-tat reprisals. Trump praised the move, highlighting the likelihood of his foreknowledge about Flynn’s alleged promises to Russian Ambassador Sergey Kislyak.

When the Kremlin spokesman claimed that Flynn and Kislyak did not discuss sanctions, he knew or should have known that this statement was blatantly false. 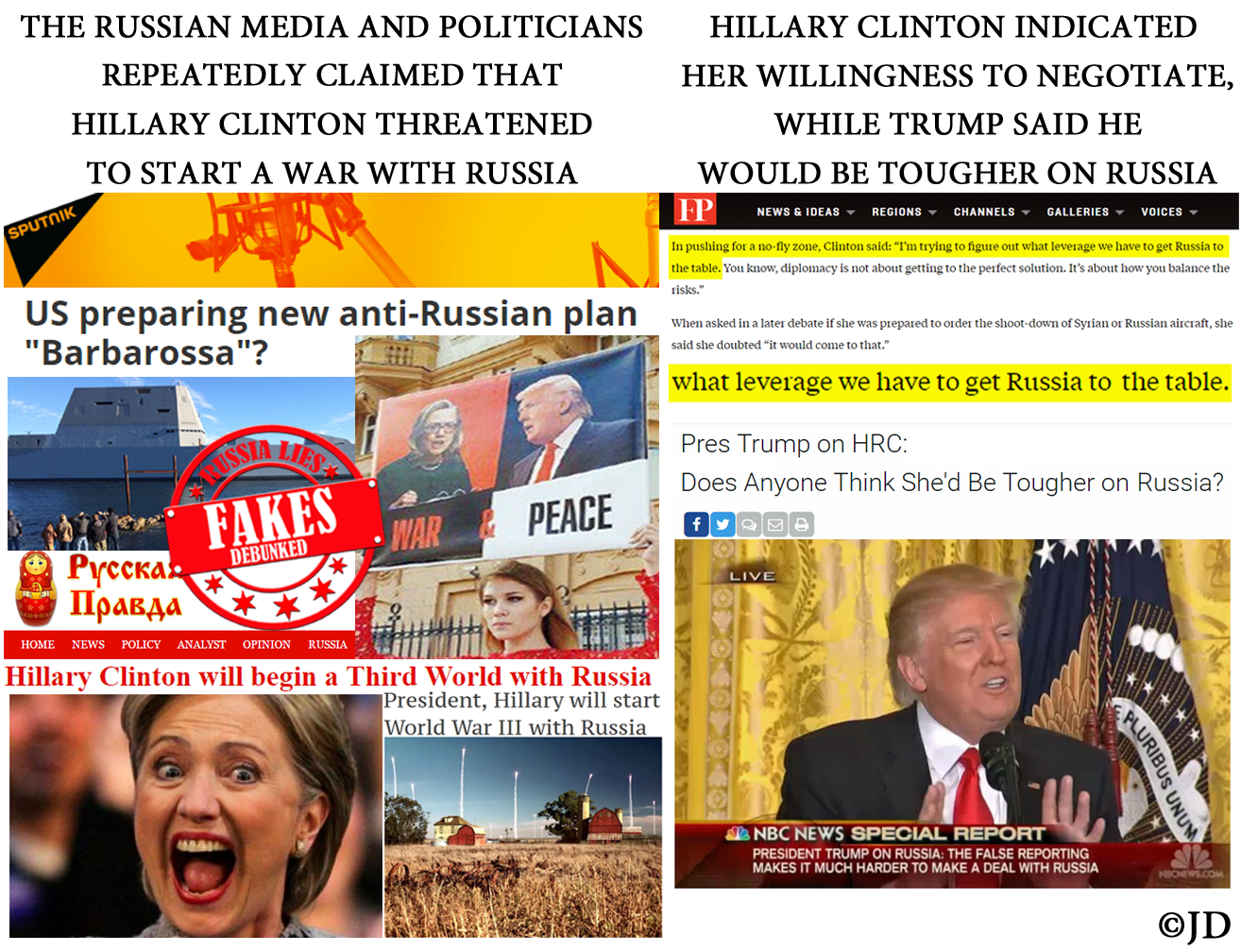 The most prevalent theme in Russia’s slew of anti-Hillary propaganda was the allegation that, if elected, Hillary Clinton would immediately start WWIII against Russia. Sputnik published a piece, pondering whether the U.S. already has in place a plan for “Operation Barbarossa” and a notorious Russian lawmaker Vladimir Zhirinovsky claimed that Hillary Clinton threatened to start a war with Russia as soon as she is in office. Russian media coverage continuously aligned the prospect of Hillary’s election with unavoidable war against Russia. Examples of such articles are too numerous to mention, a few examples can be found here: 1, 2, 3, 4, 5, 6, 7, 8, 9.

Even if the Russians truly found any of Hillary Clinton’s statements about Russia alarming, they could not quote a single utterance that would corroborate the unavoidable certainty of WWIII in the event she was elected. Clinton neither promised to start a war with Russia, nor was there any reason to believe that the U.S. is planning a military offensive.

The suggestion of creating a no-fly zone in Syria was most frequently cited as the indicator that Hillary was willing to start a war with Russia. However, her statement suggested prompting Russia to negotiate a solution.

It is noteworthy that Trump himself adopted Russia’s anti-Clinton slogan, repeatedly claiming that her victory would have meant WWIII/nuclear holocaust. At the same time, Trump asserted that he would be “tougher on Russia” than Clinton. This did not diminish Russian enthusiasm for supporting his candidacy. The Russian government and the media (as one of its arms) simply found a mantra that would render the possibility of Clinton’s election unconscionable. The Kremlin’s preference for Trump was barely disguised and oftentimes, overt. 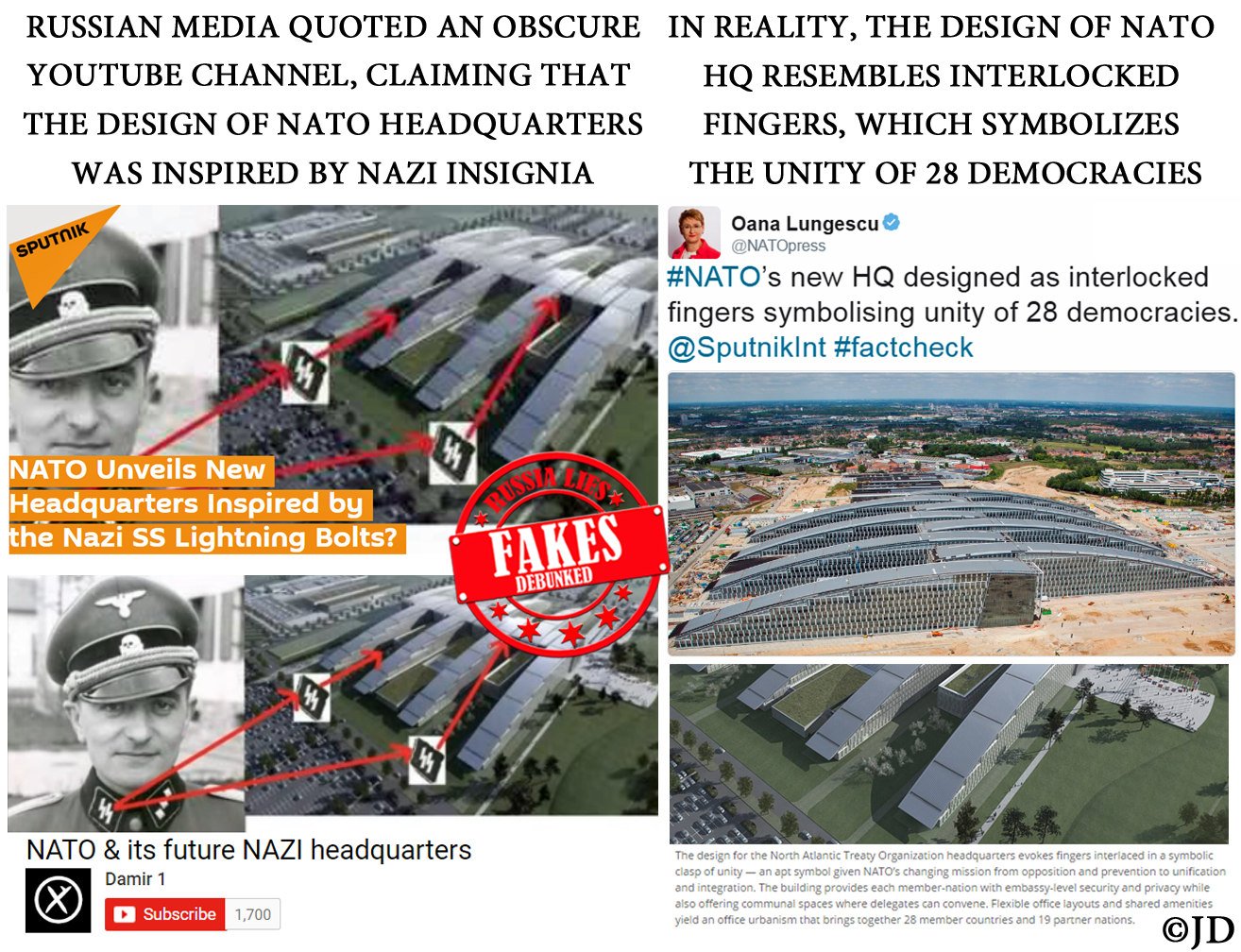 In line with Russia’s anti-NATO propaganda rhetoric, Sputnik publicized a theory that the design of NATO’s new headquarters was inspired by “the Nazi SS Lightning Bolts.” Sputnik found the design “ disconcerting in the wake of the military coalition’s major buildup along the Russian border, led by German troops.” Russia’s propensity to compare the Kremlin’s opponents to Nazis or ISIS is well-documented. By comparing its real or perceived enemies to fascists or terrorists, Russian media attempts to taint them with the same stigma of those indefensible elements. Curiously, Sputnik’s piece was published in 2016, but it was based in its entirety upon an obscure conspiracy theory video from 2014.

RT falsely reported that NATO placed hundreds of U.S. tanks on Russian borders. After this apparent falsehood was pointed out by RussiaLies.com and others, RT amended its headline to state: “100s more US tanks and military hardware arrive in Europe to keep ‘peace and freedom’ at Russian borders. This claim is still inaccurate. In reality, 87 U.S. tanks arrived to Europe, as part of the ‘Atlantic Resolve’ brigade rotation.

In fact, the RT correspondent was on the scene to collect information and RT knew or should have known the realities of the situation. 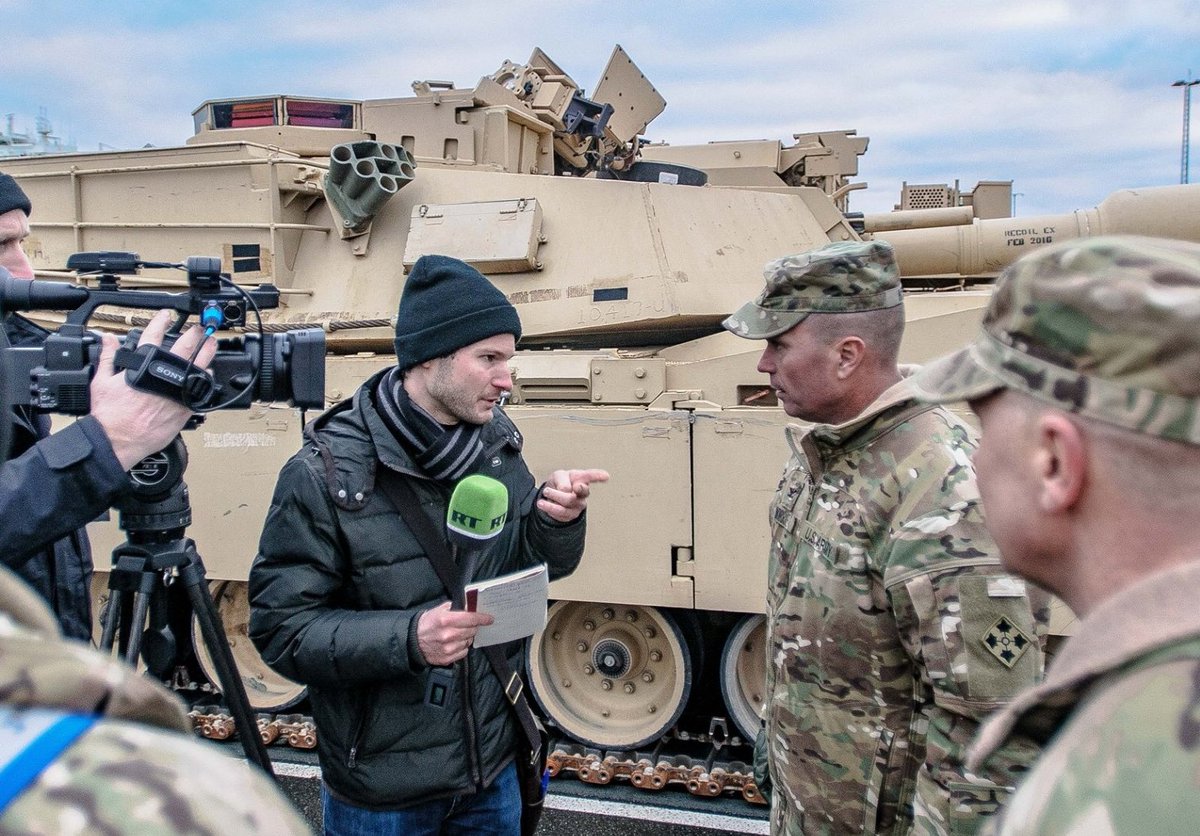 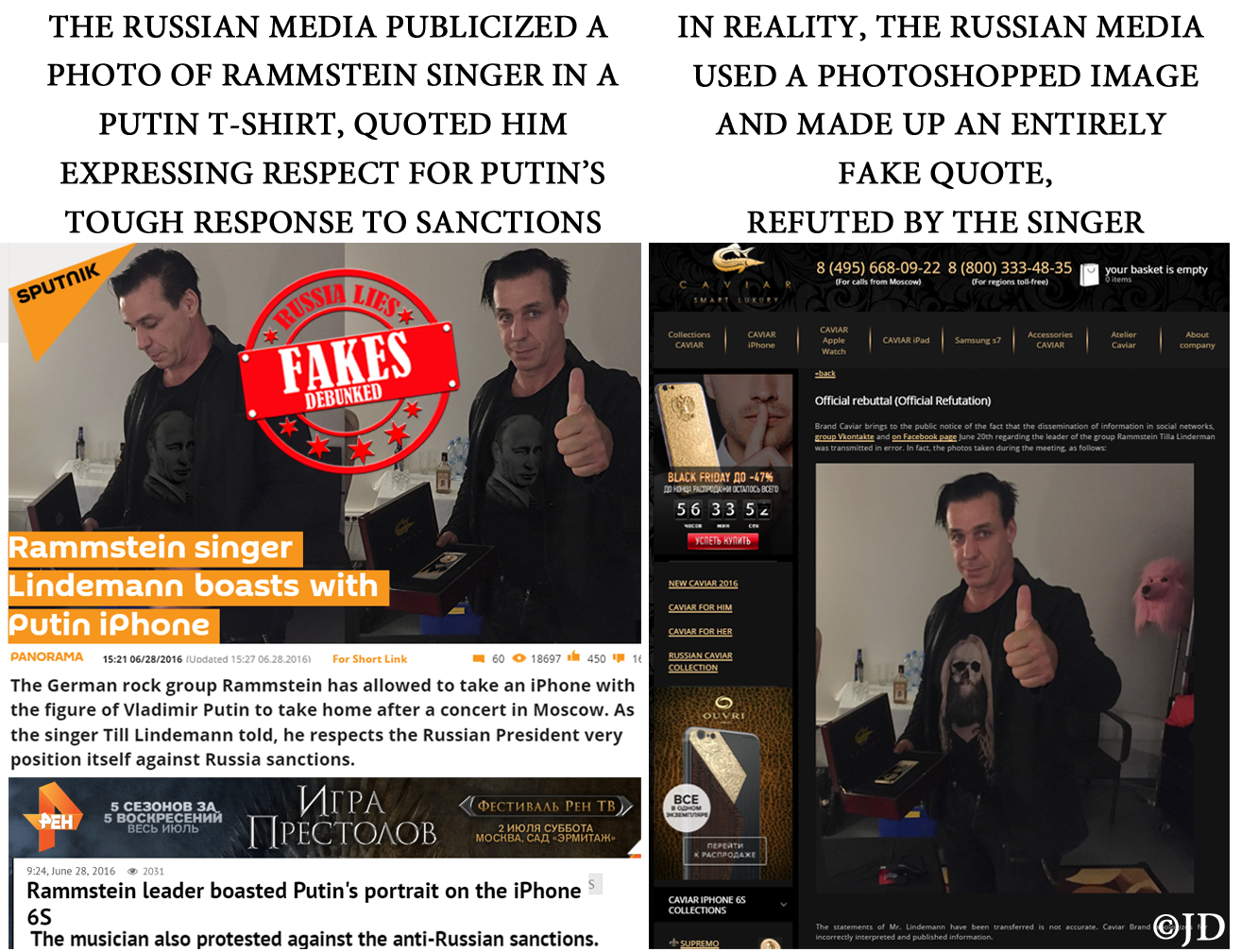 Russia continues to claim that Western sanctions are “not working,” but the topic of sanctions remains very popular with pro-Kremlin propaganda outlets. The Russian media resorts to ridiculous fabrications to assert Western support for the lifting of sanctions. To sway popular opinion, Russian propaganda channels apparently find it beneficial to cite celebrities. Sputnik and other Russian media outlets published a story that quoted Rammstein singer Till Lindemann, allegedly speaking out in support of Putin and lashing out against Western sanctions. According to Sputnik, Lindemann said that Putin is more popular in Germany than Angela Merkel. Sputnik also published a Photoshopped picture of the singer in a Putin T-shirt.

Lindemann denied making any such utterances, stating that as a matter of principle he does not issue any political commentary. 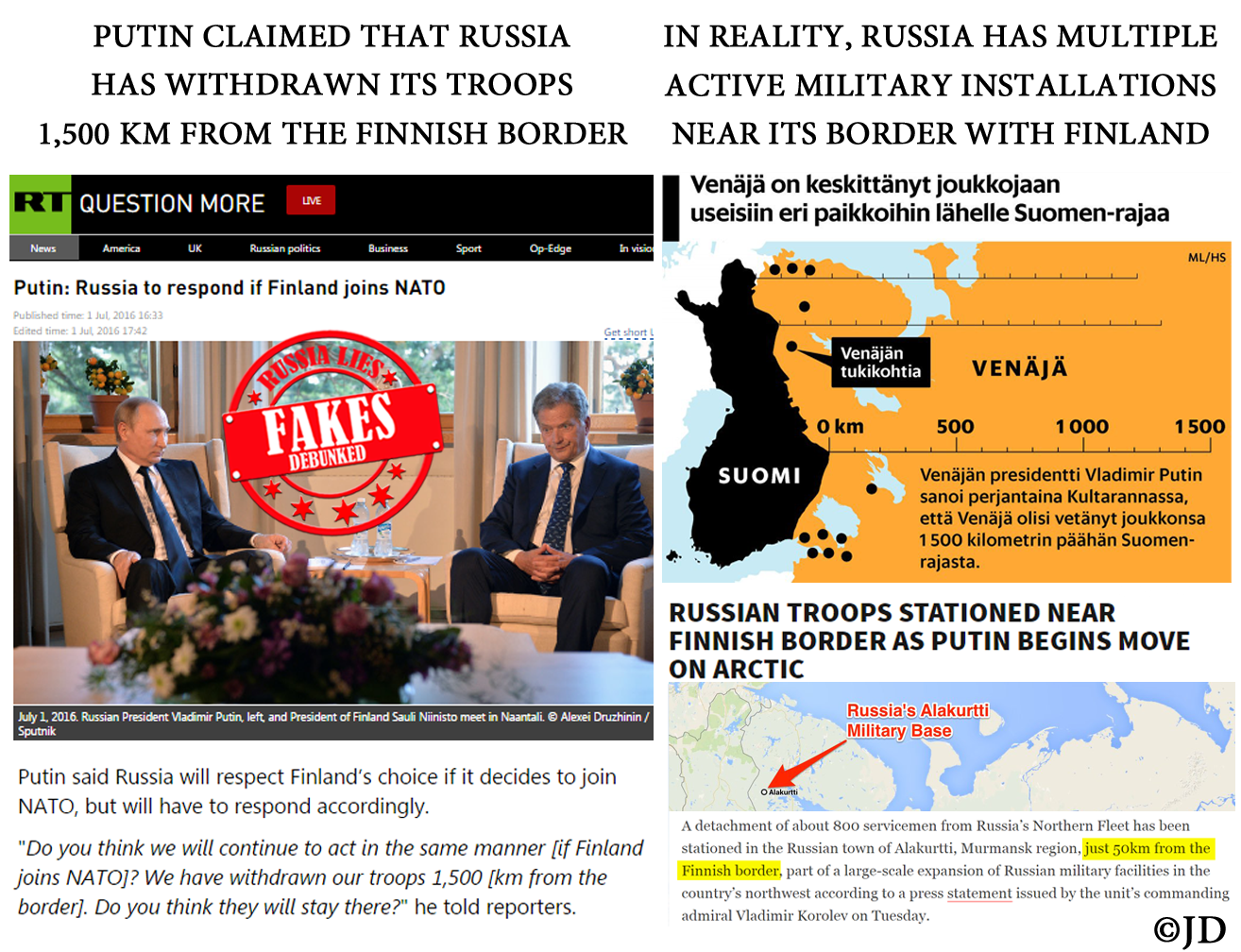 None other than the President of Russia Vladimir Putin ludicrously claimed that Russia has withdrawn its troops 1,500 km from the Finnish border. Finnish President Sauli Niinisto looked on in disbelief, since – contrary to Putin’s assertion – there are multiple Russian military installations near the Finnish border. For example, the military base on the Kola Peninsula in the Russian city of Alakurtti is located less than 60 kilometers from Russia’s border with Finland. 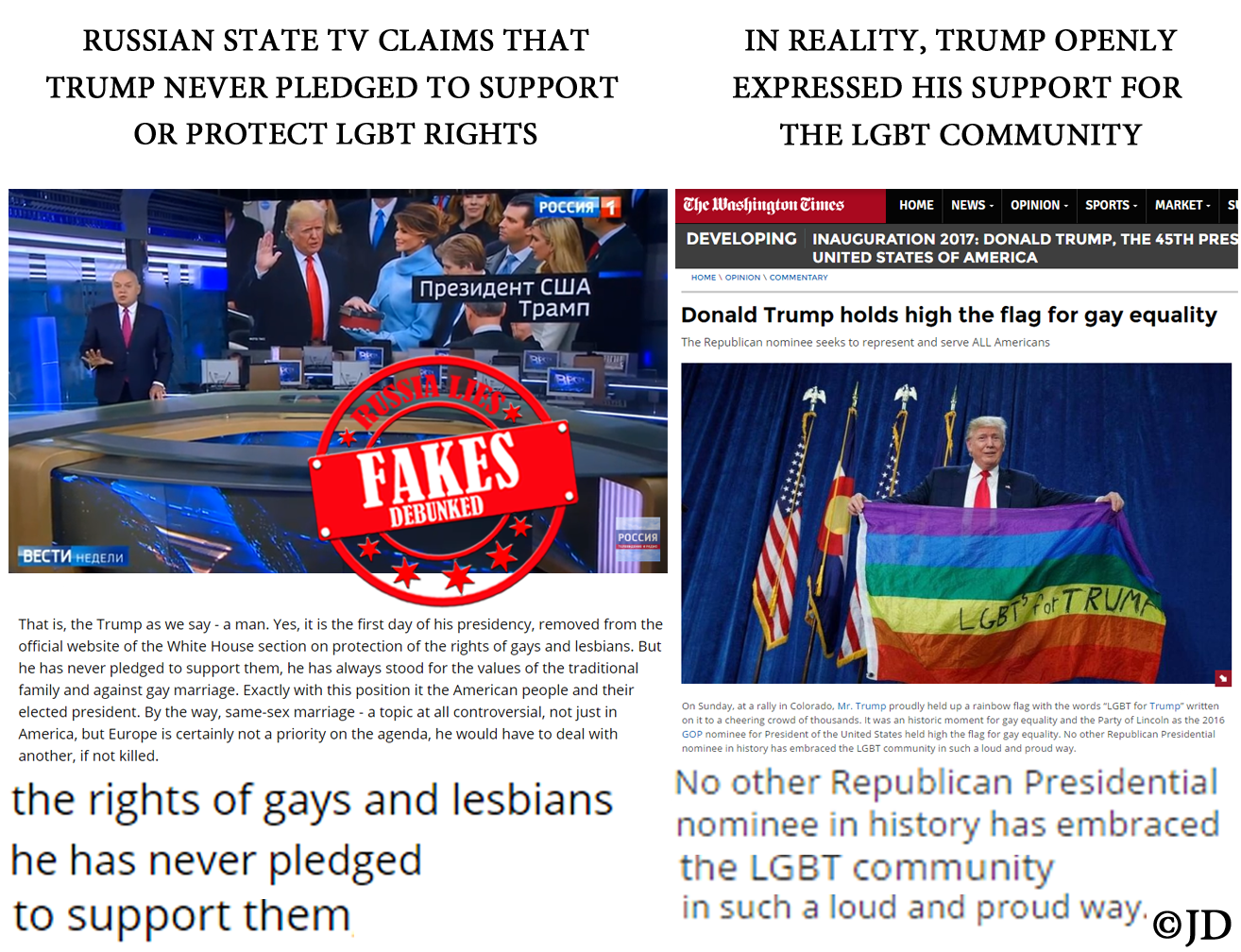 Russia’s state-sponsored Vesti claimed that Trump is “a manly man” (“muzhik”), who is being unfairly criticized for failing to support “the rights of gays and lesbians,” whom “he has never pledged to support.” In reality, Trump did express his support for the LGBT community and their rights during the election. Needless to say, by official Russian standards, that is an unpopular position to take. 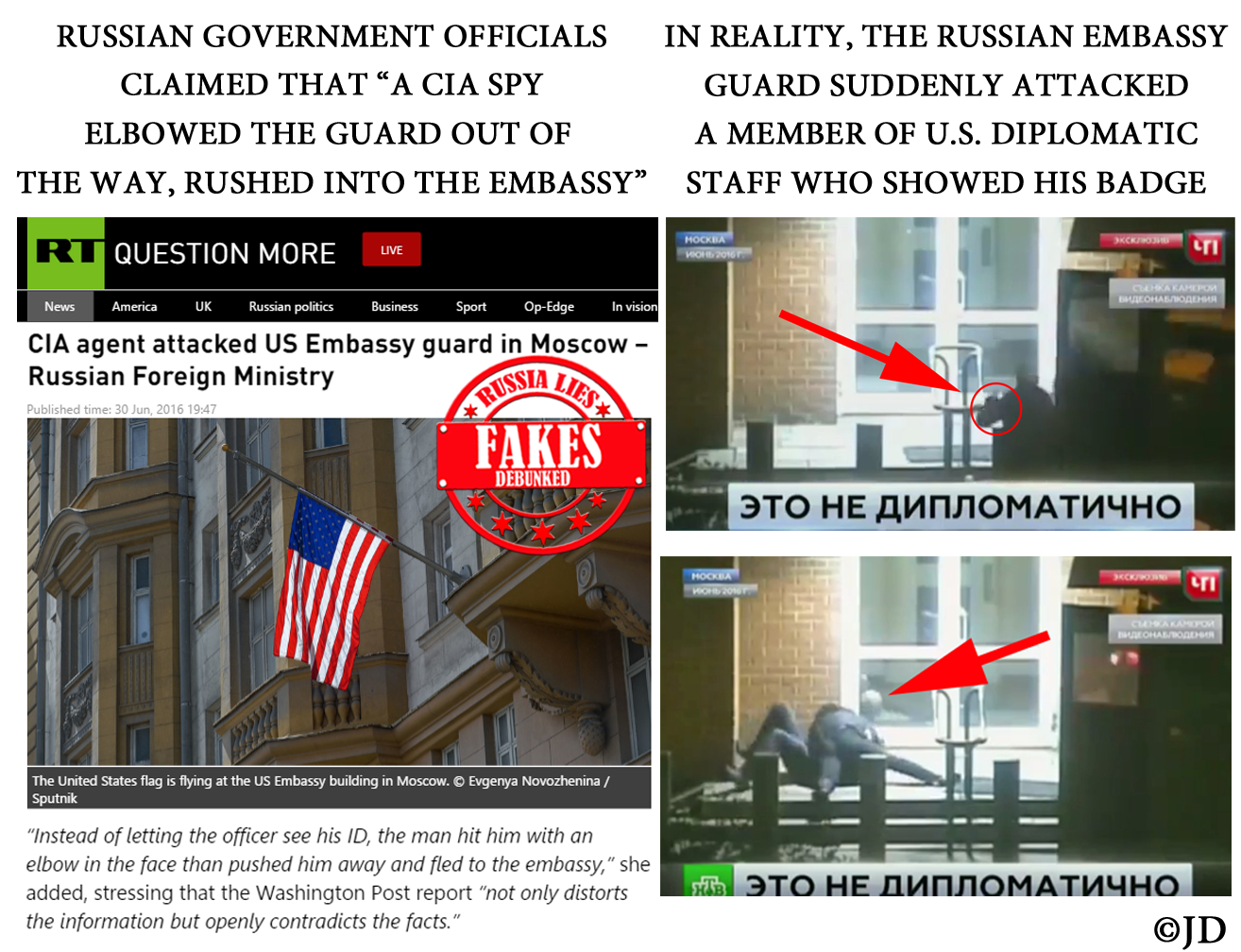 Russian government officials claimed that a “spy” showed up at the U.S. embassy in Moscow, jumped out of a taxi wearing a hat, refused to show any ID, elbowed the guard out of the way and rushed into the Embassy. The Russian media echoed these allegations.

Video, released by the Russian media, tells a different story. A member of the U.S. diplomatic staff arrived to the embassy not wearing any hat (his blonde hair is visible at some point in the video, reflecting in the window), holding up his badge for the guard to see. Instead of looking at the badge, the guard brutally attacked the man, knocking him to the ground and remaining on top during the entire altercation. 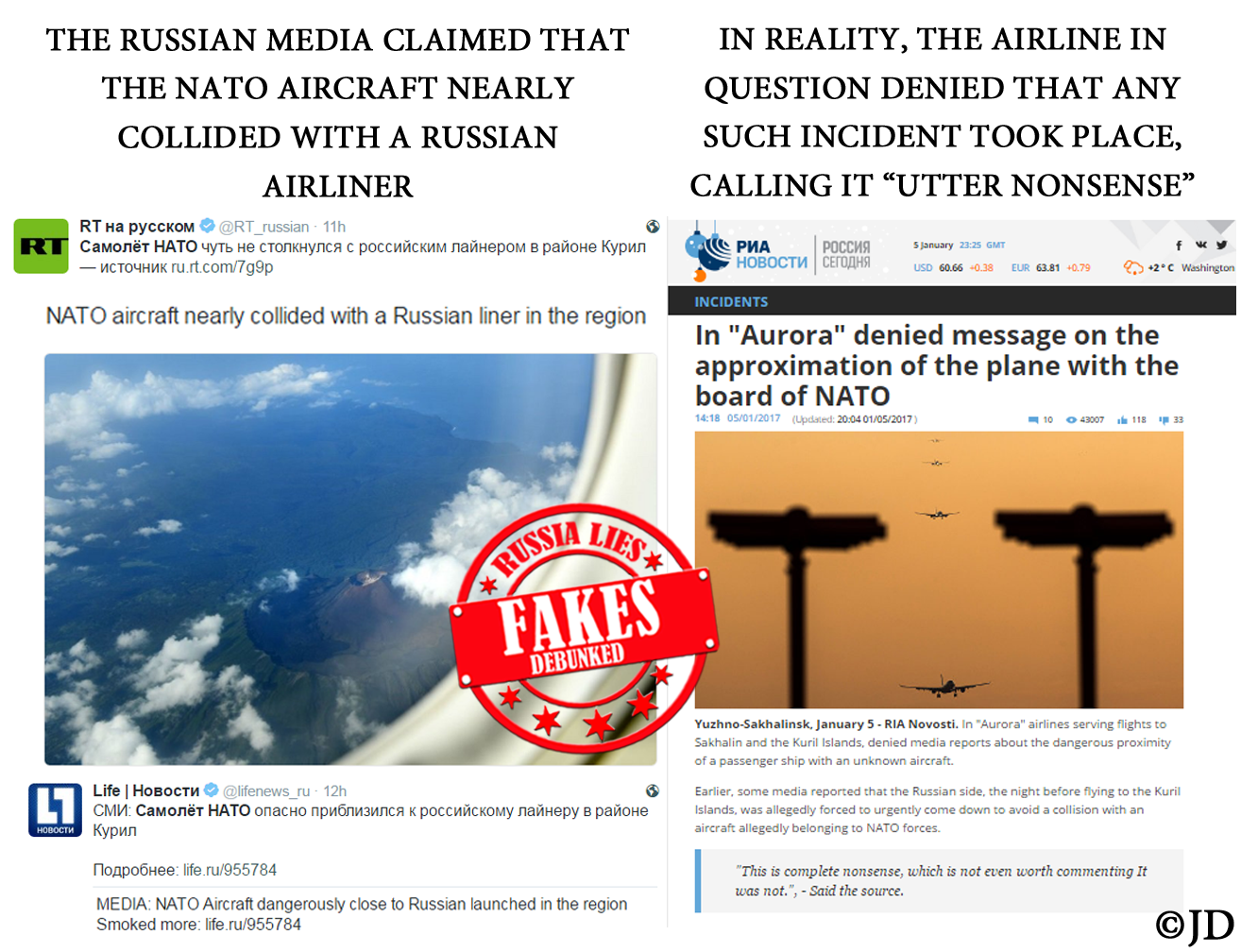 The Russian media claimed that a NATO plane “nearly collided with a Russian airliner.”

The Russian airline in question denied the alleged incident, emphasizing that nothing at all went awry during the flight. The entire incident was fabricated, in a continued effort to portray NATO as an aggressive entity that poses a threat to Russia. 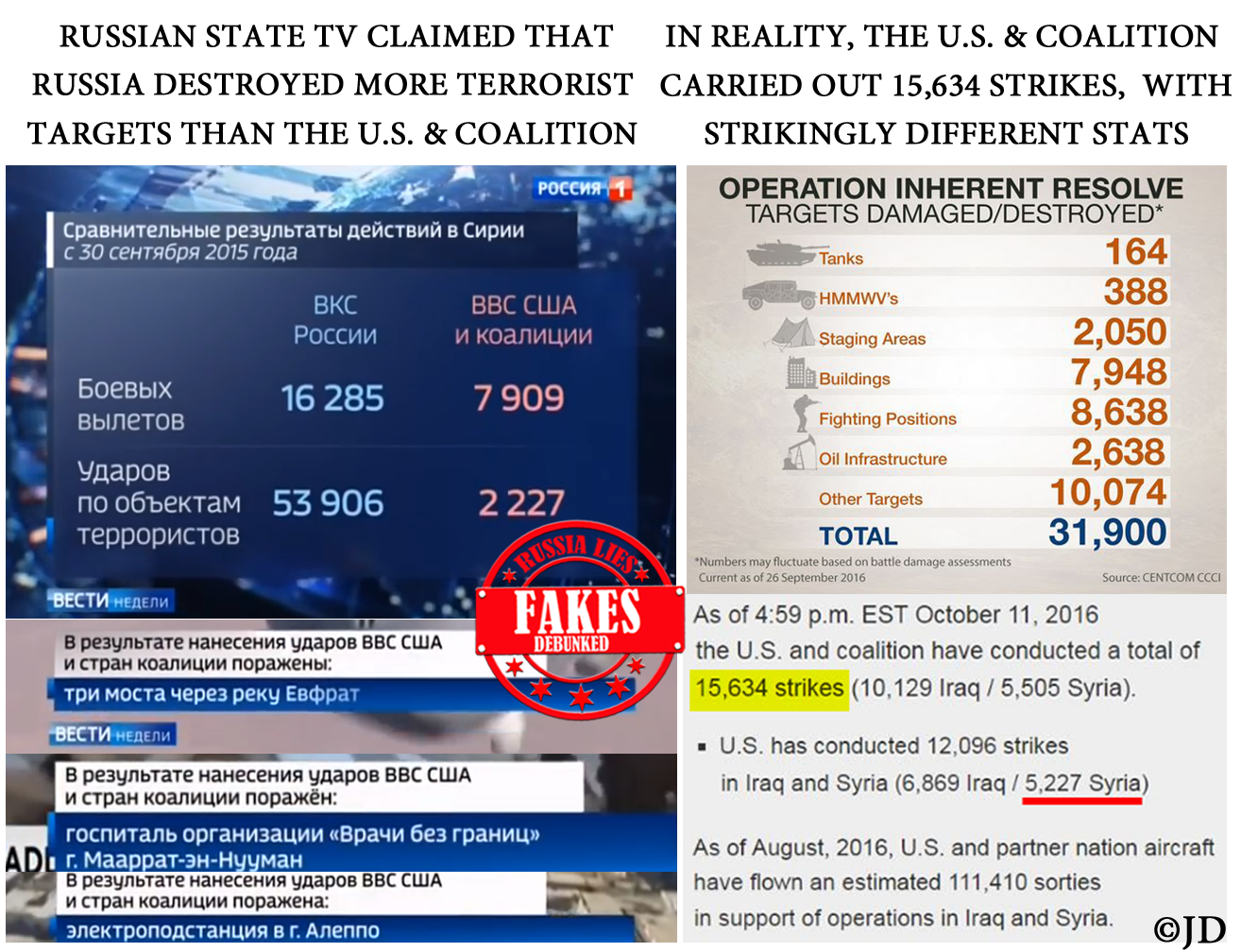 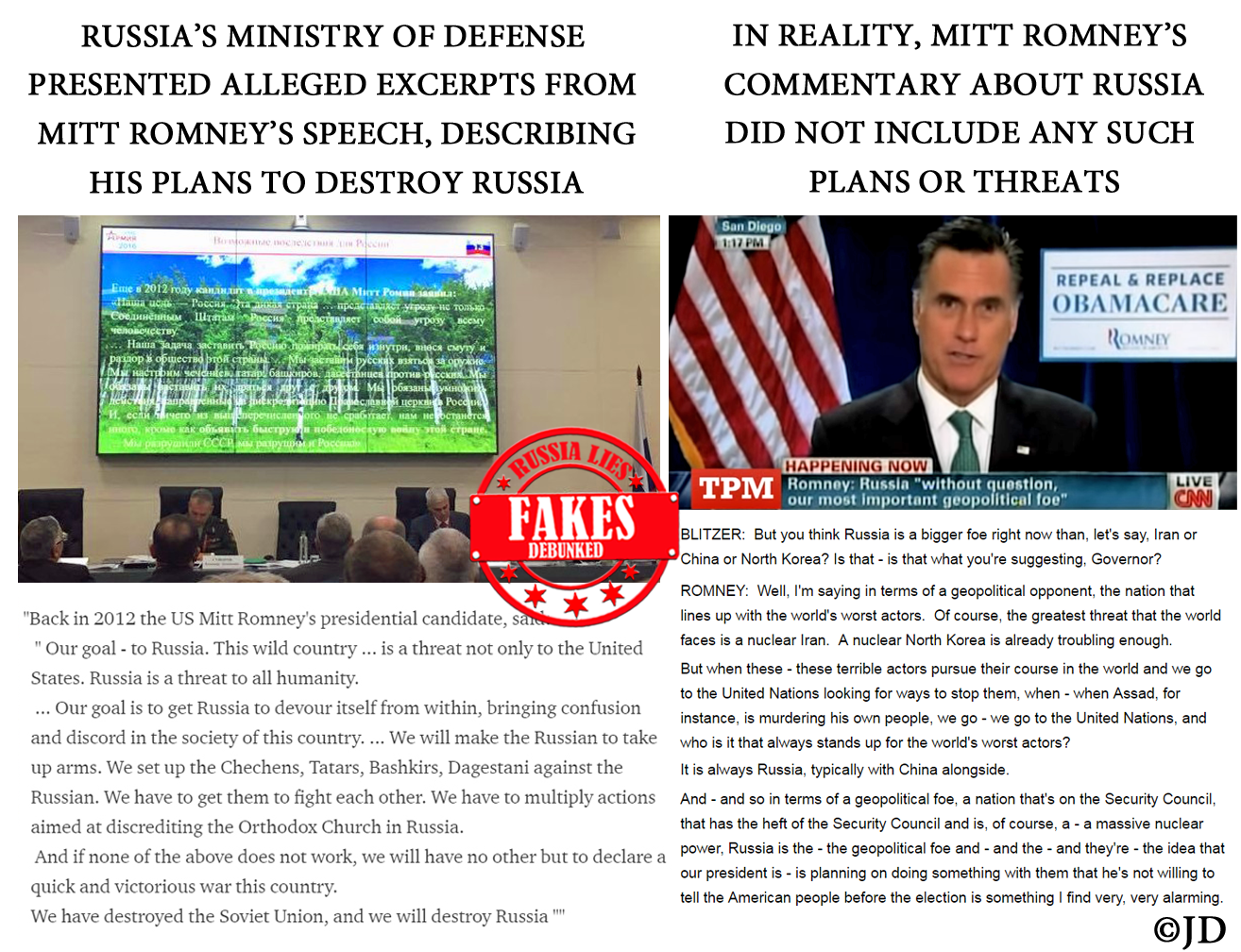 “Our target is Russia. Russia is a threat to the whole human race. Our goal is to force Russia to devour itself from the inside, bringing turmoil and division to its society. … If the series of measures listed above don’t work, we will have no other choice but to declare a quick and victorious war against this country. We destroyed the Soviet Union, and we will destroy Russia.”

Romney’s “quote” was projected on the screen, including the following “measures”: “We will set the Chechens, Tatars, Bashkirs, Dagestani against the Russian… We must make them fight against one other. We must multiply actions aimed at discrediting the Russian Orthodox Church.”

Kuralenko added that “nearly 50 percent of Americans voted for Romney,” emphasizing public support for such views by average Americans.

In reality, Mitt Romney never made any such statements. In fact, his harshest assertion identified Russia as our number one geopolitical foe. Romney never publicly called for Russia’s destruction.

During the U.S. elections, Russian media outlets praised then-candidate Donald Trump for allegedly attacking the International Paralympic Committee’s decision to ban Russian athletes from the 2016 Paralympics. Trump’s quote used by the Russian media stated: “The decision to not admit Russian Paralympians was made by complete idiots, they are the real invalids. How do you explain the fact that athletes from Russia, with all these scandals around doping, still competed at the Olympics in Rio and the entire Russian Paralympic team, which has never been involved in doping scandals, will not go to Rio? Isn’t it just mean and primitive?”

Anywhere in the civilized world, this statement would have been considered deeply offensive, but the Russians were full of praise for their “beloved Trump.”

In reality, Trump didn’t show much interest in Olympic games since 2014, when he blamed Obama for the outcome, and praised Putin for being “so smart” to annex Crimea from Ukraine shortly after the conclusion of the Olympics. 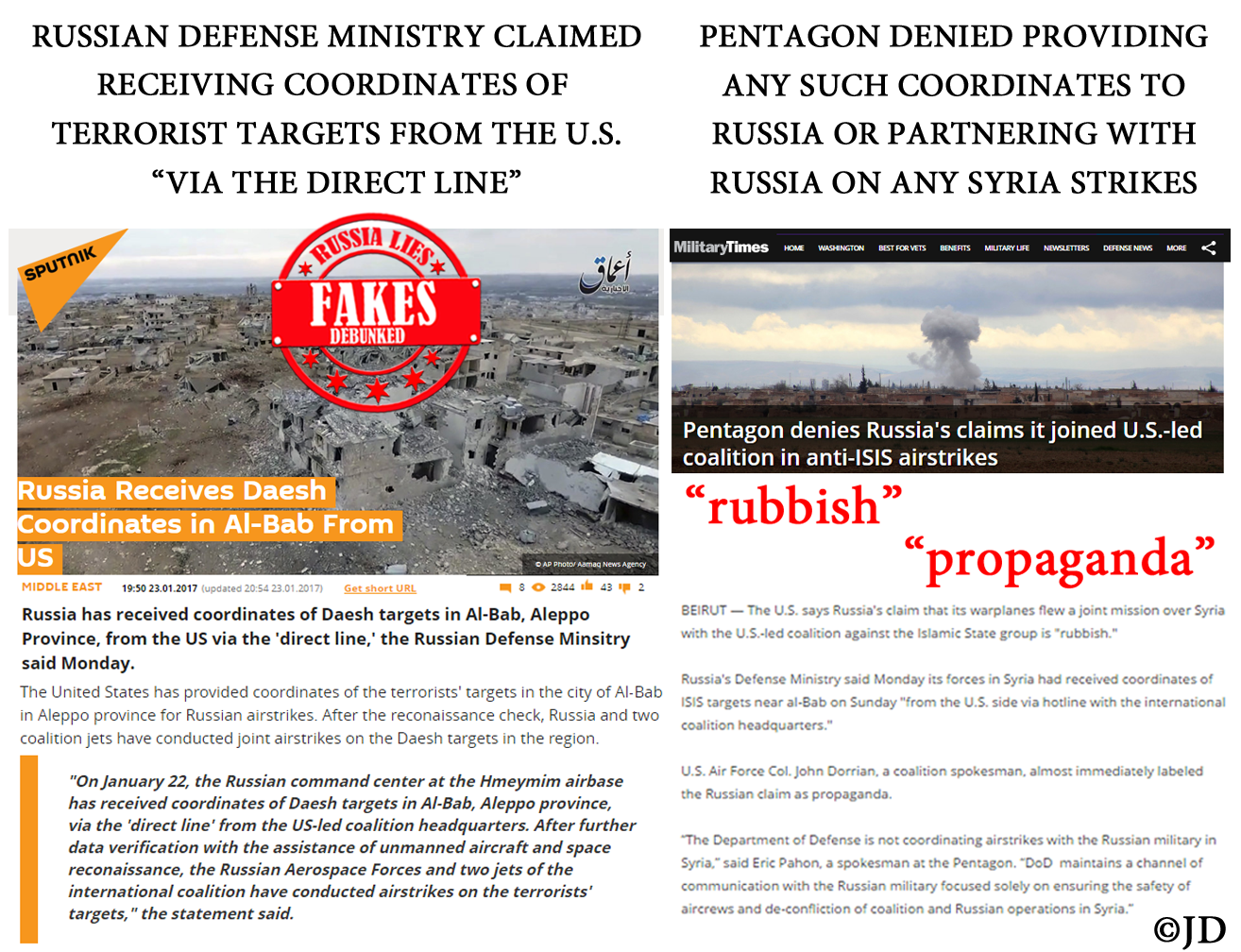 Russia’s Defense Ministry claimed receiving coordinates of ISIS targets in Al-Bab, Aleppo Province, from the US via the ‘direct line.’ The U.S. called these claims “rubbish” and pure propaganda. The Pentagon denied that it had coordinated air strikes with Russia in Syria. 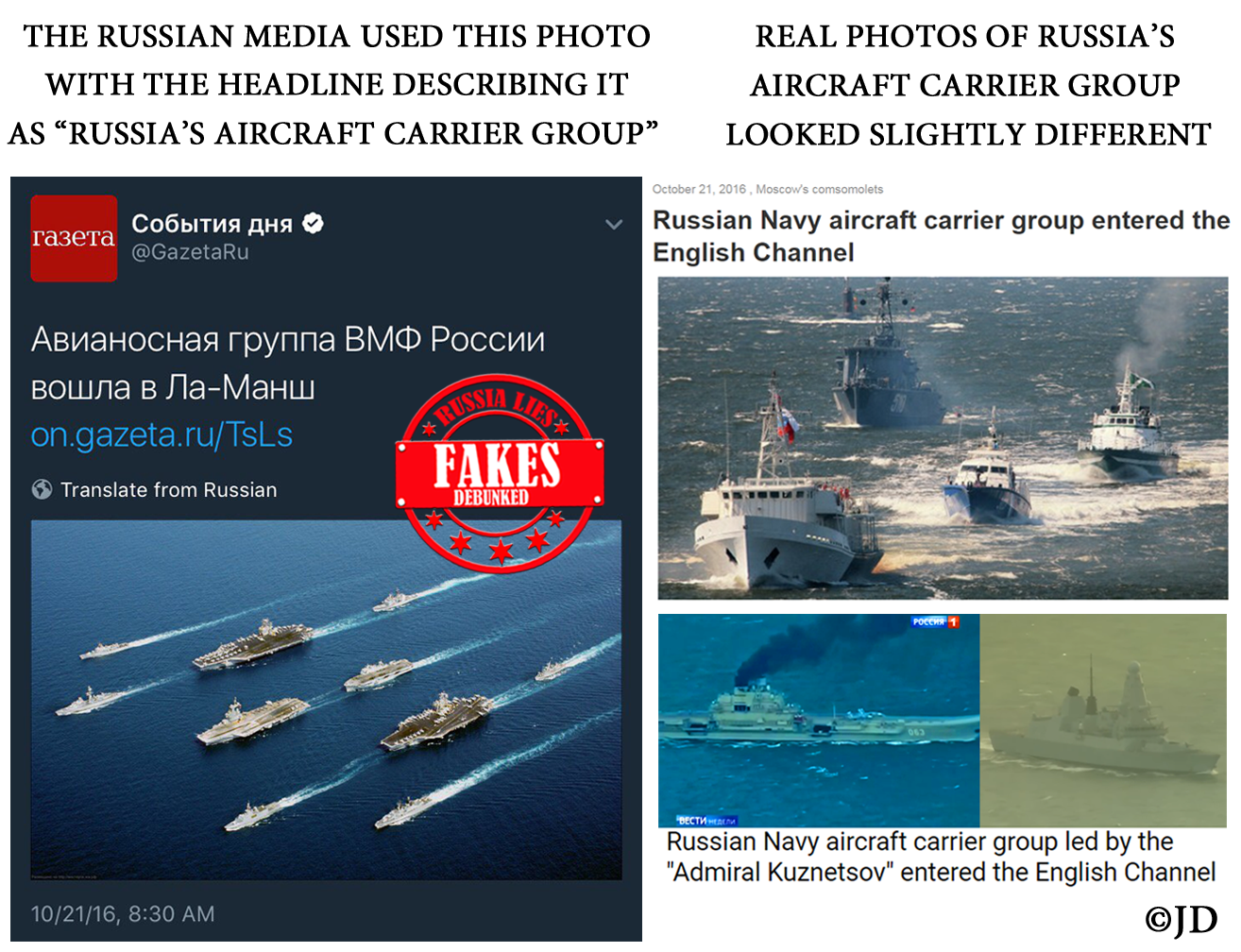 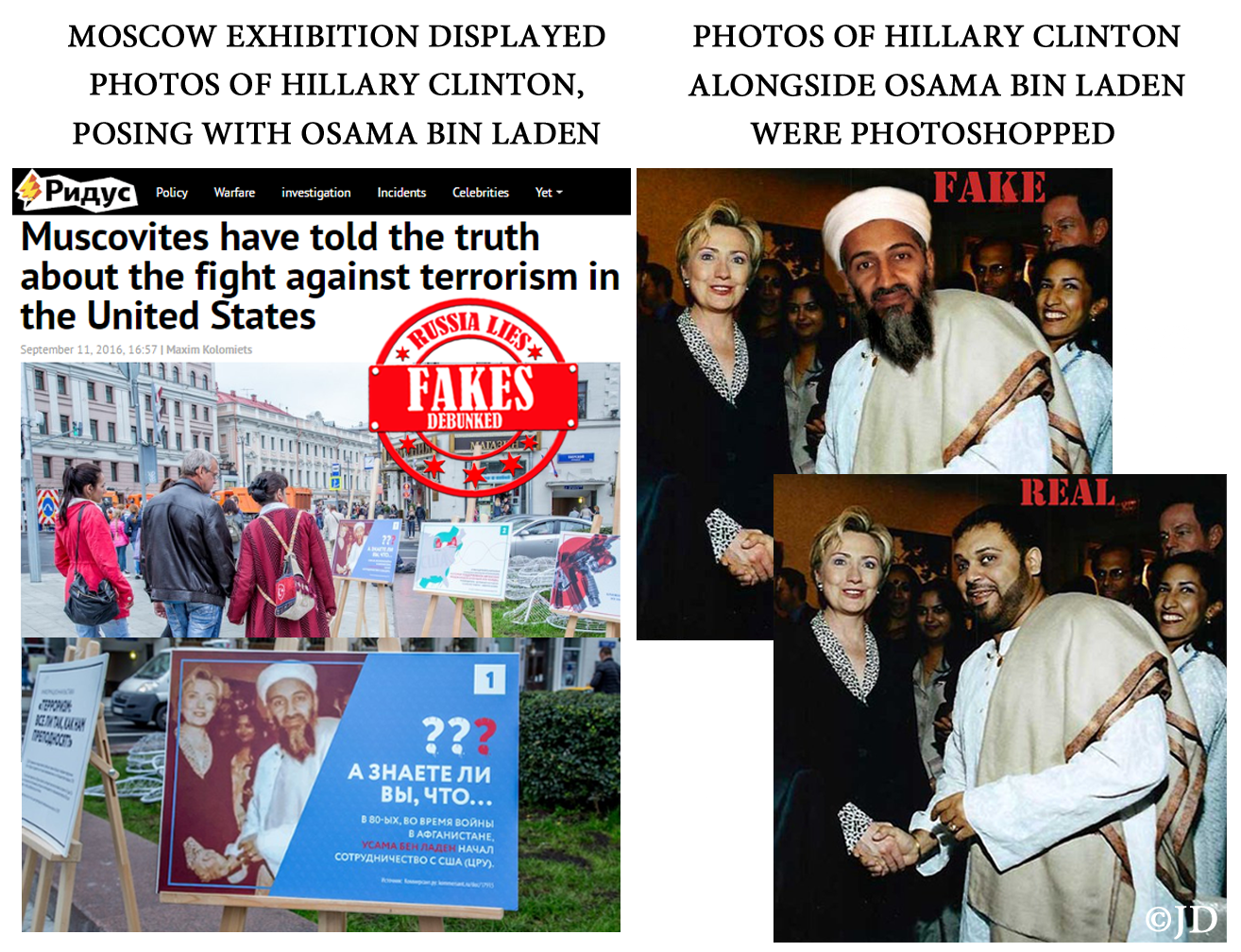 A public exhibition in Moscow (every event of this kind requires government approval) featured a photograph of Hillary Clinton, posing hand-in-hand with Osama Bin Laden. This photo was clearly Photoshopped. The same fake photograph was widely shared on the internet by Russian users, Kremlin trolls and bots during the U.S. election. 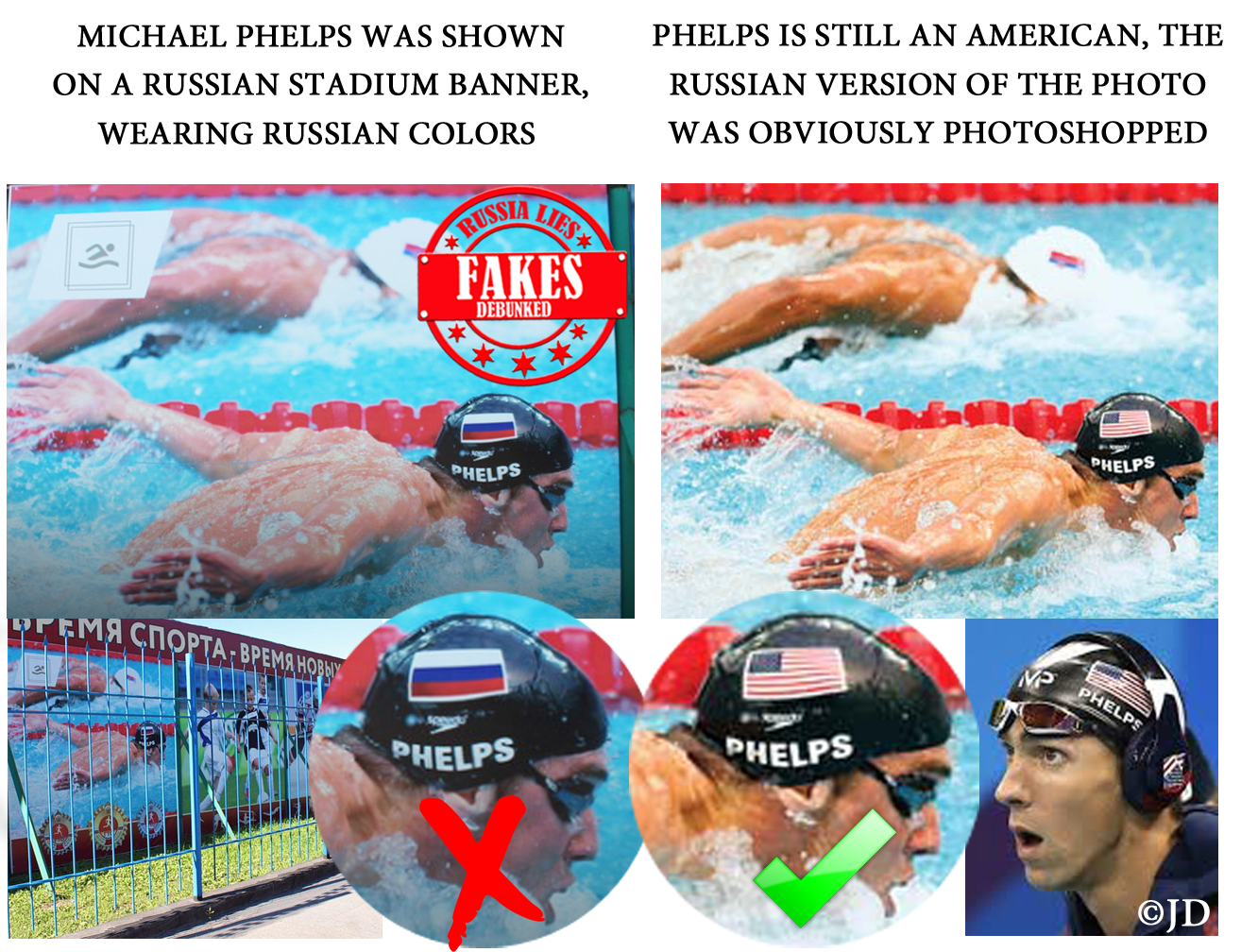 Russian city of Blagoveshchensk has erected a banner, depicting legendary American swimmer Michael Phelps in a swimming cap emblazoned with the Russian flag. The original photo was taken at the 2008 Beijing Olympics, it was Photoshopped to replace the American flag with a Russian one.

Russian state media persistently continues to disseminate the myth of “ISIS fighting on the side of Ukraine” with a long-ranging goal of involving the U.S. into confronting that phantom threat where it does not exist, by artificially recriminating the main opponents of the Kremlin’s aggression against its neighbor as “ISIS supporters.”

Since ISIS fighters are not participating in Ukraine’s struggle against combined Russian/pro-Russian forces, Kremlin propagandists resort to staging fake ISIS “basecamps” in separatist-controlled areas of Eastern Ukraine. This type of staging for videos and photo-ops is a common technique, repeatedly utilized by Russian fake-makers. 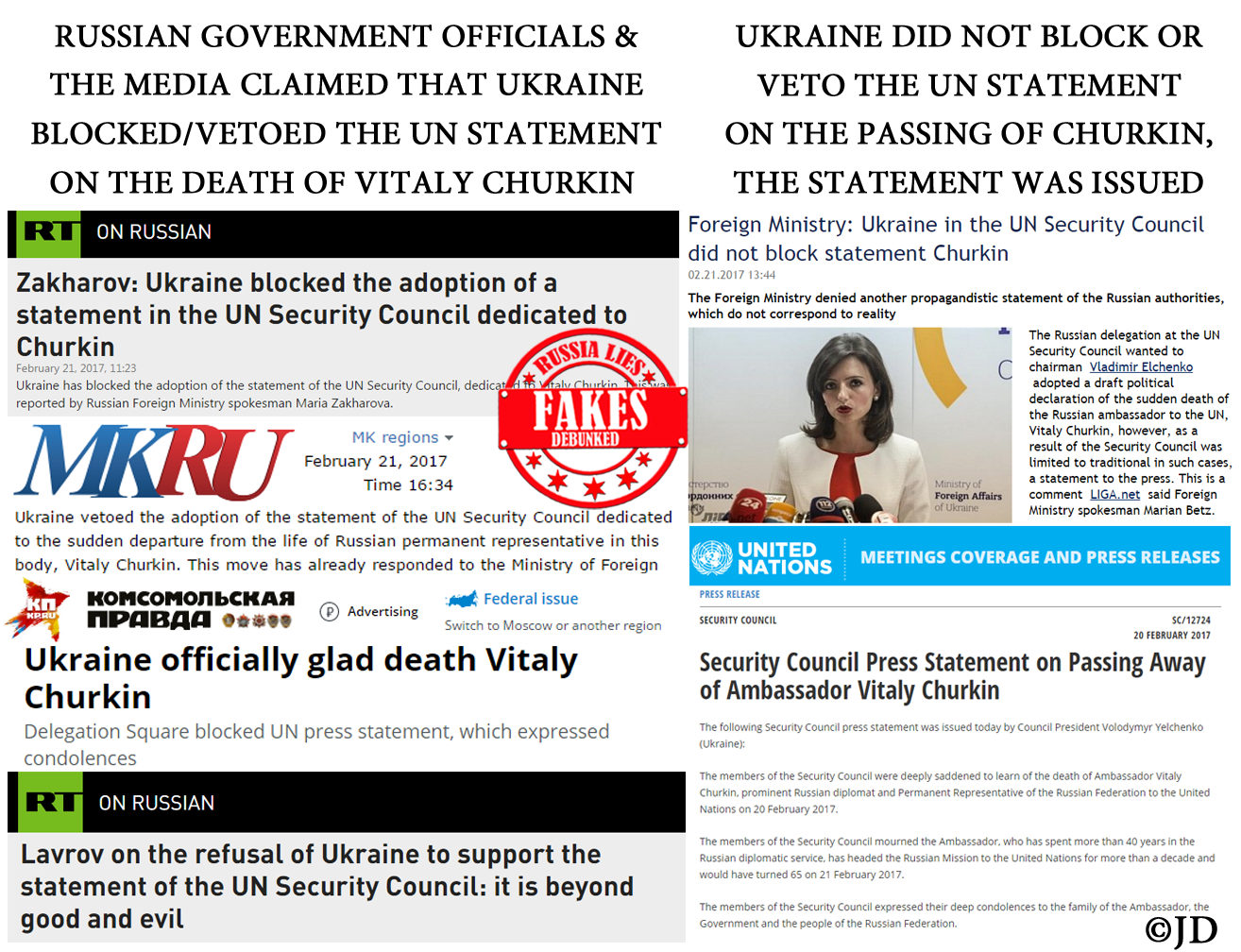 In fact, the UN issued a customary press statement and Ukraine’s Council President proposed a moment of silence in Churkin’s memory. 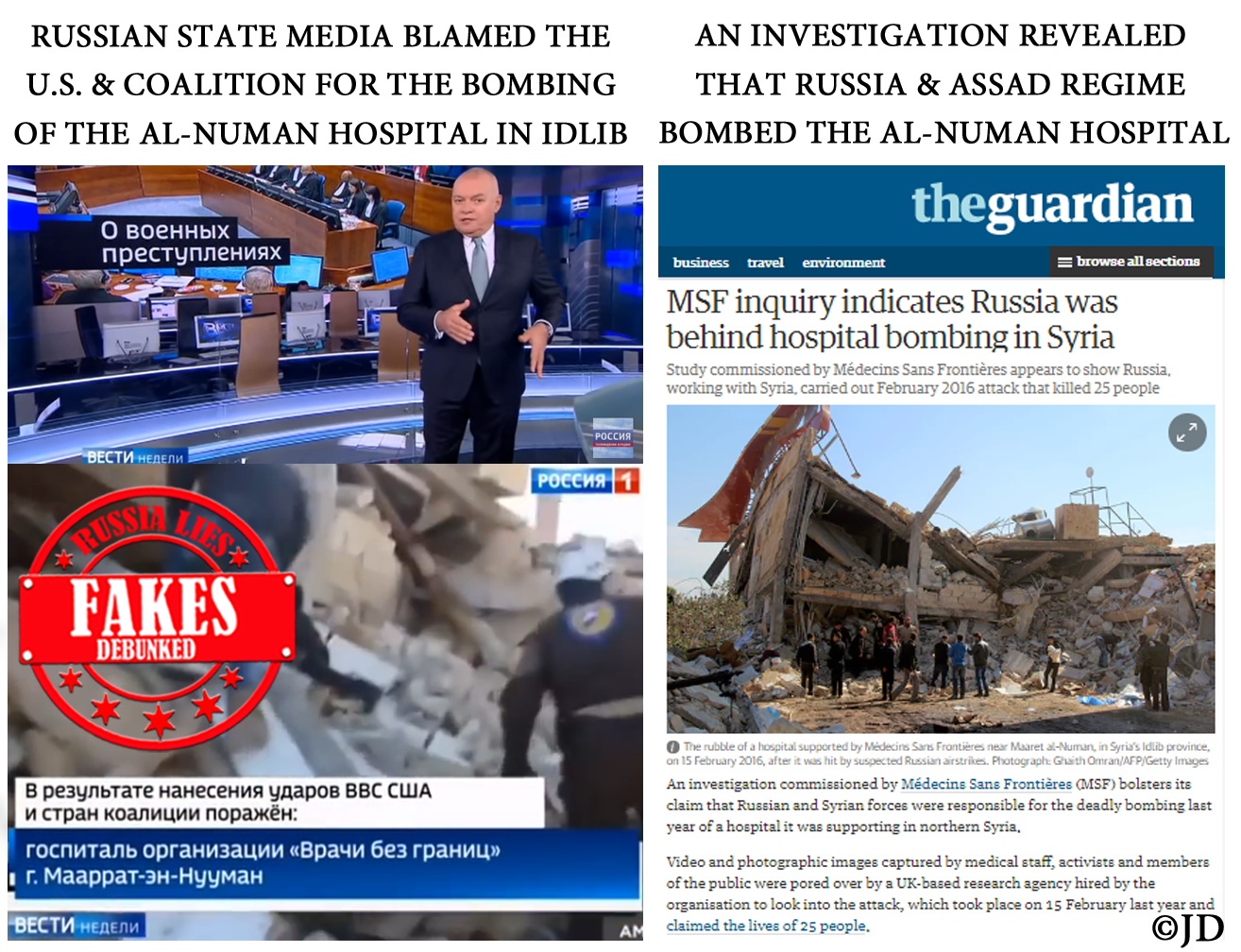 Subsequent investigation has shown Russia and Assad forces were responsible for the bombing of the Maaret al-Numan hospital in Idlib province. 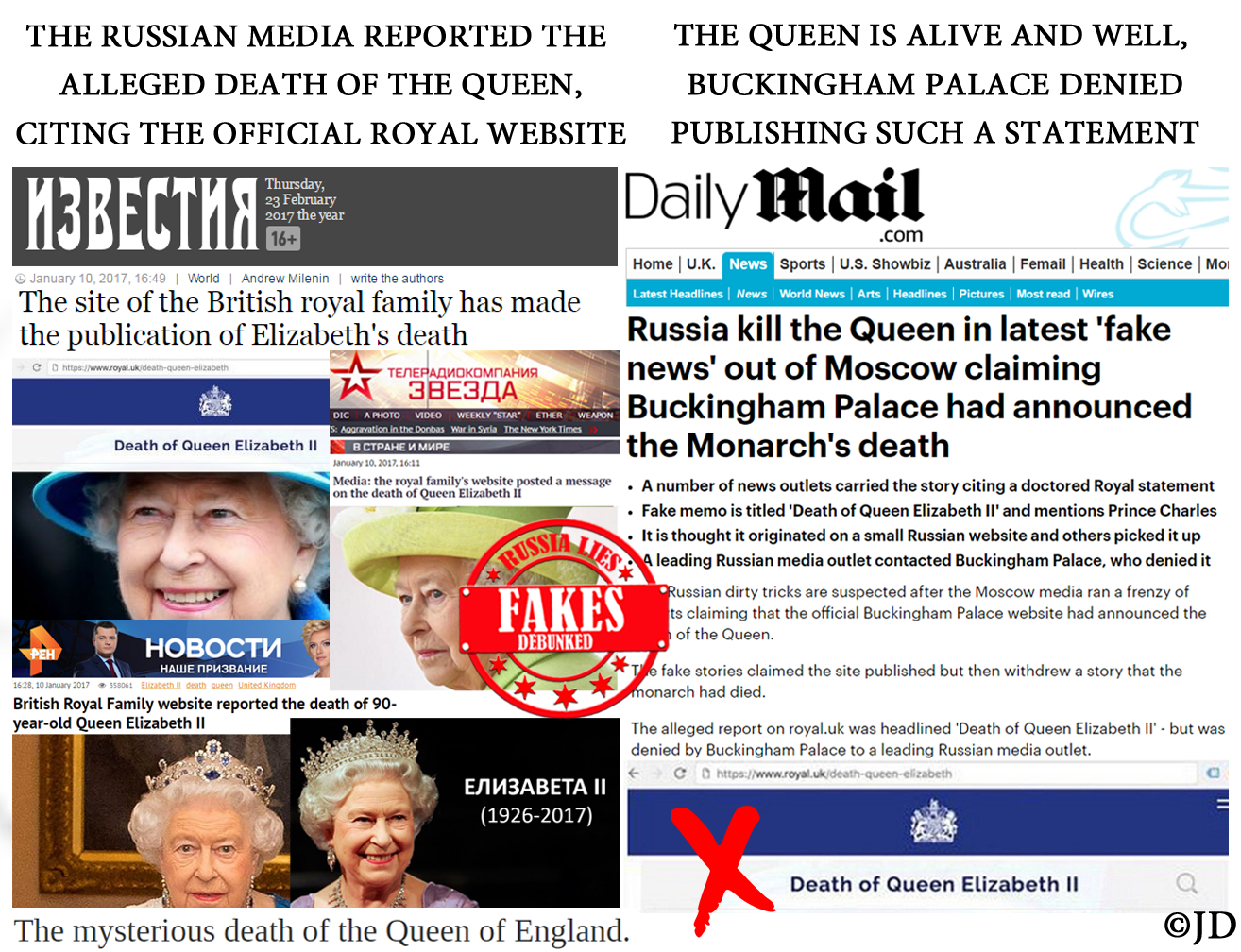 Multiple Russian media outlets reported the death of the Queen Elizabeth II, based on a purported screenshot from the official Buckingham Palace website. At the time of their publication, there was no such posting on the Buckingham portal, but Russian outlets nonetheless went ahead and published their unsubstantiated reports.

Needless to say, Queen Elizabeth II is alive and well.